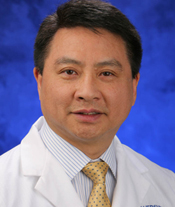 Bone marrow is a sponge-like tissue inside the bones. Most blood stem cells sit in bone marrow and are capable to differentiate into red blood cells, white blood cells, and platelets. Bone marrow failure occurs when stem cells are suppressed or damaged. Diseases such as myelodysplastic syndrome (MDS), acquired aplastic anemia, and paroxysmal nocturnal hemoglobinuria (PNH) are acquired bone marrow failure diseases. PNH arises from a stem cell that acquires PIG-A gene mutation. PIG-A mutation further interferes with biosynthesis of an important cell surface molecule called glycosylphosphatidylinositol (GPI) and make cells vulnerable to complement attack. Acquired aplastic anemia is usually caused by an immune attack on bone marrow stem cells, which makes bone marrow unable to produce enough red blood cells, white blood cells, and platelets. Immunosuppressive therapy is highly effective in treating patients with aplastic anemia. MDS is also a disease in which the damaged bone marrow stem cells fail to generate enough healthy blood cells. Because of their common clinical presentation, it is often hard to distinguish these disorders. For example, many patients with MDS and aplastic anemia also contain small populations of PNH-like cells in their blood. Moreover, 0.002% white blood cells in healthy individual are PNH-like cells; however, these PNH-like cells develop from more mature cells called progenitors, which are not able to reproduce themselves and therefore do not cause disease.

It has been found that some aplastic anemia can transform to PNH with time, and both PNH and aplastic anemia can progress to MDS, but MDS almost never leads to aplastic anemia or PNH. However, the clinical significances of these small PNH-like cells in MDS and aplastic anemia are still unclear. The goal of this project is to understand the relevance of PIG-A mutation in MDS patients and aplastic anemia patients, and to explore unique clinical implications of these small PNH-like cell populations in managing patients and in predicting disease progression/transformation. Our preliminary data suggest that the PIG-A mutations that occur in aplastic anemia are similar to those occurring in PNH in that they arise from stem cells. In contrast, the PIG-A mutations that occur in MDS arising from progenitors, similar to those found in healthy persons. This likely explains why MDS patients seldom, if ever, evolve into PNH. It suggests that finding a small PNH-like cell population in MDS patients is not a reliable surrogate for needing immunosuppressive therapy. In addition, the novel assays we have developed to detect PIG-A mutations may help distinguish MDS from aplastic anemia. More importantly, our preliminary data reveal that harboring small population of PNH-like cells in MDS may be a marker of genomic instability and may predict leukemic transformation. We are working hard to recruit more eligible patients to verify those preliminary results. We are expecting to translate those research findings into a clinical trial in the near future.

It was a very exciting year working on this project. We are looking forward moving into the second year of this study.

Jeffrey J. Pu, MD, Ph.D. is an assistant professor of medicine at the Penn State Hershey Cancer Institute and Penn State College of Medicine. Prior to this position, Dr. Pu was a senior clinical/research fellow of Hematology at the Sidney Kimmel Comprehensive Cancer Center of Johns Hopkins University. He also did an NIH-supported experimental hematology fellowship and a clinical transfusion medicine/blood banking fellowship at the Lindsley F. Kimball Research Institute of New York Blood Center after finishing an internal medicine residency at Mount Sinai School of Medicine.

Dr. Pu received his Ph.D. from New York Medical College in New York and his MD from Shanghai Jiao Tong University School of Medicine in Shanghai. As a physician-scientist Dr. Pu’s research interests include hematopoiesis and stem cell biology. He is currently focusing on bone marrow failure disease translational research, especially the relevance of Glycosylphosphatidylinositol (GPI)-deficient cell population in patients with acquired bone marrow failure diseases. Dr. Pu is a board certified physician.