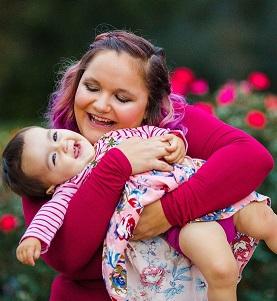 Aplastic anemia entered my life when I was 20 years old. I was visiting my grandmother in Delaware when I first noticed some of the symptoms.  I was feeling fatigued and was getting little pinpoint bruises all over my legs, now knowing it was petechiae.  I went to the doctor – no blood work was done at first, but I returned a few weeks later because the fatigue had become extreme. At this time, I was starting to suspect some sort of anemia, where I could barely get up without being out of breath and my therapist pointed out to me I had very pale lips and skin color.

This time I asked for blood work. After blood work was done, my primary care doctor called right back to say to go to the emergency room at Children’s Hospital in Boston and that I should not drive there myself. She also called my mother and explained she thought I had leukemia or a bone marrow failure. After getting to the hospital, the ER hematologists spoke with me about leukemia and sent me in for an emergency bone marrow biopsy. That bone marrow biopsy confirmed aplastic anemia.

The next step was to see if my brother was an HLA match for possible transplantation and to check my family to see if this was aplastic anemia of a genetic origin. My brother was not a match, which they had prepared me for since it’s only 25% chance, so the treatment team decided to go with the standard treatment of horse ATG and cyclosporine.

This treatment started two months after the diagnosis and I had good results from it. I responded quickly with very few complications. After about a year we started the weaning process from cyclosporine because I was doing so well. About 6 months later, after I had finished being taken off the treatment, it was observed by my endocrinologist during our yearly routine visit that my blood counts had dropped again.  I went back to my hematologist, who confirmed through more tests and another bone marrow biopsy that I had relapsed.

At this point, she decided that an unrelated bone marrow transplant was the next step. A search was begun, taking a full three months because of the DNA in my blood and the DNA in my marrow were different, which happens in some patients. After a few failed attempts of searching the registry my hematologist searched the national registry finding a man in Germany who was a fully matched unrelated donor and who was willing to donate.

I knew the pre-transplant preparation involving chemotherapy and radiation would not be pleasant, but I also wanted to take steps to preserve my fertility. So, I had some of my eggs retrieved and preserved, and a hormone suppressant was also part of this process to stop my period and protect my ovaries.

I found the radiation affected me more than the chemotherapy causing extreme fatigue. I slept most of my 30-day hospital stay. Horse ATG was again part of the treatment and this time I had a severe allergic reaction to it. After a day in the ICU they switched the horse ATB to rabbit ATG and the rest of the process went smoothly.

It’s hard to recall the transplant experience itself since I was so exhausted, but the transplant took place in the early hours of the morning, a had a smaller than “normal” bag (normal by what I had seen in others photos) They had to remove most of the hemoglobin since my donor was not a blood type match and I have had blood transfusion reactions in the past.

After the transplant, it took a full two weeks before any small indication of engraftment was seen. I was released when the treatment team felt my blood counts had risen to safe levels. I did engraft quickly but still had restrictions and had to wear a mask anytime I was in public or near other people. But I was removed off restrictions quickly since my body had responded so well to my bone marrow transplant.

If I have any advice to give to newly diagnosed patients it is to be present and attentive. Be a part of the process no matter how difficult it may be. Ask questions and try and stay informed. Create emotional support whether through family, or professionally through therapy. It is important to remain positive through this experience -- even when you feel it is impossible. I too, sometimes felt it was impossible but always tried to stay positive and just try and conquer each day as it came.

Like many others, I do think of my transplant day as my ‘new birthday’, and it’s been almost 5 years now. My fertility was miraculously not affected since I was able to conceive and deliver a baby who will now be 2 and a half  as of November 2018.