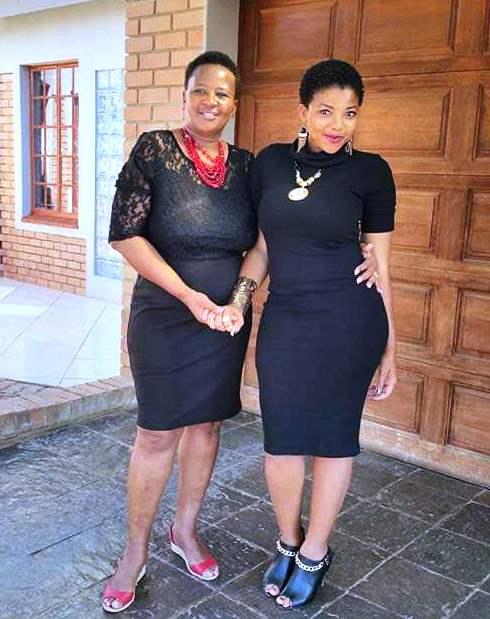 As a girl in South Africa, I was healthy and active. I started college at the University of Limpopo, studying Business/Accounting in 2011.

The next year, though, I started having unusual symptoms. I felt so exhausted that I had trouble getting out of bed.  Then in October I noticed other changes. My skin was pale, and I had bruises all over.  Because my skin is light brown, I didn’t make much of it.  When I saw my dentist that month, the cleaning took longer than expected.  The dentist handed me a solution to rinse my mouth, but my gums continued bleeding.  When she noticed the bruises on my wrist, arms, and upper body, she sent me for blood work to find the cause.

After a few days, the dentist called, asking me to bring my mom with me to her office right away.  When we arrived, she told us that I had to go to the hospital right away, and to be prepared to stay for several days.

At the hospital, the specialist Dr. Oswald Jannasch told us that I needed a bone marrow biopsy and aspiration.  I had two painful bone marrow biopsies, but the doctors told us they couldn’t determine the type of blood disease I had from the specimens that were collected. They thought the samples were not good enough to determine what was wrong. As for me, I wasn’t worried.

My platelet count was so low that I needed a blood transfusion. I also began taking 12 doses of medication daily, including prednisone.  This is when Dr. Jannasch told us I had a life-threatening bone marrow failure disease.

After two weeks in Mediclinic Limpopo, Dr. Jannasch called my mom and me to his office. He told us that I needed to see a doctor at Pretoria East Hospital who specialized in blood diseases.  Within a few days, Dr. Jackie Thompson’s office called my mom. She insisted that my mom bring me to Pretoria East Care Hospital immediately; my life was in danger.

When we arrived at the hospital, we were brought to Dr. Thompson’s consultation room.  She was going to send us to Lancet Laboratories for more blood tests. She also was ordering a bone marrow biopsy as soon as I was admitted.  I cried bitterly, remembering how painful that procedure had been, but she assured me that it would be performed under anesthetic.

I knew my mom was worried. I had an uncle who passed away from leukemia in 2006, so I knew she was comparing my experience to his.

The sisters (nursing staff) welcomed us to the hematology ward and to my room. At the time, I think I didn’t feel the shock and frustration because my mom was there with me. She stayed with me during the bone marrow biopsy, watching over me while I felt no pain at all!

That same day, Dr. Thompson, the hematologist, gave us the diagnosis: severe aplastic anemia. She described the treatment plan, and I stayed in the hospital for more transfusions to help maintain steady blood cell counts. After a few more days in the hospital, I was discharged to wait for approval of the treatments.

By God’s grace, the hospital called after five days to say the treatment plan had been approved! That same day I was readmitted to Pretoria East Netcare Hospital. Dr. Thompson explained that they would give me horse ATG for my treatments. The J-Line was put in after two or three days, then I received ATG for three or four days.

After receiving ATG, I had severe side effects, including severe joint pains and seizures.  In fact, the seizures almost cost me my life.  One of them happened while I was in the bathtub, and the other one happened when my mom left the room for a little while.  I remember being in my hospital bed, holding my cell in my hands, when I saw the letters on the phone changing.  I didn’t know what happened after that, but I found out later that they took me for a brain scan.  They determined the seizure had been caused by cyclosporine.  I spent a few days in the ICU, then returned to the hematology ward where I started Prograf.

After discharge, I saw the doctor once a week for a month. My platelet count improved while I continued taking Prograf tablets.  Then I continued with doctor visits every two weeks, then monthly, and now annually.  I thank the good Lord that my aplastic anemia is in remission.

Unfortunately, the treatment caused avascular necrosis of both hips and shoulder. Between 2014 and 2017, both my hips and shoulder were replaced at the same hospital by one of the best orthopedic surgeons in South Africa, Prof Le Roux.  Dr. Heather, a psychologist at the hospital, helped me stay positive and make these surgeries as stress-free as possible.

I was asking myself, “Why me?”  My mom was with me the whole time. My family and fellow Christians were by my side in prayer. I believed in God for my healing.

My condition is now stable, with no medications and only an annual check-up.  No one can say why I had this life-threatening disease, but it made me part of who I am today. I appreciate life and all the little things so much more.  I believe my story shows that no matter how many hurdles this disease throws at you, you can overcome it. My family and my friends were my support system. Reading inspiring stories from AAMDSIF helped keep me strong. Life is now very good!

My advice for anyone who has a new diagnosis of aplastic anemia is, “Don’t let it get you down!” I have always been an optimistic person but I do hear about patients who just give in to sadness, depression, and fatigue.  It will get the best of you if you let that happen.

I just completed my degree in Business Management! I want to raise awareness in South Africa about aplastic anemia and organ donation.  I am developing a proposal about this campaign that will include South African professionals, foundations, and sponsors.  I want to create a traveling exhibit that would visit transplant hospitals, schools, and universities all over the country.  I plan to record interviews with health professionals, patients, and donors’ families.

From this work, I will create a documentary to distribute by public media, featuring stories that will generate hope and motivation for those who need transplants to live.  I have big plans!