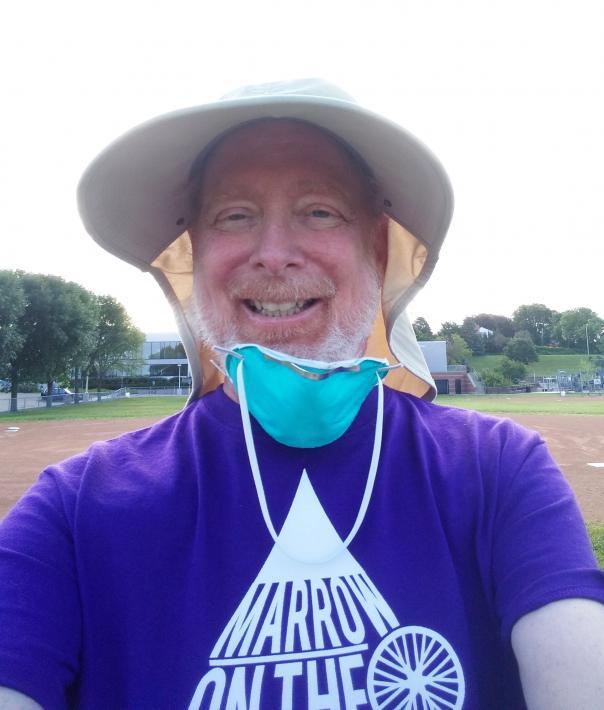 Early in 2010, thousands of us had just been laid off and I had decided to start an RN nursing career. I was 47 years old, but in May I was diagnosed with MDS after a routine physical. I had a follow-up appointment with a hematologist oncologist over the summer, and a bone marrow biopsy in August, which was definitive for MDS-RCMD (Refractory cytopenia with multilineage dysplasia).  I had a consultation with the bone marrow transplant (BMT) director at Washington University Medical School in St. Louis.  He said that I would probably need blood transfusions within 3 years and a BMT within 6 years.  As a scientist, I started doing my research and discovered AAMDSIF.

Well, I had a good 8 years until shortness of breath caught up with me in May 2018. My hemoglobin was about 6.6 (low normal for a male is about 13.2).  My colleagues at work said on that day, you look really pale. "I know, I'm really short of breath," and I'm a nurse and we all work in healthcare!  I drove to the University of MN Medical Center (UMMC), and had my first red blood transfusion the next day.

I consider myself fortunate and thankful to G-d. Later in this story I will explain more why I am fortunate.

In August 2017, before progression of the disease in 2018, I attended an AAMDSIF conference in Minneapolis. There I met one of the physicians giving the seminars through one of the attendees, a long-term patient of that physician.  I liked the way this physician presented herself and asked if I could have a consult.  She answered happily, so I made an appointment for October 2017.  I was feeling fine but wanted to meet the people who would eventually do a BMT when/if things progressed.  She was great: I liked the attention, the way she listened, her replies and straight answers, and her experience with balancing treatment with Quality of Life.

In December of 2017, my son visited and we skied cross-country 4 miles around the lake in Ely, MN.  Only five months later, I needed blood transfusions for shortness of breath.  There, I was told that I was now really on the path to a BMT, which scared me.

Over the summer of 2018, at 55 years old, I received Vidaza treatment at Regions Hospital, with the outpatient hematologist-oncologist who had been watching me since I moved to Minnesota in 2011.  He's great and sees patients with the physician at UMMC.  This gave me continuity of care, so important for quality medical care and for patients' peace of mind.  In October 2018 I came down with a 101-degree fever and tachycardia (signs of febrile neutropenia and possible blood infection - "sepsis" or "bacteremia"). I spent 10 days in Regions Hospital as they tried to figure out how to treat me with the least risk and toxicity.  I made a consult appointment with my physician at UMMC to see what she thought.

She said, "It's time," time for a BMT.  She estimated I would only live one to 12 months without a BMT.  "And, it might not be a good 6-12 months."  We talked more; I asked her to "sell" me the BMT -I was going to do it regardless but, besides the 6-12month prognosis without the BMT, I wanted her to give me good, positive reasons for getting a BMT. Bone Marrow Transplants are not a “walk in the park.”  She did.  I found the healthcare workers at UMMC to be quite responsive to my concerns, sharing the facts, both risks and benefits, as well as their own concern for me.

Late November 2018, I went into the hospital to have myeloablative induction therapy with full-body radiation and chemotherapy. Then 9 days later the actual drip, drip, drip of newborn umbilical cord stem cells flowed through an IV into me.  Kinda like being reborn, but . . .

The UMMC physician and I had agreed on the aggressive myeloablative induction therapy because it would give me the best chance that I would not relapse.  Given that I had a "less than good" mutation, RUNX1, and the medical literature clearly states that myeloablative induction therapy reduces relapse, so I went with the harsh treatment option.  I think it carries a higher risk of toxicity and death, but if you make through the first 100 days after BMT, the risk is about the same as other induction therapies.

I had some kidney and infection complications in the hospital that kept me in 2-3 weeks longer than typical.  I lived in isolation until the last two weeks when I could walk the halls and actually got stronger.  That felt good.  I like to be active and to be stuck in a room, de-conditioned, feeling weak and nauseated - it's just not my style.  Since coming out of the hospital, I have had some bumps and pot-holes in the road to restoring Quality of Life, but it is happening.

I'm Fortunate:
I am now able to walk half a mile, carrying my backpack with a computer.  No shortness of breath but there is fatigue.  I have the attention to read and learn how to program as well as keep up with healthcare and nursing (I'm a real nerd).  Had I not had the progression of MDS when I did, I would not have been allowed to have myeloablative induction therapy (and its complications) because I would have been too old for the cut-off.  My physician, who I met at an AAMDSIF conference, specializes in MDS and is recognized around the world.  The bone marrow transplant program at UMMC seems well designed and executed and brings me comfort that I have the care that I need.  I have a girlfriend who cares, has made my coming home comfortable, and who is also a “straight shooter” and competent.  I had 8 years without progression to help my children navigate teenage years and enter adulthood prepared.

The last 9 years of my life have probably been the happiest and fulfilling of my life, though I miss my old colleagues.  Sure, there were reasons that my previous life was difficult (though happy in many ways, too). At first, I thought the end of the world had come when I received my diagnosis in 2010.  It paralyzed me up to a point---though I did not tell my children for 4 years because I didn't want to burden them.  Maybe I was able to experiment with my life because I felt that I didn't have much to lose?
Over the years my friends and colleagues made some good things happen for me.  Working for a pharmaceutical company gave me some resources to draw on during this time.  Working out and eating well before the transplant, I was told, helped me through hospitalization.  My colleagues and girlfriend gave me hope and inspiration.

A severe diagnosis, severe illness, and complex treatment upended my life.  I have been fortunate to be able to go through the harsh difficulties and I thank G-d for helping me and all my supporters.  There is so much going on.  I suggest that people contact other MDS patients and BMT patients through the Foundation to gain an understanding of their options and to find healthcare workers who are positive and at the same time straightforward. Then, we can find options and real solutions for our many ups and downs.  These include social, financial, emotional, knowledge, as well as medical considerations.
Healthcare is never only about medicine.