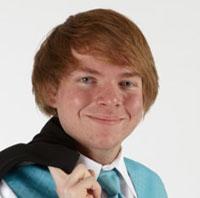 Thomas is thankful he has a future. He wasn’t so sure when in March 2011 he was told as a high school freshman that “he wouldn’t be playing paintball for a while.” Thomas was diagnosed with MDS that quickly progressed into acute myeloid leukemia. His family was told that his only chance for survival was a bone marrow transplant. As an only child, the doctors had to find an unrelated match and they were fortunate to find a 24-year-old female from Minnesota who saved Thomas’s life. Thomas and his family hope to meet her some day, but for now communicate through Facebook. The transplant occurred in June 2011. Thomas had to miss a year of school and had debilitating secondary issues post-transplant including two knee surgeries.

Now it has been three years since his transplant and Thomas is pain free. The Plano, Texas native was an excellent student in high school achieving a 3.94 G.P.A. despite his physical challenges. He also played bassoon for his high school marching band. Thomas says “he just did what had to be done knowing there would be a time in his life without monthly doctor appointments and so many medications.” In the fall, the first-time Debono scholar will attend the University of Texas-Dallas where he will pursue a degree in chemical engineering. Before his disease he says he would not have considered the medical field, but now “it is the only place he can see himself in the future.” He believes that cancer can be as easily treated “as the flu and he wants to be a part of that” contributing to medical research and drug development. Because of his post-transplant issues, the 17-year-old is particularly interested in treatments that will alleviate the side effects of chemotherapy and secondary issues related to toxicity of treatment.

In His Own Words
2014 - Waiting for test results and for my body to recover taught me patience on a new level above your everyday waiting in line or being stuck in traffic. I learned perseverance and diligence, and to keep fighting and working for something, whether it be just a school paper or your life. The three semesters of being homebound for school and having to essentially teach myself helped me to develop self-discipline. The endless streams of messages, prayers and donations from random people showed me there are good people, and they care, and it doesn’t hurt to be one of them. It made me realize that everyone has their own adversities and that those struggles manifest themselves in different ways; mine was a bone marrow failure disease and cancer.

It taught me that faith and prayer are a powerful thing on a mental and spiritual level and help to keep your mind at ease and your hopes high. It taught me not to take anything for granted in life. And lastly, I believe the most powerful lesson is how to make the best out of a situation - how to find positives in all I do. I am about to graduate from high school and I have now decided which college I will attend. I always knew I would be here one day and never doubted that God had a bigger plan for me and I would survive to live that plan. I do believe that my attitude was a big part of me winning my battle. Now my goal is to give back to the community and help others through a difficult situation, just as so many have helped me and my family.

2015 - Patience was by far one of the most important skills that helped me get through my journey, whether it was waiting for test results, waiting for my body to recover, or even waiting for a chance to leave the hospital. Perseverance and diligence, along with will power, were also crucial to me and helped by enabling me to push through and fight my disease. Going in, my faith was also a characteristic that helped me overcome my disease. It was able to help keep me calm and accepting of everything that was happening. The traits and lessons I developed and learned from my journey are probably what sets me apart from others the most. The experiences have helped me develop as a person and have given me an understanding of life different from most people my age.