My Son, the Athlete and Survivor 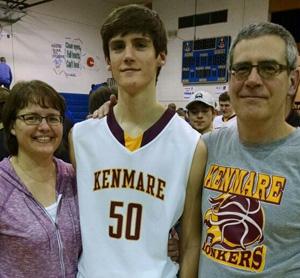 I am the mother of 4 boys, now ages 13, 14, 18, and 20, and we live in North Dakota. We took our third son Samuel to the doctor just before Christmas of 2008 when he was 7, and it was about a month and many tests later that he was finally diagnosed with severe aplastic anemia (SAA). The whole family was tested at the Mayo clinic for a bone marrow match, but none of us were a match.

Sam then received immunosuppressive therapy and he responded quickly and quite well to cyclosporine. But once he was weaned off that drug, his platelets began a slow descent to the point where, about a year later, Mayo wanted to prep him for a bone marrow transplant.

That was when our health insurance company said they would pay for a second opinion. We took Sam to the University of Minnesota Children's Hospital. Sam's platelets quit dropping when he was in the mid 20,000's range, and at that point the doctor felt he was not quite ready for a transplant. Since that time, his platelets gradually came up to the mid-50 and 60 thousand range, and that is where they have hovered in recent years.

Sam had not been on any medications and not needed any transfusions since the end of 2009. However, this past summer his platelets dropped to 26,000. It's been several years since we have been back to University of Minnesota, and we are consulting with a pediatric hematologist in Fargo, North Dakota for monitoring. With Sam's aplastic anemia, it has always primarily affected only his platelets, with other blood counts running only slightly low or low normal.

When his platelets dropped to the 20's, they ran more tests and did more marrow biopsies. The cellularity was spotty at 10-40% but nothing else in the bloodwork stood out as being a cause or a concern. As it stands, he's not in a condition that warrants any major treatments. His hematologist is 5 hours from where we live, so a majority of the bloodwork is done locally.

Of all of our boys, Samuel is the athletic one. He loves sports and has always wanted to play football and basketball. Needless to say, his diagnosis and the low platelet counts have left him sitting on the bench doing stats or assistant coaching most years. Last year, as an 8th grader, his doctor did give him permission to play basketball, which he thoroughly enjoyed. During the season, his body was usually riddled with bruises, and I could see he didn't have near the energy the other kids on the team had. Sam is so driven and motivated that I'm afraid he doesn't realize how fatigued he is. This is how he's probably felt for half of his life, so it seems normal to him.

As a 6'4" freshman in high school, Sam once again participated in basketball, where he worked hard and earned a spot on the varsity team. This team was one of only eight Class B boys’ basketball teams in the state to make it to the State Basketball Tournament! In spite of the risks of being on the court, being able to be part of an awesome season has been more medicinal than any off-label injection, and has brought so much joy!

In September, 2016, Sam's blood counts started to drop further with his platelets at critical levels. His hemoglobin and white counts followed suit. He has been getting transfusions of platelets and/or red blood cells every week since the first part of October. Sam was seen by his transplantation doctor at the University of Minnesota and we are currently waiting for a marrow donor to be selected (there are 6 potential 8 of 8 matches for him!). We are hoping to get the transplant going by the first or second week of December. Sam is disappointed that he will miss the entire basketball season this year, but is so anxious and determined to get the transplant done. We are all expecting a GREAT outcome!