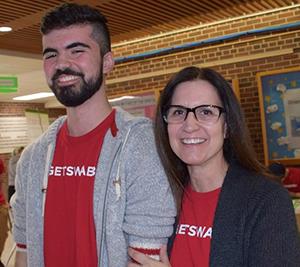 My son Jamie was a very sick child. He was in full-time daycare at the age of 12 months, so he caught every cold and infection imaginable. He’d be on one antibiotic and then need another due to a secondary infection. He had mono, severe flus and ear, throat and other infections.

When he was 10, we thought he had heart problems because he became winded very easily. We took him to the doctor who referred us to a cardiologist. Jamie was diagnosed as anemic and put on iron pills. He seemed to recover but was never able to overexert himself.

He continued to get sick constantly and was often on antibiotics. Mostly it was throat infections and fever. When he was 14, he began to have pain in his joints. He also complained about his eyesight and bad headaches.

He was already very pale but when his color became yellowish, I took him to the emergency room. I knew something was terribly wrong. That night the local hospital flew Jamie to McMaster Children's Hospital in Hamilton, Ontario in a helicopter. I was told he had leukemia and needed specialized care.

Five days later, after a bone marrow biopsy, Jamie was diagnosed with severe aplastic anemia. His counts were extremely low – his hemoglobin was 31, platelets were 3 and his white cell count was 0. The doctors were amazed he was still alive.

My sister was with me and when we heard "anemia", I admit we breathed a sigh of relief, but we also had no clue what the diagnosis meant. We were in shock when we realized just how incredibly rare the disease was.

My daughter was immediately tested to see if she could be a bone marrow match, but she wasn’t, so my son had to undergo immediate treatment with antithymocyte globulin (ATG). At this point he had several platelet transfusions, as well as some red blood cell transfusions.

Jamie had ATG treatment in April, 2014 and stayed on a full dose of cyclosporine for 7 months, at which point he started to taper off this drug. This process took 6 months, so his cyclosporine treatment lasted 13 months.

Within a few months, the transfusions were halted! His platelets were very low but manageable. His counts remained stable week after week. Today, Jamie’s platelets are still low, hovering in the 70s, but his red and white cell counts are great.

Eltrombopag (Promacta®) was not available to us when Jamie had his treatment. I think it would have helped immensely to raise these levels. His doctors say he had a partial response to the ATG treatment and we are holding on to hope that he remains stable and free of transfusions. In the meantime, he is an active 16-year-old normal teenager, except for the fact that he has blood work every three weeks to keep an eye on his platelets. We hope he will soon move to monthly testing.

I spent 8 months at home taking care of my son. I am a single mother living in a new town so we did not have much support. I found guidance with an online community through Facebook. I have met several other parents I could talk to, every day, all day! I even became friends with another mom whose daughter has aplastic anemia and is being treated at the same hospital as my son. This community saved my sanity and also provided important information I could bring back to our doctors. I thought this was so valuable.

Jamie is a very happy kid now. He has been active in his treatment and is very knowledgeable about aplastic anemia and everything it involves. He just wants to move forward, and prays (like I do) that he will never need a transplant. He has been amazing through all of this, and I get my strength through him.

In the middle of 2016, Jamie had his third bone marrow biopsy and the results looked good. His platelets have dropped somewhat, but his team did not suspect this was indicative of any type of relapse. His PNH clone remained tiny and non- therapeutic as well. Jamie's counts were a bit lower than normal with platelets and white blood cells, but overall he is still stable.

Jamie also signed a consent form with Toronto’s Hospital for Sick Children to have his bone marrow and blood researched for possible genetic connections to aplastic anemia. They will be diving into his DNA extensively, also looking at any possible health issues he may face in the future due to aplastic anemia /PNH and resulting low blood counts. Anything he can do to contribute to a possible cure -- he is fully committed, although it may take a while before anything begins. I am so proud of Jamie for signing up to participate!

However, in August, Jamie relapsed quite rapidly after his most recent biopsy. At first, his doctor thought the low platelets were a result of the biopsy but it really was the beginning of a relapse. His counts continued to drop, especially platelets. By the end of August, he repeated the ATG treatment, this time with rabbit ATG. This occurred on September 10 at McMaster Hospital and the treatment was quite easy for him.

But a week later he developed serum sickness, which was very painful and draining. He missed 9 days of school, and being in 12th grade he was more upset about this than the relapse.

Jamie's follow-up biopsy was set for December 8 but has been postponed until March because Jamie is responding exceptionally well to the ATG treatment he had in September. He arrived at the three month mark, where most start to respond and I'm so happy that he is doing so well. His levels are now not quite in the normal range but they are trending up!  So we are just doing bloodwork bi-weekly now and soon we will begin the transition to adult care.

We are optimistic because of these recent developments but are ready to face anything coming our way. I am praying he recovers fully this time so we can move forward with our lives.

Very recently Jamie and the senior class at Centennial CVI in Guelph held a "getswabbed" event and it was incredibly successful. We have 169 new possible donors to add to the registry! Jamie is strong and focused on his future. He will be applying to universities soon, his main choice being Waterloo for Computer Science.