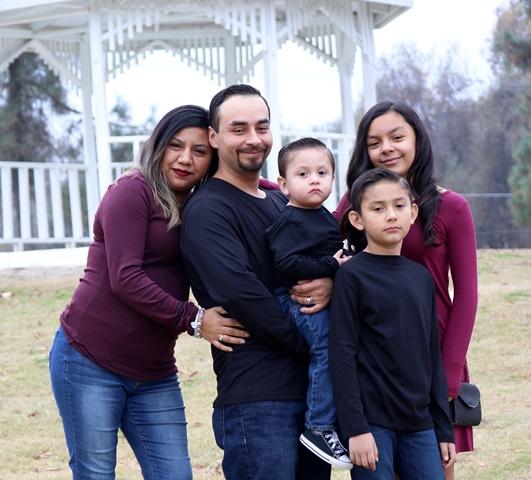 In September, I started having different problems. I was not feeling well. I kept feeling my heart beating so hard I could not get up to walk a few steps to my kitchen or to my bathroom.  I would get short of breath. I could hear my heart pounding in my ears! I felt so weak I figured there must be something wrong with my heart, so I made an appointment with my cardiologist.  He said I had signs of congestive heart failure, but he did nothing for me. He said people can live that way for a long time, which disappointed me.

On September 11th, my symptoms were so bad! I would get up and just fall right back down, short of breath, heart pounding, head pounding---it was just awful. I went in to see the cardiologist again that day as an emergency. He found my oxygen level was in the 80s with my heart rate in the 150s. He sent me to emergency and said he was sorry, but I was going into congestive heart failure.  I cried!  I said, “I have kids, I’m scared!” so he apologized. I went to the emergency department where they gave me fluids and oxygen.

Finally, they reached my doctor who said I was having a reaction to the dapsone medication. She then ordered them to give me Methylene blue injection. They gave it to me slowly, and my oxygen slowly started going up and my heart rate started going down. I was admitted for a couple of days for observation.

After I returned home, I felt so much better. I resumed my regular routine of labs and transfusions. I had appointments with my doctor at UCSF where he would just check on me to see how things were going. He also told me it didn't seem that horse ATG was responding. I asked to wait a little longer. I told him I follow a group on Facebook and people said they seen a response after 6 months so he agreed but I should consider transplant because it's the only cure.

After months of still no response, I had another follow up appointment. He said they had an 8/10 unrelated donor, but I said, “I'm scared! I don't want to stay away from my children for four months. I can't afford housing in San Francisco plus my regular housing for my home. Also, I don't have 2 caregivers which makes it too hard!”

I told him I read about rabbit ATG, that people who did not respond to horse ATG had a better response to the r-ATG.  He said ok we can try it, and he would let my local hematologist know. He was willing to try this treatment for only two months to see if I responded. Due to insurance issues, it took a long while to get the treatment approved, but once it was approved we fell into this crazy COVID pandemic! I had to put it on hold, so I had to continue with appointments and transfusions. My doctor said, “Well, we will see how it looks in about a month.”  After another month, the pandemic was still around. She said it doesn't look like this is going away, so we can just do treatment. Well, because we waited so long to do the treatment, I had to deal with insurance again.

Finally, it was approved, and I was admitted on June 1st, 2020. We started treatment that night. I felt alone and scared because no family was allowed in the hospital. I thought to myself, “My husband or my dad isn't gonna be here if I have a reaction like I did with the horse ATG.” I fell asleep during treatment and I woke up shivering so hard! I felt so cold and my feet were burning up! My body was hurting so bad from the shivering they stopped while gave me some Benadryl and another medication because they said I was reacting to the treatment. Once I was relaxed, they resumed.

The next day I felt ok, just sore and tired. I felt like day two was going to be a breeze, but when I got up to go to the bathroom something happened. I got short of breath, my body felt heavy, hot, and clammy, and my heart was pounding. I pushed the call light and asked for help.

I fell to the floor, barely able to move my fingers. I couldn't talk and I didn't have the strength to open my eyes, rollover, or even respond to what nurses were telling me. When they walked in, I heard them saying my name telling me to roll over telling me to open my eyes, but I just couldn't. I could hear the nurse call for back up! I could feel her rubbing my chest saying my name---my eyes would just roll. I heard another nurse ask if she should call code. They said no, not yet. With the help of all the nurses, they got me up and carried me back to bed. They put fans and cold towels on me while taking blood for more labs.

When I was able to talk, the first thing I said was, “Don't let me die! I have children.”  I was running a fever which they said was a reaction from the treatment accompanied by serum sickness. I had no treatments that night. My blood and platelets were low, but they would not transfuse me because of the fever. I finally broke the fever on the 3rd day, so they gave me everything I needed, and I was able to continue treatment.

It all went very well! I was able to go home on June 7th, 2020. I was so happy to be back with my husband and children my baby--- he's three years old and had a hard time being away from me. When I came home, he felt so good that we both fell asleep together. It was such a good feeling. The next day I went for Labs, then came home and just slept from exhaustion.  My platelets were low, so I was called to go in on Tuesday for a transfusion. I woke up that Tuesday morning feeling awful! I tried to get up to go to the bathroom, but I was weak and having chills. I felt as if I was having another episode like in the hospital when I passed out. I just couldn't get the strength to get ready for my appointment.

Luckily, I have such a great husband that dressed me head to toe to get me ready. When it was time to go as he helped me walk down our hall. I needed to ask for help because I couldn't breathe!  I was hot, clammy, and ready to pass out. Then, he called 911.

Back at the hospital, I had low hemoglobin, low platelets, low blood pressure, and a high heart rate. Again, it was an allergic reaction to treatment. I was admitted the next day. After being admitted, I was in so much pain I could not move my legs or arms, they felt so heavy. The doctors didn't seem concerned. They said my CT was fine as were my labs, but I knew something was not right. They then moved me to Intensive Care where they were able to stabilize my heart rate and blood pressure. They said the treatment and meds caused muscle weakness and that's why I was unable to move. I got my movement back after two days. Even though it still hurt to move I could and did move then. After a week’s stay, I was released.

Now I'm home. waiting for a response from treatment. Let's hope and pray it does ....my story will continue!