A Remarkable Response in a Clinical Trial 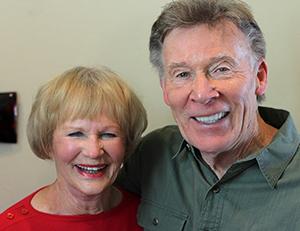 In February 2012, I was diagnosed with myelodysplastic syndrome (MDS), a disease that has no cure except for a stem cell transplant. Because I was in my mid-70s, a bone marrow transplant wasn’t the best option.

At the time of the diagnosis, my spouse, Jim, and I had been retired for eight years as professors from the University of Arizona, and we were enjoying busy lives performing at festivals, singing and accompanying ourselves on our digital accordions. We had planned a cruise in less than a month and my oncologist encouraged us to take it, saying that once I got into treatment our lives would be significantly different. However, we decided to cancel the cruise and begin treatment immediately.

I had a port catheter implanted and the treatment began. I was housebound for about six months because of likely infection due to low white blood cell counts. My treatment at the beginning was decitabine (Dacogen®) for 5 days every 28 days. Then after seven months, I had a bone marrow biopsy and the oncologist said the treatment had been so effective that there was no evidence of disease. I was in remission.

I was able to resume a normal life for the next seven months. However, much of my research told me otherwise. MDS was just smoldering, and not gone. I had regular port draws and as I feared might happen, my counts began dropping again.

During this time, we decided to consult with some of the top MDS specialists in the nation. We went to Moffitt Cancer Center in Tampa and a few months later consulted with a well-known transplant specialist at the Seattle Cancer Care Alliance. Finally, we visited the Cleveland Clinic for a consultation.  All three experts said that the original treatment plan was effective and I needed to get back on it. This time they suggested azacitadine (Vidaza®) for 7 days every 28 days.

After two years of this treatment, my blood counts were still steadily moving lower. They cut the dose in half and then stopped treatment altogether, telling me it was no longer effective. It had failed. After another bone marrow biopsy, a genetic mutation (the IDH1 gene) was identified. Then, the shocking statement was given me: "You have five to seven months to live." I wasn't willing to accept this prognosis so I sought a second opinion and got a similar grim prognosis. I had only a few months to live unless I found a clinical trial and soon. Neither of the two oncologists offered to help me find a clinical trial.

So, I got to work. For several weeks, I searched clinicaltrials.gov without much success. Each day I was becoming more and more desperate. I contacted AAMDSIF and told their patient educator, Leigh Clark, what my issues were and my specific genetic mutation. She immediately wrote me back:  "Hang on and give me 24 hours". In less than that time, she sent me five clinical trials. It was the third one that described a Phase II clinical trial at MD Anderson Cancer Center, using an experimental drug called AG120. AG120 blocks the mutant IDH1 protein that causes my disease. The two pills each day allows the white cells to mature properly into normal cells. The bone marrow is no longer crowded out with leukemic cells, and the normal red cells and platelets return too.

A few days after I applied to become a new patient at MD Anderson, Dr. Courtney DiNardo asked me to fly from my home in Tucson for testing. Between MD Anderson’s huge campus and the battery of medical tests, our first visit was overwhelming, but they gave me hope that this clinical trial just might be the right one for me.

Only 24 hours after my spouse and I returned to Tucson, Dr. DiNardo called and said she had reviewed my test results and asked us to return right away. So, we canceled our holiday plans, packed our belongings and arrived in Houston on Dec. 12, 2015.

At MD Anderson, we learned that my MDS had progressed to acute myeloid leukemia (AML). This was shocking, but at the same time, we felt we were right where we needed to be. People come to MD Anderson from all over the world, and I was grateful to be there with so many brilliant physicians treating so many other AML patients in the leukemia department.

I was accepted into the trial and on December 23, 2015, I took my first dosage of AG120. At that moment I took a selfie with the two techs because I had this strong sense that this was going to be my game changer. Then came endless EKGs, blood tests and bone marrow biopsies to check my blood cell counts. Two weeks into the clinical trial, my white cell count was higher than it had been in two years. My spouse and I were amazed and elated.

When I’d arrived at MD Anderson, my blast count was at 30%, extremely high and well into to the AML range, which begins around 20%. At the end of the first 28-day cycle, it was just 2%, which is normal. It was the first part of this miraculous experience.

My blood count values --  red blood cells, white blood cells and platelets -- reached near normal range within six months and fully normal in a year. Now I enjoy being in complete remission, but I will continue to take AG120 indefinitely. Whenever Dr. DiNardo’s team asks about side effects, I cannot name any (except I sing better and  play more exciting accordion music) have more energy and am more grateful every day.  Literally, AG120 has saved my life.

I’ll always remember what Dr. DiNardo said the day before I was accepted into the clinical trial: “You are in the right place at the right time with the right mutation.”  And, she was absolutely right. The ongoing research that Dr. DiNardo is doing as part of MD Anderson’s MDS/AML Moonshot is helping to ensure other patients will have this same opportunity.

Because I am in remission (as long as I stay on AG120), they have transferred me to the Mayo Clinic in Phoenix and I can easily drive from Tucson, (my winter home) every 28 days to receive my next cycle of AG120 pills. I still fly back to Houston every three or four months to stay in touch.  But when the FDA approves AG120, I’ll be able to fill my prescription at my local pharmacy. Until then, returning to Phoenix or Houston is a small price to pay for getting my life back.

When you are diagnosed with a disease, it is important to become your own advocate because no one else is going to do it for you. However, I had excellent support from AAMDSIF and Dr.DiNardo, and my spouse, Jim, has been with me at every step. When Dr. DiNardo said we needed to travel to Houston for treatment for two or three months, I just couldn't wrap my mind around how we could do it. Jim immediately said: "Of course we will come, we have a motorcoach.  We will be there in a few days". And, we were. I could never have gotten through this without his constant positive encouragement. He has been my rock.

Finally, our faith, and the prayers of so many family and friends have provided and continue to provide consolation, confidence and cheer. I am willing to tell my story to anyone who will listen. My story is a story about a miracle.