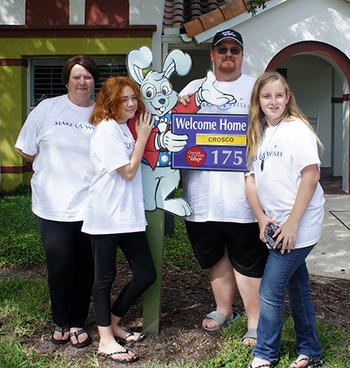 Brianna had always been a healthy young girl. We initially noticed some rather minor things with her but did not know at first how serious they were. She had low-grade fevers that went away during the day, but came back in the evening morning and there was her first-ever nosebleed. She missed school for a few days, so we saw her doctor. There is also a clotting disorder that run in our family – so I also wanted her to be checked for this because she had reached age where this should happen.

So the usual blood tests were run and through that the problem was discovered. The next day the office called back, saying we needed to go to the emergency room right away. They wanted confirming blood tests run, and when we arrived there was a medical team waiting. We learned that depending on what results came back, she might have to go right Children’s Hospital in Washington, DC – and this was what happened. There was more blood work when we arrived, but still no clue what the problem was – but she was immediately receiving transfusions!

The hematologist told us a bone marrow biopsy was needed and there was a possibility of leukemia as the worst-case event. Our hearts sank. After the biopsy, came her diagnosis of severe aplastic anemia.

Instead of immediately looking for a matched donor for a transplant, Brianna was immediately put on horse ATG and cyclosporine. We spent two weeks at Children’s Hospital in DC. At three months, there was very little response, but we knew this was quite possible. Our full time doctor and nurse from Childrens’ Hospital were now in the hospital’s satellite office in Rockville, MD. For the first several months, we had to make trips to the area two or even three times a week for blood draws, transfusions, and overall evaluation.

At this point, we met with a transplant team but that option scared us and we weren’t quite ready to go with a matched unrelated donor. One was found, but it was a much older person at the upper limit of what is allowed for donors. She finally responded well to ATG at about six months, plus we had heard about the new option with treatment with eltrombopag.

The only reason she could not join the eltrombopag clinical trials was that her cyclosporine levels were not in the range required for this to happen.

But her blood counts have improved and she’s been transfusion-free for nearly a year. With lower white blood cell counts there are still challenges with potential infections, she still becomes fatigued. There has been progress and some setbacks but we are optimistic in general, especially because of the excellent treatment she has received.

Still, Brianna has been through a lot and one nice thing that happened for her was a trip for her to Disneyworld, provided by the Make-a-Wish Foundation. At first, I resisted applying for this, knowing it’s very often for kids with life-threating or even terminal conditions, but applied and was pleased to have our request granted. We had a great 5-day visit, staying at the Give Kids the World Village and one of her friends came along!