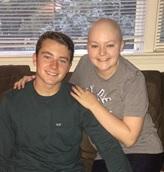 In May 2017, life was good and I was “living the dream”. I had been working full time for about a year after graduating from the University of Kentucky. I was living in Columbus, Ohio, working for an organization that supports children with childhood cancer and catastrophic disease. Everything was on track for my future.

I started to feel sick. At first it seemed like flu-like symptoms of fatigue, racing heartbeat, lack of energy and some bruising that just wouldn’t go away.

I drove home to Arlington, Virginia to see my primary care physician. I felt so bad, that my dad and I decided to visit our local hospital for emergency medical attention.

Severely low hemoglobin counts were discovered. Hospital staff wondered how I was still walking and talking. I was admitted to the ICU where I immediately started receiving my first blood transfusion. After considerable conversations about travel, symptoms and possible things that that I could have been exposed to, the medical staff concluded I needed a bone marrow biopsy to determine if leukemia was a possibility.

At this point a new doctor got involved and mentioned I might have a bone marrow failure disorder, which my family and I had never heard of.

I was then officially diagnosed with severe aplastic anemia. The hematologist/oncologist said that I needed immediate treatment, likely at a tertiary referral center. Two days later I met with a Dr. Amy DeZern a hematologist at the Sidney Kimmel Comprehensive Cancer Center at Johns Hopkins in Baltimore, Maryland.

My best chance for the long-term survival was a stem cell transplant. In order to begin treatment, I needed to find a transplant donor. We tested my 19-year-old brother and 14-year-old sister to see if either were a match to me. My sister was not a match, but George, my younger brother, was a haploidentical (half-match) to me.

I learned that most transplant centers require a 100% percent match; however, at the time my Dr. DeZern was running a clinical trial at Johns Hopkins for patients like me who only had a half-match

Johns Hopkins treats their BMT patients on an outpatient basis, as research has shown that people respond better to treatment when they have a sense of normalcy. My family and I temporarily lived in a small apartment in Baltimore, close to Johns Hopkins.

I visited IPOP/HIPOP every day, which is an ambulatory clinic for BMT patients. I received antibiotics, chemotherapy, and radiation therapy here, spending a total of 8-12 hours a day (minimum) in the clinic.  There were a few minor complications like fevers that required brief inpatient stays but as I engrafted, and my blood counts improved, I went from daily visits to weekly, bi-weekly to monthly, before being declared healthy enough to stop visiting so frequently.

Nine months later, I moved back to Ohio to pick up the life that was placed on hold nearly a year before. One year after my initial diagnosis, I remain fully engrafted and my blood counts have returned to normal.

As I look back, I have come such a long way. I appreciate advances in research and treatment, but I am also very grateful for the power and strength of community. I expected my friends and family to help me but I didn’t expect the outpouring of support from my hometown, my work colleagues, and old friends I had lost touch with.

I found AAMDSIF early on while I was looking for information about Severe Aplastic Anemia and trying to understand the diagnosis and disease. AAMDSIF’s resources helped me and I immediately knew I wanted to do something in turn to help others in my situation.

Now that I am healthy again, I want to raise awareness for bone marrow failure diseases and the hope that comes with surviving. To start, I want to share my story so that others know they aren’t alone. I will continue to support the AAMDSIF and volunteer to help others in need. Together with our families and networks, we represent a powerful voice.

Please help others like me by continuing your support of AAMDSIF. We are all part of each other’s community and support network – raising awareness is an important and meaningful way to fight bone marrow failure disease.

“People often ask me, “How did you do it?” When given a challenge, never underestimate your power to overcome.  I wouldn’t trade this experience for anything. What I thought was a nightmare turned into blessing. Bone marrow failure has taught me to celebrate small milestones, show kindness, and to appreciate all life has to offer.”