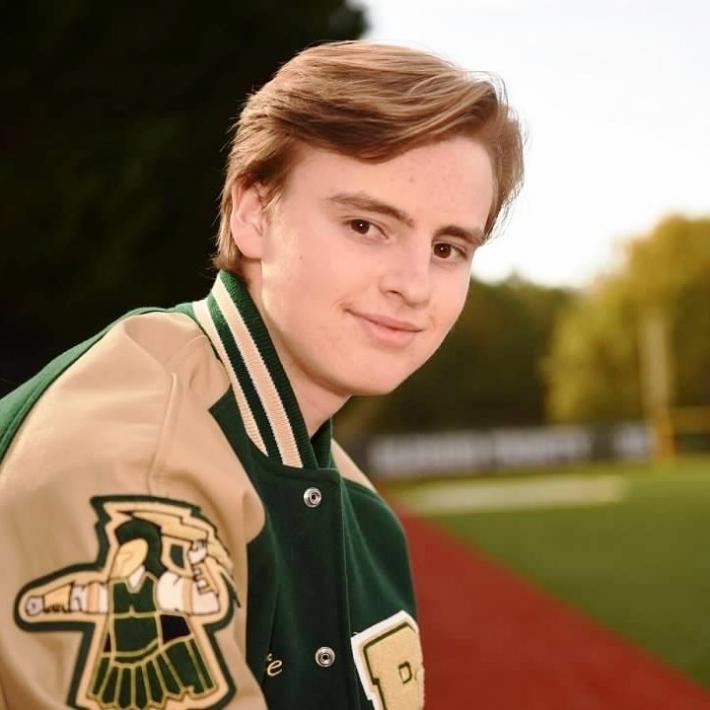 Here is Nick's story, as told by his mom, Pamela Karavite

At 13, Nick was an active teenaged boy.  He played on a summer basketball team, and two baseball teams.  I had seen bruises on his arms and legs, but they were typical for a teen boy that plays hard.  Nick had just pitched his first no-hitter, and lethargically played in a couple of basketball games two days later.  It was odd that he seemed so tired, but it was summer, the gym had no air-conditioning, and all the boys seemed tired.  We were headed out of town for the weekend, and I thought a little rest would be good for all of us.  Sitting outside with Nick, I noticed red dots had surfaced all over him (which we later learned were petechiae… tiny, round blood drops under the skin).  We immediately packed things up to head home so I could get him into the pediatrician.

On Monday, our pediatrician looked Nick over, and suggested we do blood work.  With the results in hand, he reentered the room and with a calm tone I’m certain was meant to not alarm us, he sent us directly to the hospital.  “Do not go home first, head right to the 5th floor and check in.”  As we stepped out of the elevator, I immediately spotted the medical staff waiting for us.  As the doctor introduced herself, I looked down at her name tag and read the words, “Hematology and Oncology.”  I was terrified.

They ushered us to a room set up for Nick, drew more blood, and started an IV.  My husband was out of town, my other children were with my mom, and Nick and I settled in for the night.  Within hours he was pale as a ghost!  The doctor explained that Nick’s blood counts were all low, and his platelets were 3,600 at the pediatrician’s office, and they are now at 1,600 (normal range:  150,000 – 350,000).  She informed me that they would be doing a bone marrow biopsy first thing in the morning, and she would have more insight after that.  I asked what she was looking for, and she responded, “Either Leukemia or Aplastic Anemia.”

Wednesday morning the doctor came to the doorway of Nick’s room and gestured for me to come out into the hallway.  My heart sank as I knew in that moment, it was bad.  She explained to me that Nick had Severe Aplastic Anemia.  At first, I was relieved that it wasn’t Leukemia, having resisted the urge to go online, I had no idea what Aplastic Anemia was.  Sensing my relief, she explained to me that SAA is actually harder to cure.  With the wind knocked out of me, my feet almost failing me, I managed to ask, “How do we fix it?!?!”

“Nick’s chance of survival is 50% but will go up to 80% if we find a donor for a bone marrow transplant.”  We never told Nick his odds, just what he needed to do to get well.  Given that Aplastic Anemia is so rare, we were blessed that Nick’s diagnosing doctor had seen this before and diagnosed him quickly.  We were sent to University of Michigan, along with Nick’s three siblings (Christian 12, Brandon 8, and Mandy 5), to meet with a doctor that could potentially help Nick and test his siblings for a match.  This amazing doctor spent five hours with us that day and when Nick left the room, he dealt us the ultimate blow. “Even with a transplant, I can’t tell you he still won’t die,” he said.  It sounds harsh, but it wasn’t.  He was filled with empathy for us, cried with us, and as he hugged us, he uttered an explanation for the grenade he tossed at us, “I just need you to know how bad this is.”

In the next few weeks, Nick’s health was threatened with multiple infections and dropping blood counts.  We finally got the word that Nick’s little sister Mandy was a ten out of ten match for him!!  My husband fell to his knees in tears when we heard!

We checked into U of M, and Nick began the week-long aggressive chemo treatment.  With one day off for rest, the following day, Mandy did her part in the morning.  Due to her age, she was put under.  The trick was to get enough marrow from Mandy to help Nick, while not taking too much to harm her.  They wheeled her into Nick’s room to watch herself “give him life.”  It was a beautiful moment.

Nick’s recovery was a long road for him due to steroids given to encourage Mandy’s cells to take over.  He gained tons of weight, but eventually worked it off and returned to his first love… baseball.  His first year back to school was his freshman year of high school.  With a 4.2 GPA, he was awarded the Freshman Student of the Year Award.  He made the baseball team; and was award Pitcher of the Year in his sophomore year.  As a senior, he was awarded the St. Sebastian Award given in recognition for excellence in faith, character, leadership, academics, and athletic ability.  The comeback is always greater than the setback!!

Mandy’s cells have pretty much taken over with the exception of the T cells where they continue to battle back and forth.  We finally stopped doing the chimerism test because it was making us all crazy.  He looks good and he feels good.  As his doctor said, “In the words of The Rolling Stones, you can’t always get what you want, but you get what you need.”  Nick is now a college freshman, premed, and on the college baseball team.  Clearly, Mandy gave him what he needed.  We are blessed and wish everyone on their journey so many blessings!!