BMT Meant 'It Could Finally Be Over ' 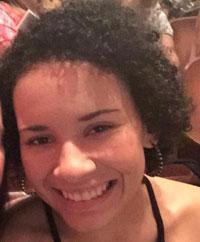 At the last race of my high school cross country career, I stood on the starting line with one hundred other girls and repeated only one thought - “just finish”. I didn’t think about winning. I didn’t think about beating any records or trying to beat anyone, for that matter. I just wanted to finish. I wanted to look back and know that I did this one thing for me. I wanted to know that I did something that scared me, something that no one expected me to do, and something that I wasn’t even sure I could do. I wanted to power through this race and finish. So when the start gun rang out through the air, I took off running.

I sprinted the first stretch of the 5k race and my legs began to get the familiar ache I had grown accustomed to the last few weeks. The ache that said my legs weren’t getting any oxygen. I knew this was because my hematocrit(the volume percentage of red blood cells in my body), had gone down recently and it had been almost two weeks since my last blood transfusion. It was at about 19%, or half the usual amount for girls my age. I tried my best to ignore the ache and run my hardest, but I was slowly falling to the back of the pack. My lungs were begging for air and I realized at the end of the first mile that I was dead last.

It took me 37 minutes to finish that race - the longest and most difficult 37 minutes of my life. It happened only weeks after my hematologist decided that after eight years of living through aplastic anemia, it was finally time for a bone marrow transplant. The disease had progressed to the point that I was transfusion dependent and it was no longer safe for me to continue living with the condition. Though I knew the race would be exceedingly difficult because of my low blood counts, I wanted to compete because it was likely this would be the last sports competition I would participate in for my high school. It turned out I was right. Two months later, my family and I got word that a donor had been found and that my bone marrow transplant and recovery would take place during the last six months of my senior year.

A Struggle with Two Diseases

In 2006, at the age of 10, I was diagnosed with severe aplastic anemia. At the time, I didn’t really understand what that meant. I just knew that I didn’t get to go to school. Prior to my diagnosis, I suspected that something was wrong because I could barely run a lap around the soccer field without gasping for breath. People also said I looked pale and I bruised easily. When I found out I had a disease and it wasn’t my fault that I was unable to run, I was relieved. But the relief was short-lived. Since none of my immediate family members were a bone marrow match, the doctors put me on a regiment of ATG (anti-thymocyte globulin) and cyclosporine.

The year after my diagnosis was one of the hardest in my life. I had appointments once or twice a week to check blood counts and I wasn’t allowed to go to school for the rest of the year. Cyclosporine had some unpleasant side effects that were hard to cope with, but by the beginning of sixth grade I was finally able to return to school. I was overjoyed that my blood counts were steadily rising and the treatment was working. Even at the age of 11, I understood that I had been given a chance to really live my life. In November 2007, exactly one year after my diagnosis, my family and I took a trip to Disney World in Florida through the Make-A-Wish Foundation. Following a long, hard, year of treatment, the trip was exactly what we needed.  When I returned to school I made the decision to enjoy every single day and live life to the fullest. During middle school and most of high school, I worked hard in the classroom and competed in every sports season available.

Though my treatments had put me in remission, my blood counts continued to decline throughout high school. My aplastic anemia was like a dark shadow that followed me around. I kept participating in sports, even though I wasn’t able to compete at the same level anymore. I also maintained a 3.9 GPA, but had trouble staying awake in some of my classes. In December 2012, I made varsity basketball and school was going great.  I noticed that running and walking up stairs was becoming more difficult. During a routine monthly checkup, I was told that my platelets were so low, I needed a transfusion. My doctor told me that for now I had to give up all contact sports. No basketball. No volleyball.. The rest of basketball season was difficult. I sat on the bench every game, attended every practice, hoping and praying that my blood counts would rise and I could play again. But they never did.

In October 2013, the beginning of my senior year, my red blood cell counts dropped dramatically. I had to get my first red blood cell transfusion in seven years. Along with the transfusions, the doctors found that I had also developed paroxysmal nocturnal hemoglobinuria (PNH). I had become transfusion dependent and the doctors  decided that it was finally time for a bone marrow transplant. Upon hearing this, I remember the despair I felt. I was heartbroken that I wouldn’t be able to finish senior year with my friends. After overcoming the disappointment, I realized what a blessing the transplant would be. I was getting another chance to live the rest of my life free of aplastic anemia. It could finally be over.

In January 2014, I received a stem cell transplant from an unrelated donor. My transplant ended up going as well as it possibly could have gone. After four months of having to live in and near Seattle Children’s Hospital, I was finally able to go home. My recovery was still far from over, but I had made it through the worst of it. My body continued to get stronger every day and I began to appreciate my post-transplant life. I could walk up the stairs without getting light-headed; I could be outside without feeling abnormally cold; and I could exercise without feeling like I might pass out. It felt like my body had been freed from a prison it didn’t know it was in.

Oddly enough, though cross country was arguably my worst sport in high school, it was that last race that I kept remembering during my transplant. Every time I was in pain, or I felt like I would never get out of the hospital, I thought about that race. I thought about how it had taken every ounce of patience, courage, and confidence I possessed to make it through that raceand how it was those same character traits that had helped me live through my disease for the last eight years.

With my new found freedom I became even more determined to go to college in the fall. I was already missing my senior year of high school because my immune system wasn’t strong enough yet. I didn’t want to also miss my freshman year of college. However, my doctors were not as accepting of my decision as I might have hoped. They advise most children and young adults to refrain from returning to school until a year after transplant. My transplant had gone exceptionally well and eventually the doctors agreed I could go to school as long as I took precautions. Those included not staying in the dorms because of the risk of illness, and eating only food that I cooked for myself. I was more than happy to accept those terms as long as it meant I would be at college in September.

I had been accepted into six universities, but I chose to attend Eastern Washington University where I will be entering my sophomore year this fall. It was the most inexpensive university, just four hours away from my hometown of Auburn, Washington and it was only twenty minutes from Sacred Heart Children’s Hospital in Spokane. For me, it was perfect. School had been the thing I missed most during my transplant and I was looking forward to being in a classroom again. Even more than that, I was excited to be in a new place where no one knew me as the sick girl.

During the several years my blood counts were declining, it was scary not knowing what would happen to me. Instead of letting fear affect my decisions, I never let the aplastic anemia and PNH control my life. I played sports even though physically I would never be on the same level as the other girls. I got a full-time summer job even though I knew working forty hours a week would make me exhausted. During my transplant, I excelled in school when no one expected me to. That is why in my last cross country race, though by normal standards I failed miserably, I felt like I had won. I had won because with patience and courage I finished the last race of my high school career without letting the fear of my disease stop me.

During my hospital stays and many clinic visits over the years, I have met countless nurses and doctors. They have all been very professional and knowledgeable and have been honest when they were unsure of the route that needed to be taken. Most importantly, they have always treated me with kindness and respect and shown a genuine interest in how I was coping in life with my disease. Their care and concern over the years has opened my eyes to the many ways people need help and has led to my desire to become a nurse. After working with kids in both youth group and children’s ministry at my church, and spending half of my life around medical clinics and other kids suffering various diseases, I feel prepared to pursue a career in pediatric nursing. I know that I want to be an RN and am considering becoming a physician’s assistant or nurse practitioner. This summer I finished training to become a Certified Nursing Assistant so that I will be able to work with patients and gain experience for nursing school.

After being free of aplastic anemia and PNH for more than a year, I can say that I do not regret anything that I have been through. Had I never gotten the disease I wouldn’t be who I am today. It also showed me what I want to do with the rest of my life and who I want to be. My disease has given me a better understanding of others and made me more appreciative of life. My experiences have taught me that worrying about what I can’t control is useless. The only thing we ever truly have control over is our attitude and that often makes all the difference. For others who are experiencing the challenges I have met, I would say to keep the faith. At one point in my life I thought this journey would never be over, but patience and optimism are the only way to get through.  I can honestly say that going to college and being the healthiest I have been in eight years, I have never been happier!