My Nurses Were an Inspiration 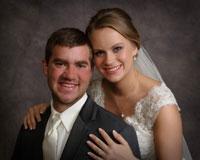 In November 2013, I was 22 years-old and going to school part-time for nursing while working as a Certified Nursing Assistant at an assisted living home. I was almost through my first semester of classes when I got a cold. I didn’t think much of it because my girlfriend, Abby, had been sick a few days before. By the end of the week I wasn’t feeling much better. Little pink dots (petechiae) on my arms and legs started to appear.

Over the next few days, I visited the doctor, went for lab work, visited a  local oncologist, and then traveled to Indianapolis for a bone marrow biopsy. A few days after my biopsy, I was diagnosed with aplastic anemia. Everything had changed so much in such a short amount of time.

At this point, I was still at home and feeling okay, which did not last long. A few days later, I was admitted to the Indiana University Health Hospital in Indianapolis, about three hours away from my home of Ferdinand, Indiana. I was in and out of the hospital for the next two months receiving congoing transfusions and looking at different treatment options. A bone marrow transplant from a sibling was not an option for me, so I was added to the bone marrow registry.

We decided to give ATG (anti-thymocyte globulin) a try. Being far away from home was difficult for me and for those closest to me. I was fortunate that Abby, my girlfriend of five years, was a strong supporter and was there for everything as much as she could be. In December of 2013, we decided to get engaged. We had planned on waiting a little longer and saving money, but that didn’t seem as important now. We had plans to go ring shopping one of the few days I was home. Unfortunately, I ended up in the local hospital before we had a chance. We still wanted to get engaged so she went with her parents and my mom. They texted me pictures of the ring to get my opinion. After we agreed and she brought it back, I proposed to her in my hospital room. It was not your typical engagement story, but a very unique one!

We planned our wedding for more than a year in the future because we did not know what treatment I would need or how long it would take until I would be feeling better. In January of 2014, I finally returned home from the hospital. It felt so much better to be home, but it was still a long, cold winter. I spent my days going to the hospital for lab work and transfusions. In March, I had another biopsy. The doctor did not see much improvement from the ATG treatment so we scheduled a bone marrow transplant from an unrelated donor.

Over spring break, my fiancé and I went on a little getaway. It was nice to have some relaxing time alone, although we were still traveling back and forth to the hospital during the day. The Monday we returned, I went in for my usual lab work and received different results for a change. For the first time since my diagnosis, I did not need a transfusion. My doctors were thrilled and decided to hold off on the transplant to see what would happen. My counts weren’t great, but they held their own. The rest of the month they stayed about the same. The important part was that I wasn’t transfusion dependent.

We noticed a trend over the next several months. My counts started to go up after I went away on vacation at the end of May. My counts made their biggest jumps after exciting or happy things occurred. They have made large jumps since we purchased a house last summer and began working and remodeling to make it ours. It was nice to have this distraction from my disease.

At the beginning of my illness, having my labs drawn twice a week wasn’t enough. By the fall of 2014, my doctors were so pleased that I was only having them drawn once every two months! I was also able to attend school again and work part-time at the YMCA after school program. I am again working at the YMCA this summer in their camp.

I am currently enrolled in the Vincennes University Jasper Campus nursing program. I had been almost a semester into the program when I was diagnosed and had to quit. I was able to rejoin in August of 2014. I am only a part-time student because I already have a bachelor’s degree in biology. After receiving that degree, I decided to take nursing classes.

Being diagnosed with aplastic anemia strengthened my desire to become a nurse. I worked with many nurses and other health care professionals throughout my illness who helped me so much. Not only did they help me in the medical sense, but so many of them cared for me and saw me as more than just a job. I want to do this for others and help them cope with their illnesses. I know it is important that nurses care for a person holistically and not just focus on their illness.

I will be eligible to become a registered nurse in May of 2016. After completion of this program, I hope to obtain a job working at my local hematology/oncology clinic. I spent a lot of time after my diagnosis at this clinic. While working, I plan to pursue my master’s degree in nursing through Ball State University with a goal of becoming a family nurse practitioner.

My counts are now in the low normal range. I am still taking cyclosporine. My doctors said they will gradually take me off when my counts have stopped climbing. I am very fortunate that I do not have side effects from it and my kidney and liver functions are great. People always ask how I feel now. Compared to how I felt before I got sick, I actually feel better! My counts might not be the same but I take much better care of myself and it shows. I eat healthy, drink plenty of water, and make sure I get enough rest. On April 18th of this year, I finally got married to Abby. I plan to continue taking care of myself and hope things continue looking up. I feel great!