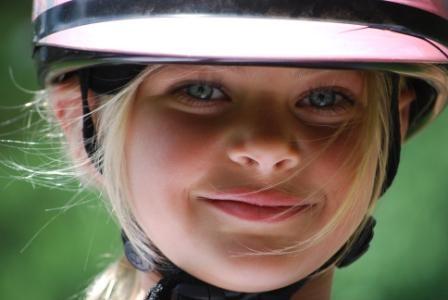 Aplastic anemia is known to most often strike children between ages 6 and 16, and as fate would have it, Liviya’s troubles became evident right on her sixth birthday. Clearly, this had started earlier but we didn’t know about it. The doctors didn’t know what was wrong with her. One possibility was leukemia, but she was later correctly diagnosed with severe aplastic anemia and had the blood counts to support that classification.

Liviya immediately began receiving blood and platelet transfusions, of course. We learned that Liviya’s older brother Axel was not a match for bone marrow transplantation. Because of this, she started immunosuppressive therapy with horse ATG, treated at UNC hospital in Chapel Hill. She responded well. Our doctor said it was the best response he had seen in his 20+ years on the job. So our young horse enthusiast daughter was saved by horses.

Liviya was transfusion-independent within about 6 or 8 weeks, so she had started making more of her own blood cells again! She was also on G-CSF (Neupogen®) for many months. Now, every six months she goes back for tests and her counts are still improving.

There was a scare in June of 2016 when her ANC (absolute neutrophil count) levels had dropped significantly. The doctors decided to wait another six weeks to see which direction things went. This was a tense time for us, but when she was tested recently her counts had improved again. Liviya continues to be monitored and will be well into her adult years.