Retired MDS Patient Living Life to the Fullest Since Transplant 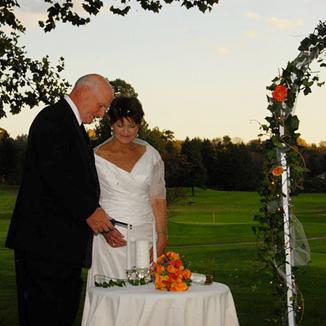 I retired from Dun & Bradstreet, after 35 years of working all over the US and Europe as a business analyst and Vice President of Operations and Data Acquisition.  I was living the life I had always aspired to -- traveling, volunteering for a number of non-profit organizations, taking the occasional consulting job, enjoying a few classes at the local college, and just having fun.

Then, in August 2009, I had a blood test and it showed something was off with my white and red blood cells. I had a repeat blood test in September and it improved slightly, but my doctor still wanted me to see a hematologist. I had extensive travel plans including a month long trip to Korea, Australia, and New Zealand in December and January, so it was hard to coordinate a visit with the hematologist. On January 26, 2010, I had my first bone marrow biopsy and I was diagnosed with myelodysplastic syndromes (MDS). My first thought was, "I can't even spell it!"  The stage was Refractory Anemia with Excess Blasts (RAEB-1) with one chromosomal abnormality.

In February 2010, I started a five-day dose of decitabine (Dacogen®) and chemotherapy and also had the first of about 50 red blood cell transfusions. Ten days later, a day after my 59th birthday, I bit a hangnail and almost died from it because I didn't have any white blood cells to fight the infection. I spent five days in the hospital, where I had several more red blood cell and platelet transfusions.

During the first ten months of chemotherapy, I had a blood test almost every day. Because of the infection early on and my low platelet count, I did not have a central line (an infusion tube located in or near the heart) and they had to use a needle in my veins for every test and transfusion. I became resistant to the platelets and had to have special human leukocyte antigen (HLA) matched platelets. Probably one of my lowest days was in February 2010 when my platelets were 5,000 and my body rejected the platelets transfusion I received. I was afraid that I would die that night. I was constantly amazed at what my body could take and survive!

2010 was a year where I could not travel except for my daily trip to the doctor’s office for my blood test and the hospital for my transfusions. My social support system was my fellow transfusion recipients and my chemotherapy buddies. They were amazing with their courage, compassion, and sense of humor! My daily needs were handled by my loving partner and now husband, David. He kept me germ free and as healthy as he could for a year and a half as my primary caregiver.

In January 2011, I received a stem cell bone marrow transplant from an unrelated donor from the international registry!  I was in isolation at the Hospital of the University of Pennsylvania in Philadelphia undergoing extensive chemotherapy for six days prior to receiving my donor’s stem cells.  During the 34 days in the hospital, we had some vicious snow storms but David made the 90-minute drive every day so he could make my tea when I woke up.

The first 100 days after the stem cell transplant, you’re at high risk and need help. David had to go back to work, so my home caregivers became my three sisters (none of them were a match) and six girlfriends all of whom had to fly from the west coast or the south to take care of me.  From February until April 2011, I was only alone for only one hour due to the transitioning of caregivers.

2011 was a wonderful year. I got a chance at a new life. David and I got married, I welcomed a new grandson, Wyatt, and was so full of gratitude for everything. Physically it was a struggle at times with multiple post-transplant problems such as graft versus host disease and four compression fractures from the steroids. But I was alive, happy, and getting better.

This past year, I came off numerous medications including the steroids. My hair grew back and I am working out with a trainer trying to rebuild my muscles. Wyatt and I raced to see who would have hair first! I am volunteering at the blood bank (I owe them big time!), and driving cancer patients to appointments. Making up for lost time, we started traveling again. In March 2012, we went to the Caribbean; in June, we went to England, Ireland, Scotland and France; California in July and again in August;  Alaska and the Yukon in September, and Panama and Costa Rica in December.  I am getting ready to plan our 2013 trips!

My advice for patients is to research every Web site you can, but keep in mind it is not always current or correct information. Many sites gave me almost no chance of recovery. Read abstracts of the published literature and contact the doctors if you have questions.  Make sure your doctor attends the annual hematology meetings. Because the methods to treat our diseases are changing all the time, you need a doctor who is in the middle of the research or at least keeping up with it. I was fortunate to have the best. Have a support group both professionally and spiritually.  I would never have made it through the tough spots without my husband, my family and friends - and my faith.  Surround yourself with positive thinkers, eliminate or at least limit anyone who is negative from your daily routine.  Change your computer passwords to your goal...mine was to be cured!

So, now I am going on 62 and, I am cured!  Besides Wyatt, I also have around 30 step-grandchildren.  I still keep in contact with them as well. I am traveling, volunteering, enjoying a few classes, and just having fun!  God Bless!

I am doing great!  I am in Colorado right now and I continue to travel. We went to French Polynesia last year, the Bahamas last winter and all over the United States. I have a new grandson, Oliver. We just took my four-year old grandson, Wyatt, to see the "Lion King", and continue to visit my step children and grandchildren in Oregon and Washington.

I spent 6 1/2 months on a 42-foot sailboat with my husband sailing from the Chesapeake Bay down to the Intracoastal Waterway in Florida and then spent most of the winter in the Exumas and Abacos Islands in the Bahamas!

Life is good.  I do have Chronic Graft Versus Host Disease of the mouth and skin. It has progressed to scleroderma, an autoimmune disease characterized by hardening of the skin.  But, with the help of my doctors and husband, I am mobile and able to do just about everything I could before MDS.