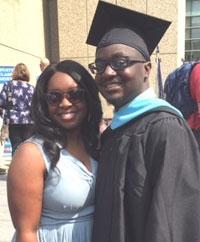 On July 4th, 2014, my 23-year-old son, Jordan, coming from the Washington DC suburbs, visited us (Barnett and Nelda Brown) in La Place, Louisiana. He wasn’t feeling well, so I convinced him to go to urgent care before leaving to return home. He was given antibiotics because he appeared to have three cysts in his left arm. He made a second trip to urgent care in Virginia to have the cysts lanced and was given a blood test during the procedure.

On Monday July 14th, I received a call at 7 am call from my son.  This never happens -- so I was concerned.  Jordan said his gums were bleeding and would not stop. He’d also received the results of the blood test which was full of low and critical readings. The note on top of the report read “No platelets.” The doctor thought the lab work was a mistake, but convinced my son to seek additional medical help.

On Monday night, he journeyed to the nearest hospital, the Virginia Hospital Center in Arlington, and called to tell me they were admitting him.  He was about to begin several tests. I didn’t want him to be alone, so I contacted my brother, whose son lives in Maryland.  He went to the hospital to be with Jordan until his dad and I could arrive around midnight on Wednesday. My husband wanted to get a hotel room for the night since it was too late to go the hospital but there was nothing that was going to stop me from getting to my son that night! Thank God the hospital understood my situation and gave me a pass to get to Jordan’s room.

By the time we arrived, Jordan had been diagnosed with aplastic anemia and the treatment was to begin on Friday. The doctor carefully explained the rare disease that Jordan had, and the planned treatment which included ATG, prednisone, and cyclosporine. Jordan had a fever and antibiotics were started.  He had no germ fighting white blood cells, so I was very concerned.  I contacted my church, friends, and my relatives in Louisiana, California, Wisconsin, Illinois and Georgia for moral support.   Soon, the fever broke, and the treatment started.

I was glad to know that my daughter, who is a nurse, was flying in to be with us.  It helps to have a medical professional in the family.  She showed up and whipped Jordan into shape. She had him get out of bed, walk the hallways, and take care of himself. Of course, I was in mothering mode - but she was not having it. I gritted my teeth and smiled as the little dynamo took over.

Jordan made it through the treatment like a champ. After nine days in the hospital, he was sent home to recover.  He had daily doctor’s appointments throughout the first month of treatment.

Amazon.com was my friend through this time. The disinfectant wipes, gloves, and masks were delivered to Jordan’s house.  With his white blood cell counts down, his house had to be sterile, and his contact with other people minimized. I had brought my computer and was working remotely from Virginia.  I was attending meetings in parking lots, while sitting on the window ledge in the hallways - wherever I could find space.  I had settled in for the long term.

Three weeks after leaving the hospital, Jordan and his sister decided that I needed to return to Louisiana and allow Jordan to adjust to his new normal.  He would need blood transfusions and platelets to sustain his health until his body had recovered.

It was difficult to leave with my son requiring so much care, but your children are stronger then you think.  A week after I left (August 25th), Jordan called to tell me his white count was back in the normal range, he had taken off his mask and his red count was approaching normal. Jordan decided to go on with life.  He could not stand around waiting for something to happen and let life pass him by.  He went back to work the moment I left the house and started the fall semester at George Washington University.  He is a full-time student and works a full-time job. He is scheduled to get his masters degree in May 2015 (studying education policy), and I look forward to the celebration. He is a 2013 graduate from the University of Notre Dame where he received a degree in Political Science and Russian Studies.

My son is four months out from his initial diagnosis.  His doctor’s visits have been reduced to every ten days.  The arms no longer look like pin cushions, and I can calmly wait for his calls after his appointments. While his white blood cell count is normal, his red blood cell count and platelets are still low. He continues to be treated with prednisone and cyclosporine, but the doctor is reducing the steroids as his visits continue. I only see pictures of his numbers when Jordan feels he has made progress.  He recently traveled back to Louisiana for a visit and looked great!!

I’m a praying mother and that helps me daily. I have learned a lot while watching my son’s experience with this disease.  Life happens.  No matter how carefully you plan out each detail, be careful to leave room for those bumps in the road that you cannot avoid.  Use them to build character and confidence and live like a champion.