In Treatment at NIH 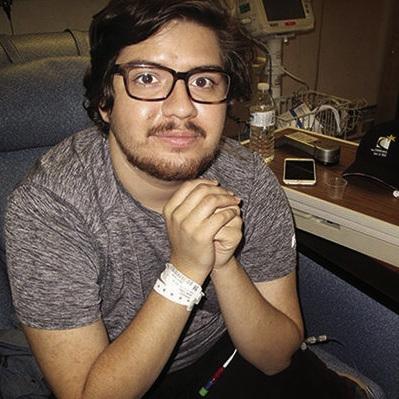 Texas native John Vasquez led an active life until he started to experience unusual symptoms in 2015, including an incidence of numbness on one side of his body. The 20-year-old was soon diagnosed with aplastic anemia.

He sought local treatment and was started on immunosuppressive therapy, causing him to suffer the full range of side effects – fever, chills, nausea and serum sickness, which includes joint and muscle pain. Rather than wait for his doctors’ next steps, John decided to contact the National Institutes of Health (NIH) himself. He was eventually approved for a stem cell transplant as part of a new clinical trial testing the use of cord-blood stem cells with half-matched stem cells from his brother, Isaiah.

Although this approach has previously been tested with other diseases, John became the very first aplastic anemia patient admitted for this protocol, making him the so-called "first in human" test of this particular kind. Study leader Dr. Richard Childs was very pleased with John’s transplant results. "We’re very excited to find that our study combining mismatched, expanded cord blood units and half-matched donor stem cells from a family member had survival rates comparable to those from the fully-matched related donors."

John and his sister/caregiver Isabella journeyed to NIH from their hometown of San Antonio in May 2017 so he could begin the chemotherapy and radiation treatments that are required to prepare a patient for transplantation. With most of his family by his side, the stem cell transplant occurred on August 11. If everything goes according to plan, John and his sister could be back home by February of next year.

We spoke with John about a month after his transplant. "At first there was a lot of pain from the transplant conditioning, and it really took around a week and a half for this pain to recede. But I am getting back to some physical activity – even small things like getting out of the chair or bed and walking around the hospital floor is considered progress. Each day, I feel a little bit better and more alert."

John’s medical team taught Isabella how important it is to rebuild her brother’s strength through activity. "The whole idea is to get him physically and mentally active again in this immediate post-transplant period. I have to push him to the point that’s allowed for his condition, but it’s essential for his recovery," she told us. "I have to make sure he’s meeting the goals that are set, and let our team know if he isn’t. But they say that he’s coming along well!"

John has been residing on the NIH campus since May but has mostly been staying at the NIH Children’s Inn following the transplant. That’s where families participating in the Institute’s cutting-edge treatments are provided with comfortable housing. Moving from inpatient status to an outpatient facility marked a new phase in John’s post-treatment life.

It’s not uncommon for patients in this phase to return to the hospital setting from time to time for extra care. Their immune systems are still delicate, and every new development during a patient’s recovery gets a rapid response to these changes. John, for example, was moved back to the hospital for two weeks of treatment following a minor infection.

His sister says that, "As a caregiver, I’m relieved when John is back in the outpatient setting, so I don’t have to worry about what might be happening to him when he’s there and I am here."

John has a different point of view. "Inpatient days have a set routine. Everything comes to you – the medication schedule occurs at a certain time and most other events and appointments are very structured. As an outpatient, my days seem to run together and are more tiring because of the physical activity required to just get around and do what needs to be done. I still have to go back to the hospital for certain things two or maybe three times a week."

John reports that it can be hard to find the energy he needs after being so sedentary as an inpatient, but his sister remains a guiding light. In addition to loving support, she helps her brother stay active and keeps track of his complex medication schedule. "I try to increase his activity duration by small increments, around 5 minutes each day, and I make sure he’s eating properly, getting enough fluids and taking the medicines."

She also cherishes the chance to get him out of the facility now and then. Even though he always has to wear a mask, Isabella likes to take her brother on short shopping trips with other patients and caregivers staying at the Inn. While these little excursions may result in getting a few staples, they are more about patients and families who long to begin the process of normalizing their lives, one day at a time.

See John's updates, as he progressed though his recovery.