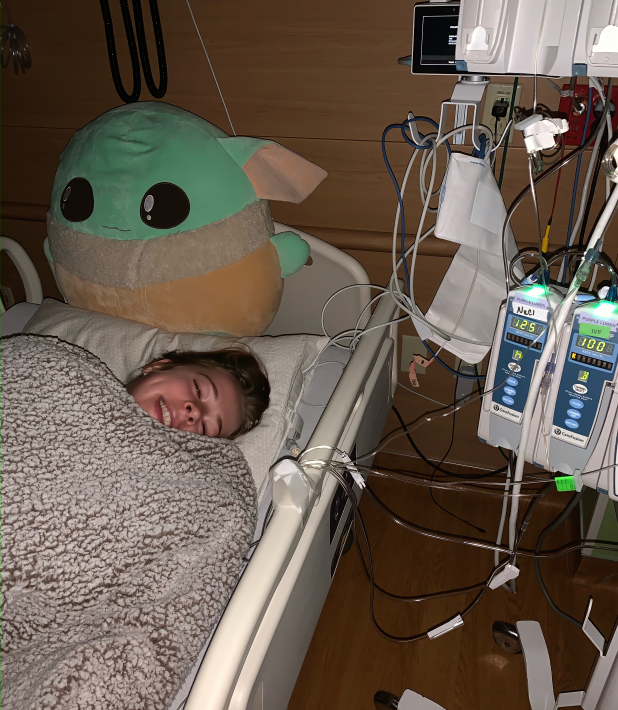 Two transplants later, Jenny is off to medical school!

An athlete since preschool, Jenny couldn’t understand the fatigue she’d been having.  Only 10 minutes into a soccer game in high school, she had to stop.  On an open-gym morning, she felt so horrible she passed out while she was walking to her car to drive home.

When Jenny’s dad came to get her, he took her directly to the pediatrician.  There, the blood counts showed a red blood cell level of only 4.5, and her platelets were extremely low as well.  Before she could understand what was happening, her parents drove her to the emergency department at Children’s Hospital.
Jenny was 16.  Instead of being terrified, she was just unsettled about what the blood counts and further testing could mean.

Immediately she was admitted to the Hematology/Oncology/Transplant section.  Within a couple of days, the biopsy showed she didn’t have leukemia but instead, aplastic anemia in need of an immediate transplant.  Jenny says of this time that for her, the name of the disease and what it meant was so rare that she couldn’t wrap her head around it.

Fortunately her brother was a match!  She went home for a week or so, receiving transfusions while she waited for the transplant. On November 3, 2016, she received the cells from her brother.  She had implantation in about five weeks, despite having appendicitis during the fourth week in the hospital.

The next five months Jenny spent at home. Her sister brought home her books and assignments, delivering the work back to school. Jenny was able to keep up with her studies, even AP Physics and Calculus. Her teachers helped her by phone with challenging assignments, but she was able to return to school in the spring.  In addition, she worked hard with the physical therapist to regain strength and endurance. In March she attended the Soccer Camp with her school because she was allowed to practice outdoors.  She says, “Soccer was the one of the things that made me feel most normal.” Even though she missed the basketball season, she was able to return to school one week before the first soccer game, eventually scoring the winning goal of the State Finals!

Jenny’s senior year started normally. Because she’d missed college athletics recruitment, she assumed she wouldn’t be able to play at college. However, her parents had other ideas. They had recorded her on the field, so they sent the recordings to the Athletic Department at Iowa, where she had wanted to play. One day she received a surprise call: she had an invitation to play for the University!

Freshman and Sophomore years at the University went as she’d hoped. She played soccer and kept up with her studies.  Yet in her Junior year, as they approached the Big Ten Tournament, she stared bruising oddly.  She wasn’t as fatigued as she was prior to her first diagnosis, but her feet started tingling during the game. Her team was up against UCLA. She was playing, but at the end of the first half, her vision started fading. She stopped for several minutes, but later returned to the game.

Jenny’s parents were alarmed at this episode. She went for a blood draw, and her counts were very low again. She thought, “This can’t be happening again.”  She had never considered that the disease could return.  Her bone marrow cellularity was only at 30%.

This time, the doctors at Children’s Hospital wanted to try a clinical trial that could stimulate her cells to make good blood again, accompanied by transfusions.  After a few months, the biopsy showed only 10% cellularity.  The health care team asked what she wanted, what her goals were, and how she felt about treatment objectives.
She decided to have another transplant, again with her brother as donor. This time, he gave peripheral stem cells. She received the newest protocols for her chemotherapy, a much lower dose than she had 5 years earlier. Her new-cells-birthday was October 7, 2021, and she was only inpatient for three weeks.

During this stage in her life, Jenny said her parents were supportive. They watched movies with her from home, keeping to her schedule. She said she tried to enjoy all the time she had with her parents, knowing that after college she wouldn’t be able to spend so much good time with them.  She was grateful for these days they spent together, in spite of the extreme social distancing, not leaving the house for more than six months!  She was also grateful she’d decided to take the whole year off from university, so she was able to concentrate on recovery alone.

Jenny returned to her Senior Year the next autumn.  She continued with her pre-med studies and applied to medical schools, as she continued playing soccer. She applied to several Schools of Medicine, receiving the first notice of acceptance in October 2022!

As she reflects on having two transplants, Jenny’s recommendations for other patients are clear.  “Be patient,” she recommends, “it’s a marathon, not a sprint!”  She also advises that patients appreciate the little things when returning to them, such as going to the grocery store or practicing alone at the soccer park. “Appreciate each little victory,” she says, such as leaving the IV pole behind.  No matter what your little victory, celebrate it. And don’t neglect asking for photos of your family and friends, which keeps you up to date with their adventures.  “Remember,” she says, “I only compared myself to myself.  Life is a whole new thing when experiencing a transplant,” so give yourself some grace and be thankful as you can.