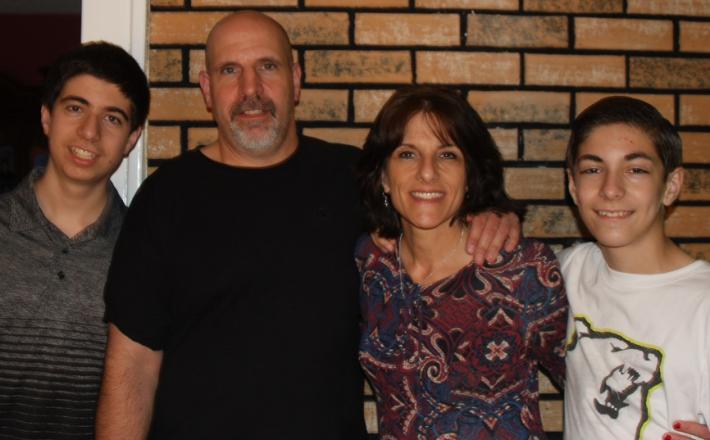 On April 15, 2007, my husband Jeff, age 39, tucked our two and three year old boys into bed. He suddenly yelled down to me in a concerned voice, “Honey, my vision is slightly distorted, and it must be a migraine. I’m going to lay down for a bit.”

I was not extremely concerned since Jeff had gotten migraines in the past. But the next day, the other eye was also adversely affected in the same way. We sent the boys to day care, and went to the eye doctor, who immediately referred Jeff to a retinal specialist.  As my concern grew, I still could never have predicted the severity of what was happening. Once the retinal specialist diagnosed a hemorrhage on Jeff’s retinas, he immediately told Jeff to get blood work and so we rushed to his doctor.

The 7:00 a.m. phone call the next morning was from his doctor who stated, “I need to see you now, so we can discuss the results.” Once we arrived at the doctor’s office, he said “Your red and white blood cells and platelet levels are critically low. I am stunned that you are still standing and have not collapsed. You must go to the hospital now to get blood and platelet transfusions.” Days later, after myriad diagnostic tests, blood and platelet transfusions, and painful bone marrow aspirations in his hip, Jeff was diagnosed with very severe aplastic anemia.

We next met with a hematologist at Hackensack University Medical Center. Once he reviewed Jeff’s records, he told us that Jeff might not survive without a bone marrow transplant. I didn’t even know what a bone marrow transplant was. In waiting room before Jeff received platelets and a blood transfusion, he leaned over to me and quietly assured me, “Don’t worry, I’m not going anywhere.”

I drove home from the hospital, as Jeff, drained from the day, reclined his passenger seat for the ride. As I exited the parking lot, I suddenly noticed a car in front of us with a license plate that said HVFAITH. I tapped Jeff’s arm and said “Look at the license plate. Can you believe it –we’re being told to have faith!” From this day forward, we knew that we would not be facing this life-changing event alone. I knew no matter what, that somehow, everything would be okay.

In the meantime, Jeff’s siblings (three older sisters and one older brother) were tested in order to if any of them was a bone marrow match.  Oddly enough, a few days later, Jeff’s brother boasted aloud at a family get together, “I know that I am going to be a match - I am sure of it! Not one of us responded to his affirmation. Approximately one week later, we received a phone call from the head nurse at Hackensack University Medical Center. She sounded elated when she revealed that two of Jeff’s siblings were a bone marrow match; with his brother Frank being almost a perfect match to Jeff’s DNA! She exclaimed, “You have no idea how lucky you are that you have a sibling who is a match - most people have to wait for a match.” Although this was amazing news, we still felt numb and overwhelmed at the thought of what lay ahead.

After a few weeks, the pre-bone marrow transplant regimen began. At this point Jeff’s physical, mental, emotional, and spiritual strength were truly tested. His body was pumped with high dose chemotherapy, horse serum and other drugs in order to eradicate his immune system. On June 21, 2007, Jeff received the bone marrow transplant.

Although I had remained with him the entire day, I returned home in order to pick up the boys from day care. That evening, the sky became dark and a quick storm passed. At that moment I opened the back door and observed the most beautiful rainbow I had ever seen before. I felt peace and tranquility that I still am unable to explain.

Our sons are now 13 and 12.  Jeff and I continue to adapt to our new normal. His body hurts him every day. He still has blurred vision and has developed sleep apnea, deep vein thrombosis, and herniated and bulging neck and spine discs due to deterioration and softening of the vertebrae. He can no longer work and has developed depression and anxiety. In addition, he became addicted to opioids from 2009 until 2016; but we are incredibly grateful that Jeff was able to recover. Despite all of the adverse after effects from Jeff’s ordeal, he still tells me that he is the luckiest person alive and that he couldn’t be happier with his life.  He is funnier and more positive than ever. One would never guess what Jeff has been through. Prior to our life -changing event, we knew we were blessed to be soul mates in a relationship filled with love, devotion, trust and faith. However, we now appreciate every moment because we realize that life is truly a gift.