An Unusual Route to Diagnosis 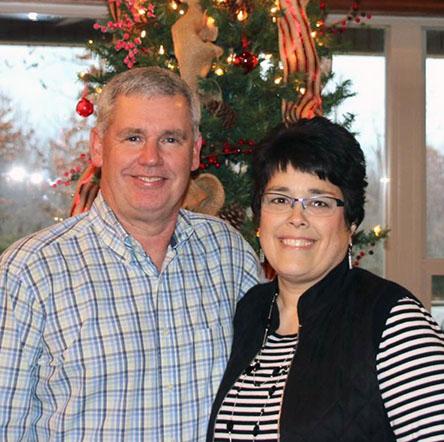 Although it sounds strange, I am beginning to believe that breast cancer possibly has saved my life. In October 2015, I was diagnosed with stage 2 lobular carcinoma of the breast. My cancer was found during my routine mammogram. I opted for a bi-lateral mastectomy and then had 33 radiation treatments in early 2016.  I saw my oncologist every month due to my treatment and she ran blood work every time. My numbers had been a little off for some time prior but nothing too worrisome.

However, my oncologist began to notice that my numbers were not improving- actually there was a continual decrease in my hemoglobin, hematocrit, and my red and white blood cell count. She ran several tests, and I had a liver biopsy.  After a while she decided that a bone marrow biopsy was needed.  When we returned for the biopsy results, we were shocked at my doctor's words.

My oncologist said I had MDS, specifically the 5q deletion subtype. She explained that this typically is only seen in people around age 70.  She said that the best treatment for a 50 year-old like me, would likely be a bone marrow transplant. She then referred me to Kansas University (KU) Cancer Center in Kansas City, because they were the closest transplant center to our home.

We went to KU the next week and began meeting with the staff there, and they explained the process to us. He agreed that transplant was my best option. KU performed another bone marrow biopsy.  After the doctors consulted with each other it was determined that my blast count (young, immature white blood cells was better than expected so we could hold off on an immediate transplant.

They decided to put me on an oral medication, lenalidomide (Revlimid®) and see if that helped my blood counts. Thus far it has worked as hoped as hoped so I will be on my current regimen for the foreseeable future.

In the meantime, KU had my brother and sister tested to see if they were a donor match for me. It was found that they were a 100% match to each other. We had to wait for insurance approval to test my tissue with theirs.

My daughter, Sara, decided she couldn't wait to see if they were a donor match and started the process with DKMS to see about a donor drive! The thought of people coming and getting swabbed to see if they could help me was overwhelming and humbling.  My family and church family were awesome with their support of encouragement and prayer.

My insurance finally gave approval to test my tissue and we couldn't believe the results. Not only did I match my brother but I matched my sister 100%! We had been told that there was only a 25% chance for a 100% match to a sibling.

Sara decided to continue with the drive because there are so many patients that are not as fortunate as me. I have a couple of friends that may end up eventually needing a transplant because of their blood diseases, and maybe this will help them. I want to do what I can to help others. So I will learn more about blood disease and be an advocate for those needing a transplant.