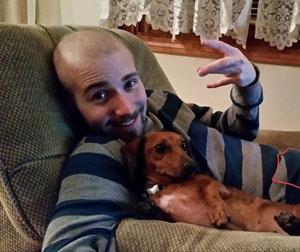 My husband Rick and I knew Jake was not feeling well. He kept denying it and saying he was fine. A bloody nose scared me, and then I remembered how my brother-in-law had them as a child and thought it was hereditary. Then his high school said he had another. He began to ask us if he looked pale. We said that he did. He also was coughing and seemed lethargic. We encouraged him to go to the doctor, but he said he was fine.

It must have been divine intervention, because when his truck broke down, I had a chance to bring him to school  where he was in his senior year, and on the ride I begged him to tell me what was wrong. As we got closer to the school he said to me, “Mom, it’s too late, I’m dying.” Those were his exact words.

He then proceeded to tell me bits and pieces. He said he didn’t even have the energy to sit in the shower. He had been waiting in his truck at the end of the road until I went off to work and would then return home and go back to bed. When he came home from his friends, he’d sit in his truck for what seemed like an hour and then drag himself up the stairs.

I imagined that he probably had strep throat that he let go too long. Immediately, I got him to the doctor, and he was sent for blood work. He went to his grandmother’s to lay down while I was at work.  When I went to pick him up, the doctor called and told me to bring him to the emergency room at Baystate Hospital in Springfield, Massachusetts and that he should go directly to the desk to be admitted.

Within an hour, he was getting blood transfusions and platelet transfusions. The emergency room doctors told me that they had called the hematology and oncology department. They thought he had leukemia.

Jake spent weeks in the hospital going through test after test. He had a bone marrow biopsy and a lymph node biopsy. After all the tests, they said it was a virus and would clear itself up.  After many weeks of blood and platelet transfusions and no improvement, we decided to take him to Massachusetts General in Boston, about 100 miles from our home in Westfield, Massachusetts. After reviewing the medical documents from our local hospital, they agreed it was a virus and would take a while for his blood counts to come back up.

Jake continued to be transfusion dependent, and we returned to Boston for another bone marrow biopsy. I felt that if I knew what was wrong with him, I could cope with it. I was wrong. After four months and three bone marrow biopsies, the doctor called and said he had paroxysmal nocturnal hemoglobinuria (PNH) We had never heard of this. Our friend, Kevin, stepped in and said we had to get him to specialists to figure out what was going on. He had the time to help us research the disease, call physicians, and reach out to other people in similar situations.

We took Jake to a doctor at NYU Langone Medical Center in New York that specialized in PNH. He was one of the most knowledgeable doctors I’d ever met, and he knew just by looking at the records and symptoms that Jake had severe aplastic anemia and PNH.

Scared to death, and confused, my son was able to graduate from high school with the help of transfusions. Because of his blood levels, he could not attend the last few months, but he finished with a tutor. As the rest of his classmates went off to celebrate, we checked in to Massachusetts General Hospital for ATG (anti-thymocyte globulin) treatment.  The doctor wasn’t convinced that Jake had aplastic anemia, but the same treatment was used for PNH and aplastic anemia, so he worked with the doctor from New York.

We went to the National Institutes of Health in Maryland to get another opinion and had heard about some trials that were promising. Another bone marrow biopsy was done and lots of blood work. They would not let him leave without a transfusion because his blood and platelets were so low. We met with two wonderful doctors there. They asked why we didn’t want to do a bone marrow transplant, and I explained that the disease could come back. They both asked, “What makes you think it can come back? It is a potential cure.”

We made many contacts on the Internet and followed people’s progress on Facebook.  ,An aplastic anemia and PNH patient from Indiana who we met through the website, helped give my son the courage to have his bone marrow transplant. He told Jake about his transplant experience which inspired him to overcome his fears.

We decided to interview a couple of hospitals regarding a bone marrow transplant. When we met one particular physician at Dana-Farber Cancer Institute in Boston, we were confident in his knowledge and he made us feel more comfortable. We knew he was the one to perform the transplant as soon as we met with him. He was recommended by the doctor at NYU Langone.

We then started the search for a donor at Dana-Farber. The doctor found us a donor, but a couple of weeks before the procedure, it was canceled. The doctor had found Jake a better donor, but did not want to inform us until everything was finalized. The waiting was unbearable. Would Jake change his mind? What happened to our donor? Weeks later, we were informed a new one was found. The donor was a 10/10 match, and he was 18 years old. Jake was 19 years old at the time. We were told only that it was a donor from the United Kingdom.

The chemo and radiation treatments were tough. Then came the day of the transplant. Scared that our donor would cancel since he was so young, the nurses tracked it when it got to the plane, when it landed, and when it arrived. We all wore green the day of the transplant. We received a prayer from a priest.  It was so peaceful, I can’t explain it, but it felt as though a miracle was happening.

Today Jake is making good progress. His doctor says he’s making him look too good. He reached his first transplant birthday on July 31 of this year.  He’s had a few minor rashes, but my son looks and feels great most days. There are no more transfusions, and his blood counts are great. I see his rosy, beautiful face with a smile. His donor sent a card stating for him to live his dreams and I believe that will occur.

My son’s dream is to be a firefighter. He has been a volunteer firefighter since he was 16 and is a first responder for two volunteer fire departments. He is going to start emergency medical technician training in January, which is required before you can get on a full-time squad. He loves to help people.

Two and a half years ago, I never thought we’d be at this point. People would always say “at least it’s not cancer.” A bone marrow failure disease diagnosis was actually more difficult because of the lack of awareness and funds for research and treatments. We need to get the information out to possible bone marrow donors so they can contribute and save a life.

So there is a light at the end of this long tunnel. We hope to meet our son’s donor next year.  Life isn’t the same, but we found true faith and kindness from friends and family members. He received great care from the staff at Dana-Farber and our angel Kevin found us all the right people and places to seek help. I would have done whatever it took as a mom make him better. This completely selfless donor, just a boy himself, saved my son.  We are forever grateful.