Doctor Helps Determine Her Own Aplastic Anemia and PNH Diagnosis 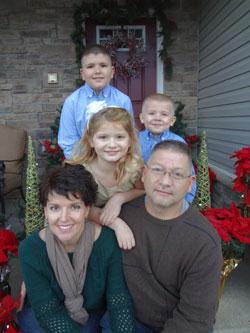 “I was fortunate to have a medical background, because with it I was able to help diagnose myself with aplastic anemia and PNH,” says Dr. Heather Vega. A Pittsburgh native, she is a family physician living in Bridgeville, Pennsylvania who received her medical degree from Lake Erie College of Osteopathic Medicine.

“I was 30 years old and in a hospital-based practice 12 years ago when I noticed a bruise on my leg,” says Vega.  “It was so strange because a few nights prior, I had just had a dream in which I was covered with bruises.”

“After ordering some blood work and finding that my platelets were low, I called a friend who was a hematologist who then referred me to a hospital in Pittsburgh for a consultation,” says Heather.  “Over a month’s time and a few bone marrow biopsies, my blood counts continued to drop lower and lower.  I was on rounds in the hospital one weekend and just had my labs done. I was neutropenic (abnormally low white blood cell count) and was advised to immediately go home by a friend who was a hematologist.”

“Within a week, I had an additional bone marrow biopsy and was found to have aplastic anemia. My hematologists felt that I might have been a candidate for a bone marrow transplant, but unfortunately there was no match.  Over a year’s time and after being treated with cyclosporine, steroids, ATG, and G-CSF (Neupogen®), my blood counts came back to normal,” she says.

A mother of three children with her husband Wayne Nagle, a high school business teacher, Dr. Vega required no further medications between the ages of 32 and 39.

“I felt fine. There were no problems. But two years ago, I experienced some vague abdominal pains,” she said.

Over a year’s time, she underwent multiple tests without an answer.  One night, the pain became so severe that she went to the hospital, and after undergoing additional testing she was advised that it was her gallbladder.  A day or so after discharge, Dr. Vega says, “A light bulb went off. Oh my God -- I have PNH. I know the signs. I Googled the symptoms for paroxysmal nocturnal hemoglobinuria and emailed my hematologist who sent me for further blood work.  Since most doctors have never encountered these diseases, it does make for a difficult diagnosis. But after my diagnosis, I was placed on eculizumab (Soliris®) in a twice-monthly regimen. Although I remain mildly anemic, I am managing well.

“I’m practicing again and it’s been a very interesting 12 years,” she says. “I’ve found that being diagnosed with both aplastic anemia and PNH makes me more compassionate as a doctor. It is one way I can truly relate to my patients.”

As a physician, Heather says she is a firm believer that some things happen for a reason and that we learn from those experiences. “I used to worry about little things.  Now I focus on what’s really important,” says Heather.  “When you are diagnosed with a bone marrow failure disease, you must keep positive and keep focused on what’s important in your life. I exercise and try and take good care of myself. And, it helps that I’m a mom. My goals for 2015 are to exercise more and continue to stay healthy.”

“I encourage patients who are newly diagnosed with a bone marrow disease to reach out to other people through AAMDSIF and visit their website,” she says. “It’s scary, but things are getting better.  Reach out and connect with other patients. They are your best source for inspiration and hope.”