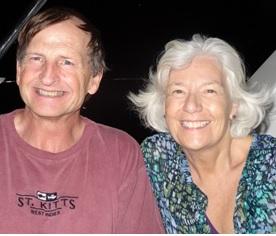 My odyssey with bone marrow failure diseases began on Mother’s Day, 2007 when I found a deer tick embedded in my upper arm.  Three weeks later, a positive Lyme’s disease test qualified me for ten days of doxycycline (an antibiotic).  About six or seven days into my treatment, I was feeling worse, and called my primary care physician.

One day later, after receiving a blood test, my physician called and instructed me to have someone drive me immediately to the local emergency room for a blood transfusion.  “They’re waiting for you,” he said.  My youngest son drove me to Hunterdon Medical Center near our home in central New Jersey and I walked in while he parked the car.  I didn’t know I wouldn’t be leaving for five more days.

Once I explained my situation, they set about finding a vein and were unsuccessful. Eventually, they put in a PICC line.  While the nurse began transfusing the first of three units of red blood cells, doctors began coming in to meet the woman “whose blood values do not support life.”  It turned out my hemoglobin was under three (12-15 normal), my white cells about .1 (3.5 – 10.5 normal) and my platelets under 5,000 (150,000-450,000 normal).  Those numbers meant nothing to me then.  All I could do was remind everyone that I was leaving in three days for my first European cruise.  Most everyone smiled at that, and a kind nurse finally said, “Honey, you’ll be here for a few days. Europe will have to wait.”

A million tests and a painful bone marrow biopsy later, my new doctor, a hematologist, told me that a preliminary diagnosis of an aplastic crisis had been made, owing to the presence of Lyme’s disease, and a recent course of doxycycline, both apparently being known triggers for aplastic anemia.  I was learning a whole new vocabulary, and what was eventually to be a whole ‘new normal’ for me.

Fast forward a few weeks. There were multiple tests by an infectious disease doctor, a thorough work-up by an ophthalmologist (bleeding behind the eyes), and a cardiologist, which yielded no results, but my very low blood counts continued for all three cell lines. The “aplastic crisis” morphed into severe aplastic anemia which did not improve. My husband, Paul, and I were now both a little scared, but he continued to be a rock of strength for me every day.

A round of prednisone made my face balloon and added twenty pounds with no improvement in my blood counts.  My hematologist suggested I head off to a large medical center in New Jersey for a second opinion.  Their recommendation was to start a round of rituximab (Rituxan®) - not a normal treatment for aplastic anemia), which didn’t help either.  My life now revolved around twice-weekly complete blood count tests and frequent red blood cell transfusions.  My primary doctor wanted me to go back for more consultation at the medical center, which I resisted. Then my world fell apart a little more. My mom died suddenly in November 2007.

I needed to be left alone for a while, so the subject of a second opinion didn’t surface again until after the New Year. My primary doctor called down to the National Institutes of Health (NIH) in Bethesda, Maryland and asked if they would see me. In February 2008, Paul and I went down to NIH so I could be evaluated for participation in clinical trials. There, I met the angels who help people like me every day there and after a thorough workup, they offered me enrollment in a clinical trial for aplastic anemia.  They also diagnosed me with PNH, but counseled me that the aplastic anemia needed to be addressed first. This particular trial was to judge the efficacy of horse ATG (anti-thymocyte globulin) versus rabbit ATG. The ATG treatment was paired with cyclosporine in both arms of the trial.

In April 2008, I was randomly selected to receive horse ATG, and after testing positive for flu, I was isolated for the treatment. Could my luck get any worse? While I had no serum sickness (side effect of horse ATG treatment), I had a serious reaction to a platelet transfusion which kept me there for five more days while they flushed me out with fluids, bag after bag.

I returned home, waiting for the ATG to kick in. I was also concerned about what the new diagnosis of PNH would mean. When I returned for my one-year check-up the following April, they offered to administer a second round of ATG since my counts were still low, and I was still getting regular transfusions.  I declined because I didn't want to go through it again. I was lucky that my counts later improved and on June 3, 2009, I received my last transfusion, about 14 months after the initial ATG treatment. My counts stayed steady  – hemoglobin in the 10 -12 range, white cells almost normal, and platelets finally climbing from 30,000 to 100,000 and over by 2011.

Due to my PNH, my red blood cells had been merrily bursting (hemolysis), with no concern for me.  Occasionally, I was having PNH episodes which included belly pain, difficulty swallowing, and darker urine – all familiar symptoms for the PNH patient. In spring 2011, in my yearly check-up at NIH as a result of the trial, my doctor recommended beginning eculizumab (Soliris®).  It was another new normal, this time a positive one.

Along the way, I found the Aplastic Anemia MDS International Foundation, and its message of answers, support, and hope.  I have found all of that and more, and I have found fellowship there. My journey through the world of bone marrow failure has been rocky, and sometimes scary, but the foundation focuses on making it all a little less scary, a lot more comprehensible, and far more hopeful. Over the last eight years, I’ve attended at least five patient conferences that have offered invaluable information and support, because I always learn something new when I attend.  It helped immensely going to patient conferences, and meeting people like me, because you do feel so alone. I’ve also availed myself of the live and archived webinars, and found useful information there, too.

I’ve realized over the years that sometimes you need to lean on the people who love you, and sometimes it’s just you and those low blood counts. But in the end, the support and love that surrounds you overshadows the dark stuff, and brings light to the days. I was truly afraid those first two years. I had never heard of this disease before, and the prognosis you read about it on the Internet was very frightening. I had to force myself not to obsess about it, and just get through one day at a time.

Paul and I have three sons who were 17, 20 and 22 when I first got sick.  We told them the truth about what was happening to me, and that I was working on getting better, and luckily, I did.  We focused on the positives as they happened - increasingly higher counts, fewer transfusions, and finally, remission.  They know that the PNH is under control, and we don't talk about that at all.

When I was diagnosed, I was 51 years old. Today at age 59, I’m functioning well. All three cell lines are still mostly in the normal range. I even hit a high of 155,000 in the platelet count.  I’m doing well on eculizumab though sometimes I experience nausea and headaches. Apparently, the doxycycline cured the Lyme’s disease. I did get a thorough workup with an infectious disease doctor and I tested negative for all other tick-borne diseases.

I travel as much as I can. I did get to go to Europe on a cruise. Life is good, and I never forget what Dr. Neal Young said to me when I was first seen at NIH. He looked me in the eye, and said, “Don’t let this disease run your life.” I live by those words every day.