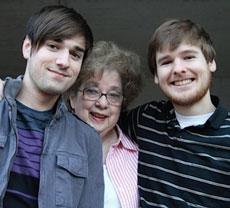 My name is Dylan Martin. I am 24-years old and I was diagnosed myelodysplastic syndromes (MDS), or, at the age of 17. It is familial MDS - the cancer runs in my family. When my mother, Leigh Ann, was first diagnosed, doctors told her she would never have to worry about my brother and I having it. Unfortunately, the doctors were incorrect. When my brother, Patrick, was 19, he was also diagnosed. About a year and a half ago my grandmother, Mary, found out that she had MDS.

According to the Leukemia and Lymphoma Society and all the doctors and medical professionals my family has seen, my family is the only one they are aware of that has four people with MDS. My mother and I took action too late, and things became very serious. Because the MDS affected our blood counts, and in turn our immune systems, we both caught rare infections and became very ill.

I did not receive any treatment for my MDS when I was diagnosed– doctors never prescribed any medication. For five years, I would just go in occasionally for blood tests, which remained steadily lower than average. But then I became ill. After having to quit work and school, it took nearly six weeks to figure out what was wrong with me. I was given a 10% chance of surviving, and spent three consecutive months in the hospital as they treated me for a rare lung infection, mycobacterium kansasii. I pulled through and started to show improvement and was finally discharged from the hospital in July 2013, but was back shortly with another lung infection. Luckily, the second infection was not as serious.

For over a year, I went to Emory University Hospital’s Winship Cancer Clinic in Atlanta to receive photopheresis treatment, which is for my chronic graft versus host disease, or GVHD. I developed GVHD as a reaction to the bone marrow transplant, and it affects my eyes, skin, stomach, mouth, muscles, and strength. In September 2014, I was so weak at one point, I was unable to walk or even dress myself to go to my doctor’s appointment. I also have really bad neuropathy in my feet (tingling, pain, numbness or weakness) from the chemotherapy, radiation, and all of the medication I had to take for the infections I have, which makes it difficult to walk or stand for long distances.

Having cancer has deeply devastated all of us. My mother and I both receive a limited disability income. I have Medicaid, which pays for most of these expenses, however it is often unreliable in the sense that it is on a month-to-month basis, and sometimes it takes a long time to actually cover costs. Because of this, I am often left frantically trying to find a “plan B” to cover costs whether it be through the medication manufacturers or other patient assistance programs. Not being able to afford one of my medications, which costs thousands of dollars, is one of my greatest fears.

In addition, and to soon further our financial burden, my brother, Patrick, will most likely have to have a bone marrow transplant sometime in the near future. He has been doing well. His immune system has always been stronger than mine. My counts got really low, which is why I caught lung infections and got so sick to begin with. He has only had his counts checked occasionally since we found out about our MDS. Last time he checked they were still lower than average. His philosophy is that if he is doing fine there is no need to do anything about it.

My grandmother, Mary, unfortunately, is too old to have a bone marrow transplant. She too became very sick shortly after being diagnosed with MDS, and is currently bedridden after spending about seven months in the hospital, rehabilitation centers, and nursing homes. She has to get a blood transfusion about once a week now. Because everything happened so suddenly, my family has exhausted much of their finances to provide the care for my grandmother and to keep her alive. My mother currently lives with both of my grandparents, taking care of them. They live about an hour away from me.

A few weeks ago my grandmother tried to get up by herself to use the restroom, but she fell and broke her elbow. She is in a cast now for a few more weeks. They were going to do surgery, but thought it might be too risky for her situation. I can tell that my grandparents are somewhat drained, tired of not being able to do much for themselves. It breaks my heart, but we don’t really know what to do.

My mother is coming up on her sixth transplant anniversary. I like to tell people about my mother because if it was not for her encouragement and being by my side practically 24/7 while I went through everything, I don’t know if I would have had the strength to be here today. My mother’s survival showed me that I could do it myself.

I live with a friend, helping out with rent, bills, food, and anything else I can contribute. My blood counts are slowly returning to a normal range as the doctors gradually reduce the immune-suppressing and anti-rejection medicine I take. I go to the Emory University Clinic about once a month to check up with my doctors in regards to the MDS and GVHD (Graft versus Host disease).  I also go once a month for intravenous immunoglobulin (IVIG) treatment in hopes of boosting my immune system and for phlebotomy due to high iron counts from receiving so many blood transfusions in the past. I also receive pentamidine breathing treatments, which help prevent a type of pneumonia common with patients with compromised immune systems. In total, I end up going to Emory about four times a month.

A year ago, doctors gave me permission to return to school at Kennesaw State University in Kennesaw, Georgia. I’ve been taking the majority of courses online to avoid contact with others and reduce the potential of getting sick or infected. In my first semester after returning to school, I made the Dean’s list, and in this most recent semester I was on the President’s list! The upcoming fall semester will be my hardest I believe. I am registered for five classes that I’ve heard are difficult.

I plan to finish my degree by the end of the spring semester next year. I chose to study information security because computers and technology have always interested me, and there is a growing need for people in this field. Once I graduate I would like to work in a big company or part of the government, and be able to put all of my knowledge and studies to good use securing important company and customer information.

I want to be an example that even though we are sometimes faced with great obstacles, we can overcome them, beat them, and go on to accomplish great things. I want to continue with my life and goals, be successful, and do what I can to help my family be happy and healthy, and help others who are going through similar experiences.