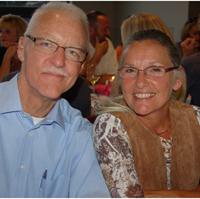 When Duane Draper was diagnosed with MDS in July, 2009, the 57-year-old father of two grown children was asymptomatic and didn’t even realize that there was a problem with his health. Though he had been feeling slightly more fatigued, he attributed it to aging and didn’t worry about it. However, during a  physical, his physician did some routine blood work and discovered that all three of his blood counts were low.

“Initially, I was really surprised to learn that my blood counts were low,” says Draper. “I’ve always been really healthy, with no major health issues that people get, like high blood pressure or diabetes.”

Duane’s wife, Lesley, was also surprised. “Everything we read about MDS was quite scary, because as far as we could tell, unless he got treatment, his prognosis was not very good - even though he seemed so healthy,” she says.

Two biopsies confirmed that Duane had MDS, and  he soon started exhibiting clearer symptoms such as fatigue, shortness of breath, and a rapid heartbeat. In October, Duane was hospitalized for severely bleeding gums, for which he required his first platelet transfusion. Continuing drops in hemoglobin levels necessitated a blood transfusion as well. Procrit shots increased his red blood cell production while he explored his options for treatment.

When Duane received his diagnosis, he started rigorously exploring his treatment options.

“I read everything I could about MDS on-line, but eventually I had to pull back because I was cramming my brain with too much negative information,” says Duane.

Doctors at the Dana-Farber Cancer Center in Boston told him that he qualified for a full stem cell transplant, and they started searching for a donor. Neither his wife nor his siblings were matches, but Duane was lucky to have a relatively common human leukocyte antigen (HLA) type, and in December, 2009, a willing donor with a perfect10/10 match to Duane’s marrow was found.

Though Duane is grateful for the precious gift of marrow that gave him a second chance at a full life, the transplant itself was extremely difficult. His insurance company wouldn’t allow him to do the transplant at Dana-Farber, so Duane had to move to New York for five months for inpatient and outpatient treatment at the Memorial Sloan-Kettering Cancer Center. Luckily, Duane’s company was very supportive and he was able to take five months of leave from work. His insurance covered some of the cost of the move and temporary housing expenses in New York. Nonetheless, he found the whole process of waiting to find out if he was qualified,  waiting for a donor, and moving to New York to be very traumatic.

The first eight days of Duane’s treatment consisted of chemotherapy sessions to destroy his own bone marrow. During this time, he experienced nausea and insomnia. Then came the surgery, followed by four and a half weeks in an isolation room. Anyone who came to visit him had to wear scrubs and a mask to avoid spreading any common illness that could be fatal to him with his weakened immune system.

After the surgery, Duane experienced several unpleasant and even dangerous side effects, including fevers of up to 104 degrees, internal swelling, loss of taste, fluid build-up in his feet, and a lot of fatigue. His kidneys also briefly failed, but have since returned to normal. Initially, Duane had to take 20 to 25 pills every morning and 10 to fifteen pills every evening. He also lost a lot of weight.

During his ordeal, Duane had the support of his wife, Lesley, who moved with him to New York to care for him.

“I can’t tell you how much my wife has done to contribute to my mental health during the process, and my recovery after the transplant,” says Draper. “She essentially gave up her life to take care of me. Caregivers never receive enough credit for their loving and tireless efforts in taking care of the ones they love.”

Lesley admits that being a caregiver was both physically and emotionally draining. Being away from home meant being away from her support system of family and friends.

She says that in retrospect, she should have sought support at Sloan-Kettering. “I was stubborn and I thought I could do it all by myself. And I did. But the emotional aftermath of taking all of that on was worse than the experience itself. You need support.”

During Duane’s transplant and recovery, Lesley was at the hospital every day. She couldn’t stay overnight because she was caring for the couple’s two dogs. Sometimes she would go home in the evening to tend to the dogs, and then turn around to head back to the hospital. At one point, she also found herself battling an infection for which she couldn’t seek medical care, because she couldn’t see a doctor without a referral from her regular provider.

Lesley advises other caregivers to make sure they take care of themselves. “It’s really important for the caregiver to get support,” she says. “Especially if you have to move out of town for care. Make sure you have medical facilities available for yourself.”

Lesley’s experience was incredibly isolating and difficult. Nonetheless, she says she would do it all again for Duane in a second. “The whole experience has brought us a lot closer. We totally depend on each other.”

Despite his wife’s support, having MDS was very isolating for Duane as well, as he had difficulty connecting with other patients or finding personal descriptions of patients’ experiences. He decided to start a weblog (blog) through caringbridge.org, which provides free websites to people undergoing significant changes in their health.

Duane found it to be very therapeutic to write his thoughts and provide updates and pictures for the people who cared about him. Friends and family members “came out of the woodwork” to post to his site. Especially during his time of near isolation leading up to his transplant, he was able to feel in touch with the outside world through his web network. Today, Duane keeps a book that he created from his blog posts and other materials from the website.

More recently, Duane has been able to make connections through AA&MDSIF. He and Lesley attended a conference in Boston, where they participated in a Survivors’ Celebration and met other people who are going through the stem cell transplant process. Duane assists other patients serving as a Peer Support Network volunteer for the Foundation.

The return to (near) normalcy

These days, Duane is back to near normalcy, with only a few lasting effects. The former golfer, kayaker, and snowshoer has had to slow down a bit due to neurotrophy in his feet. But he can travel again without wearing a mask and gloves, and he has returned to work in the technology industry. He is down to five pills in the morning and three at night, most of which are vitamins.  His blood counts, which had been further suppressed by immunosuppressant drugs, are back within normal range.

Duane has not yet met his donor, but he would like to. The registry through which he was matched allows donors and recipients to meet each other, but there is a waiting period and both people must sign a release. Duane has signed the release and is hoping that he will be able to tell his donor thank-you in person some day.

Duane’s advice to other people with MDS is to make sure they create their own support system, no matter what form it takes. For him it was a blog.

“A support system is crucial to keeping your attitude at a high level,” he says. “Attitude is everything. It helps you maintain normalcy in your life as you are subjected to being a pin cushion and being trapped in a hospital room.”

As for Lesley, she is thrilled that Duane has returned to health.

“Duane is the bravest man I know. He’s one of the good guys and everyone loves him.”

Since my stem cell transplant on January 29, 2010 (my new birthday), I returned to work as an Enterprise Client Manager, starting part-time and working into full-time, six months after my transplant.  Three years later, in the summer of 2013, I decided to retire, feeling a strong desire to spend more time with family and friends, and doing some traveling. Having gone through a life-threatening health scare makes you consider the really important things in life.  I decided life was too short to get “wrapped around the axle” with the stress of everyday corporate politics.

When I left the hospital, I was taking about 20 pills in the morning, and another 10-12 pills in the evening.  Finally, at the end of 2012, I was medication free.  From “Day Zero,” when I received my donor’s stem cells, to day +100, when I had outlasted the early threats of infection and graft versus host disease (GVHD), to the day I stopped all medications in late 2012, I survived multiple threats to my life. Life after MDS was, indeed, possible.

Being diagnosed in the intermediate-high risk category, and being told that a stem cell transplant was the only potentially curative therapy, my wife, Lesley, and I were scared, uncertain, but also hopeful. I can’t say enough for all the doctors and nurses that were part of my team at MSKCC (Memorial Sloan Kettering).  My check-ups were every six months.  At my July 2013 check-up, when the doctor told me my blood counts were good, and other lab results were positive, I said I would see him again in six months.  He told me, “Let’s make it 12 months,” and I knew that I had finally turned a big corner.

I am very fortunate to have had the opportunity to go through the rigors of a transplant, and I am forever thankful to all the healthcare professionals who helped me through this ordeal.  Lesley kept my spirit up and kept me from going down the “rabbit hole.”

Leading up to the transplant, the AA&MDSIF website was an invaluable educational resource.  Now, I am proud to say that I am a Support Connection volunteer, and I have spoken with numerous patients during their ordeals.  My wife and I have attended two regional conferences in the Boston area, and the interaction with others has been very beneficial.