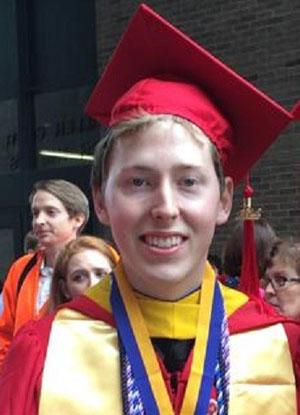 After graduating college, most young people are ready to take a break, go to the beach or maybe on a trip to Europe before getting serious again. Not two-time Matthew Debono Scholarship recipient Derek Cope. Derek embarked on a three-week study-abroad trip in June to Tanzania, where he visited hospitals, schools and orphanages to learn how health is delivered in Africa.

Derek lives life like there’s not a moment to waste. His diagnosis of aplastic anemia has a lot to do with that. In the fall of 2009, Derek was engaged in a challenging pre-med curriculum at Stony Brook University in New York when he started to feel extremely fatigued. He continued to push himself until one day he collapsed in his dormitory. Soon he was diagnosed with aplastic anemia and had to drop out of college and return home to Jessup, Maryland. He received treatment at Johns Hopkins University in Baltimore, where he went through an intense high-dose chemotherapy treatment to reboot his immune system. Taking ten different medications at one time and transfusion dependent, Derek missed a year of school.

“I navigated through this disease with the support of my family and friends, and the belief that I was stronger than the disease I was battling,” says Derek. “The best advice I can give to anyone with aplastic anemia is not to think “Why me?”, but to think, “You can’t beat me!”

Derek returned to Stony Brook University the next fall to continue his studies. Not only was he a strong student, he immersed himself in leadership positions and community service activities. Derek became involved in undergraduate student government and volunteered at the Stony Brook Pediatric Cancer Center. Through his leadership as president of the men’s soccer club, a multi-million dollar project to develop field space was initiated. Derek was also part of the team that hosted the first student-run bone marrow drive at his university. In a one-day span, 841 people were added to the registry.

By 2012, Derek’s blood counts returned to normal and he received his first Matthew Debono Scholarship award from AAMDSIF. Before receiving his second award in 2013, Derek was accepted into a one-year accelerated degree program in nursing. The curriculum included 69 academic credits and over 500 patient clinical hours.

“At times, this one year program seemed impossible with pharmacology and pathology exams, clinical rotations and 30-page term paper deadlines all occurring in the same week,” says Derek. However, it was at these times that I remembered my battle with aplastic anemia and know that impossible has never been an option for me. This is just one example of how my experience with my disease has changed me. It has given me the ability to find strength within myself to face my challenges head on and persevere to overcome them.”

Derek says his health is now “great”. He hopes to find work at the Stony Brook University Hospital and build his nursing skills. Because of his experience as a patient, he believes he understands how vulnerable patients feel, which is bound to make successful in his chosen field. He’d like to work on a critical care floor in an intensive care unit and plans to  eventually attend graduate school and earn an MBA so he can work in hospital administration.

“I will always be thankful for being a two-time recipient of the Matthew Debono Memorial Scholarship,” said Derek. “My aplastic anemia survival has taught me many things, but one fundamental lesson resonates with me daily. This lesson is that life is beautiful and that one should never take a second of it for granted. I hope my story helps others see the beauty in their lives and also recognize their own capacity for bravery.”