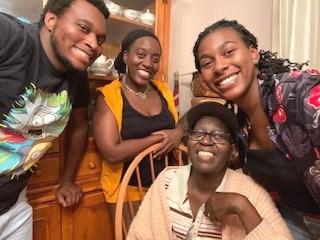 “Your blood counts are nearly nonexistent,” the doctor said.

Before this moment, Debra considered herself to be generally healthy, just tiring easily.  She assumed the cause was the big project at work on top of a host of family and volunteer activities, or perhaps issues with her blood pressure. It was autumn of 2017.

She decided to checked out at the urgent care thinking they would prescribe some pill and she would be ok.  Debra’s EKG was normal, but the blood work showed deficits of all three blood lines (white cells, red cells and platelets). Debra couldn’t understand the significance of having such low blood counts while the doctor asked her if she’d experienced any unusual bleeding or bruising. Meanwhile, the ambulance came---called to admit her quickly to inpatient services.

Her time in the hospital included a bone marrow biopsy and a host of tests resulting in a diagnosis of aplastic anemia. Like most adults, she had never heard the term “severe aplastic anemia," nor did she have any understanding of this rare disease.

Before long Debra started a course of horse ATG and cyclosporine.  The serum sickness required additional medication before the subsequent rounds of treatment.  A couple of weeks later, there were severe side effects resulting in painful joints, including pain on the soles of her feet when she put weight on them. She was hospitalized again to resolve the sickness.

After nearly four weeks in the hospital, Debra went home with regular blood level monitoring and continued treatment (cyclosporine and Promacta).  However, her kidneys were impacted by the treatment which required careful monitoring. As her condition improved over 6-8 months, the doctors reduced the dosages of medications. She returned to work for nearly a year until the blood counts showed a remarkable change.

Debra’s doctor referred her to Johns Hopkins for a second opinion.  She found Dr. Amy DeZern, and said, “This is exactly the doctor I needed.”  Dr. DeZern explained the treatment options, the risks and benefits of the options including bone marrow transplantation. She carefully responded to all Debra’s questions.
Having decided that a transplant was the best choice, Debra started preparing for the procedure until a different problem arose.  In the fall of 2019, she started having severe GI issues.  Because of the risks of bleeding due to aplastic anemia, the gastroenterologist tried all available non-invasive procedures.  On her third hospital admission with this issue, surgery was necessary even though it would be high risk due to the Aplastic Anemia.  Post-surgery, she suffered with a variety of issues, including infections and fevers.

Debra said of this low point, “I was a mental mess.”  The stress of waiting for a marrow match combined with the 45 days inpatient care while trying to recover from surgery complicated by severe aplastic anemia, was hard on her emotional health as well as her physical health.  It was nearly the end of 2019 by this point, more than two years after her first diagnosis.

Recovery from the GI procedure continued into 2020. Due to low neutrophils and blood counts, Debra “lived on her island” - limited visitors, staying home except for transfusions and medication appointments and wearing a mask.  By this time, Debra was having weekly transfusions of platelets and whole blood.  When her children discovered that neither of them could be a marrow match for her, the family recruited everyone they knew “to get swabbed” in hopes of finding a donor among their friends and relatives. Finally, on her late Mother’s birthday, in March 2020, an unrelated donor match was found, so the transplant was scheduled for May.  She cried, she said, because a donor was found, she had recovered from the GI surgery enough to consider the transplant, and the pandemic was not going to postpone the transplant. She couldn’t believe the transplant would finally happen!

As the date for the transplant approached, Debra relied on her family as well as her “Guardian Circle,” those faithful friends who could go for groceries and errands plus provide support, the ones who knew her at her lowest and stood by her.

Preparation for transplant was challenging.  She needed to find housing less than 40 minutes away from the hospital, so Debra and her husband applied for the hospital residence. Their stay was granted only two weeks before the procedure!

Only one caregiver was allowed to stay with her in the residence, so her husband and daughter took turns being with her.  She was not allowed any visitors at the residence due to the pandemic of 2020.

Of the transplant itself, Debra calls it, “anticlimactic.”  Even though the nurses sang the Happy Birthday song to make the event special, the transplant itself was a bag of cells, resembling all the other bags of blood she had. “I was alone in the hospital. I only heard a few songs on my playlist when the nurse came to disconnect the IV. Now we wait and pray it works.”. Even though her time in the hospital was only overnight, she stayed in the residence for a hundred days, coming home just before her birthday!

Until she began “feeling like herself” six months later, Debra endured fatigue every day. Due to nausea, it took some time for her appetite to return.  She was able to have her COVID-19 vaccine in April of 2021. One full year post-transplant, Dr. DeZern announced, “This is resolved!”  Throughout this journey, Debra thanked God for her recovery.

Now, Debra remarks, “It is truly a miracle, and a blessing, to be here right now.” She says she had so many ups and downs in the past three and a half years that each day is a real miracle.

Debra has advice for newly diagnosed patients. First, she wants them to know that they aren’t the only one with this rare condition.  It is be helpful to know others who have survived and thrived for years past diagnosis.

Even though immunosuppressive therapy didn’t work for her, the treatment works for many. As she looks back at her options after relapse, she says, “I chose life,” and the transplant gave her the opportunity for that life.  Even though treatment might be difficult, “You can do it!”

Debra also advises patience.  “The recovery from aplastic anemia treatment is slow---you have to be patient. But there could be and will be change.”

Finally, Debra says that AAMDSIF is her “go-to” resource for information about aplastic anemia and its treatments.  “When you’re in the middle of a life-threatening situation, there’s no time to sift through bad information, so go to the source that counts,” she says. “I am thankful to be connected to AAMDSIF.”