Feeling at home in the muddy water 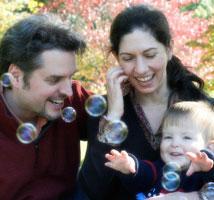 "May we live like the lotus, at home in the muddy water.”
Judith H. Lasater, PhD

In 2003, I had no idea who Judith Lasater was, and I was not at all at home in the “muddy water.”  I was a 5th grade teacher, I was hoping to start a family with my husband, and I had plans that in no way involved having a bone marrow failure disease.  And yet, in September that year, a series of doctor appointments led me to Georgetown University Hospital in Washington, DC and to the National Institutes of Health (NIH) in Bethesda, MD where I had bone marrow biopsies that confirmed a diagnosis of severe aplastic anemia.

After figuring out what that meant (in great part thanks to AA&MDSIF), and researching the options, my husband and I learned that I qualified for a study at the NIH.  My treatment there included horse ATG and cyclosporine along with a third drug that was later found not to be significantly impactful on treatment outcomes.

Four months into treatment, when I was no longer neutropenic (low number of white blood cells), we were out for lunch and I saw a sign for a yoga studio.  I picked up their schedule - just to look.  After all, it had been 13 years since my first and only yoga class.  As it happened, the studio offered a class called “gentle/restorative yoga” which sounded like something I could use.  The first time I went, the teacher asked if there was a part of our body we wanted to encourage or restore during class.  I said, “my immune system” and she replied, “We don’t have to do any special pose for that, that’s in the yoga.”  I started attending the class and fell in love with the space, the quiet, the opportunity to move my body again after all those months of mostly sitting or lying on a couch or in bed, and so, I kept going.

In June of 2004, I was officially declared to have “responded to treatment.”  By that time, I was attending about three classes a week and contemplating taking yoga teacher training. I took the plunge in September 2005 and entered the training program.  Since I finished that initial training, I’ve taught between one and five yoga classes per week.  I have focused my additional training on prenatal yoga, restorative yoga, and therapeutic yoga; areas that are near and dear to my heart.

It was my yoga practice and the calm it brought me that (along with tremendous support from my family, friends, and medical team) allowed me to clear the next hurdle life had in store for me – the challenge of creating the family my husband and I so dearly wanted. That story also ends well.  In August 2008, my husband and I brought our beloved son, Kostya, home from Russia.  He has brought great joy to our lives every day since. He is bright, sensitive, funny and loving. I am so grateful that I get to be his mom.

Today I feel good.  My red blood cell counts, white blood cell counts and platelets are all back in the normal ranges.  In fact, our friends have a hard time understanding that I was as sick as I was. I guess that is a good thing, and it gives me an opportunity to educate more people about bone marrow failure diseases. I stay involved in the “bone marrow failure world” through my participation on the Board of Directors of the AA&MDSIF, and through my membership on the Bone Marrow Failure Research Panel a body that is funded through Congressional mandate to promote research into treatments and, hopefully cures, for a variety of bone marrow failure diseases.

Aplastic anemia changed what I thought was the clear plan for my life – it muddied the waters.  In facing the challenge, I emerged from my illness with new skills for dealing with those muddy waters that life inevitably places in front of us all.

Debby Cook is a member of the AA&MDS Board of Directors.