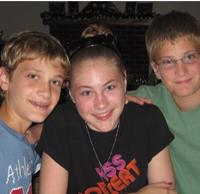 Barbara Manley found herself living every parent’s nightmare the night her two-year-old son, David, was admitted to the hospital for increasingly serious bruising. “The doctor said it’s either aplastic anemia or leukemia, and you’d better pray for leukemia. I knew leukemia was bad, so that was horrifying.” By the time of his diagnosis of aplastic anemia in January, 2002, David was dangerously close to spontaneous hemorrhaging. A blood transfusion provided some temporary respite while the family decided what to do.

Faced with an illness she had never heard of before, Barbara went online. Though many websites provided little useful information, Barbara found hope and inspiration in the AAMDSIF website. AAMDSIF connected her and her husband with other families and sent them information pamphlets that helped them understand the illness better. The president of AAMDSIF at that time was Marilyn Baker who spoke with Barbara about her son’s illness. “She was able to share stories of people doing really well. That’s all we could hold onto at the time.”

Neither of David’s parents were matches for a bone marrow transplant, nor were his twin brother or six-year-old sister. However, the hospital where David was diagnosed did not think an anti-thymocyte globulin (ATG) treatment would be successful, leaving the family with little hope. Barbara and her husband sought out a doctor at a different hospital who thought David could respond well to ATG. After the ATG treatment, his bone marrow showed signs of recovery by April, and he has been in remission since December 2002.

Despite the rapid and successful outcome, ATG treatment was very difficult on Barbara’s family. She was able to take paid leave from her job as a middle school math teacher, thanks to several very supportive administrators, but her husband had to continue to work full time. When David needed hospitalization, Barbara would stay with him at the hospital during the week, then switch off on the weekends with her husband.

Barbara felt a great deal of isolation throughout the ordeal. “One huge frustration with aplastic anemia is that no one has heard of it. Some people would ask what it was, but some would just dismiss it, saying, ‘Oh, he just needs more iron.’ So we tried telling people it’s like leukemia, but it’s really not cancer.”

Friends and family members helped out when they could. Some would take care of David’s twin brother, Nicholas, while David had treatments or transfusions. And the daycare provider would do her best to keep Nicholas isolated from other children so that he wouldn’t be exposed to any infectious illnesses that could be passed on to David with his weakened immune system.

Barbara learned a great deal about hospitals and the medical profession in general from David’s illness. She learned to be assertive and ask a lot of questions on behalf of her young son. For example, she quickly learned to ask for a pediatric phlebotomist when they needed to draw David’s blood. And she learned to ask for an attending physician rather than a resident to make important decisions regarding David’s care. Barbara also carefully monitored David’s medications and twice caught a mistake when the hospital mixed up dosage based on his weight in kilograms rather than pounds.

“We learned to question a lot and gained an understanding of why some decisions were being made so that we could be informed about alternatives. I asked doctors directly and I was following a couple of different blogs that helped me ask the right questions. You have to be an advocate for your kid.”

One of the greatest challenges for Barbara was meeting the needs of her other two children while taking care of David. Despite the daycare provider’s attempts to keep Nicholas isolated, he was exposed to chicken pox at one point, so he wasn’t allowed to visit his brother in the hospital for ten days. After that, the family increased their reliance on friends and family members to take care of him. “Nicholas probably had the hardest time, because each day was different for him.”

Barbara’s daughter, Elizabeth, was in a large second grade class. “We wanted her to have a normal school experience, but at the same time we really needed to keep her healthy. We let her teachers know to try to keep her away from other kids who might be ill.”

Barbara and her husband found that they had to focus most of their attention on David’s healthcare. They waited until he had gone into remission to bring the focus back to the emotional needs of their other children. “Parents tend to feel a lot of guilt about other children. However, you do the best you can given the situation. David’s life or death situation demanded our attention. After his life was out of danger, we focused on the other issues. You have to prioritize, so you can’t feel that guilt.”

Throughout David’s entire illness, David’s parents stayed as positive as they could for his sake. Because of David’s young age, he only knew what his parents told him. “He looked forward to going into the city to the clinic. He had a positive outlook, because the way we presented it was the only perspective he had, so we kept a positive outlook.”

Barbara and her husband are thankful that David went through his illness at such a young age since he was unable to understand the seriousness of his condition. Today, David is a healthy teenager who hardly remembers his struggle with aplastic anemia ten years ago.

David is now 16 and his health remains in good standing. He is still enjoying basketball and is now working on getting his driver's license. His blood counts continue to be monitored yearly, and this will likely continue throughout his life. There are no lingering side effects that we can see at this point in time.