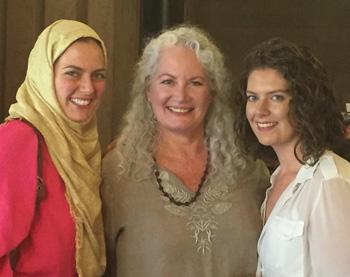 I was just past my 19th birthday when my family and I realized that something was severely wrong with my health. Throughout high school I was always fatigued, and bruised very easily. I also experienced what I now know as petechiae – little red dots all over my body caused by bleeding into the skin due to low platelet counts. After I got to know what the symptoms of aplastic anemia were, I later realized that I had at least some degree of the deficiency for about two years before I was diagnosed in 2008.

As happens with many other patients, we first knew something wasn’t right when blood work from a routine physical showed significantly low blood cell counts. The results were severe enough for my doctors’ office to call to tell me to get to a hospital emergency room for a blood transfusion right away. After my first blood transfusion, I saw a hematologist at Prince William County Hospital in Northern Virginia, and immediately had my first bone marrow biopsy.

After learning my diagnosis, I began to research aplastic anemia to get a better understanding of the disease. This is when I came across the Aplastic Anemia and MDS International Foundation. I signed up to receive specific and general information and email newsletters. It was nice to be able to learn things at home that I could take to clarify with my doctors. Although I no longer live with aplastic anemia, I still receive the AAMDSIF newsletters and enjoy reading stories from other aplastic anemia survivors and wanted to contribute my own story.

The hematology team at PWC Hospital wasn’t sure what to make of my biopsy results. In March of 2008, I was referred to the Oncology Center at Georgetown University, in Washington D.C. where I was diagnosed with aplastic anemia. I was treated with high does of cyclosporine and multiple transfusions to help maintain steady blood cell counts, and later received two separate doses of anti-thymocyte globulin (ATG) over a period of two years. The ATG treatments helped maintain somewhat normal blood cell counts for about six months, but they declined again. At this point, Georgetown University had exhausted all options for my condition and referred me to the National Institutes of Health (NIH) in Bethesda, Maryland in early 2010.

I was set up with a team at NIH, and began a regimen of medication that again included cyclosporine. After many tests, it was decided that I was a good candidate for a stem cell transplant. My sister was tested and found to be a fully matched donor. After about a year of preparation, I received my new stem cells on June 8, 2011, almost 5 years ago.

After an inpatient stay of three weeks, I was discharged but had to live nearby in Maryland for about two months. I was evaluated every day for the first few months and once my follow-up appointments changed to once weekly, I was able to move back home to Nokesville, Virginia, about an hour and a half from NIH. Around one year after receiving my stem cell transplant, we were notified that my sister’s stem cells had successfully engrafted -- in layman’s terms, I was cured of aplastic anemia!

I was lucky to experience only minor side effects from the transplant during my recovery period. Besides the expected severe fatigue, I had one very minor case of graft vs. host disease of the skin that was easily cured with high doses of prednisone, and I also had dry eyes, which later went away. The only other side effects that I experienced were caused by the multiple medications that I was required to take to help the engraftment of the stem cells.

In April of 2014, I started my current job with One Degree Capital. Recently, in a morning meeting, our CEO Rodney Loges, asked for input from the team on worthy causes and charities that our company might direct charitable contributions. I immediately spoke up and suggested the Aplastic Anemia & MDS International Foundation. I explained that the foundation really helped my family and I through a tough a critical time in our lives. Because of this, I am very pleased and thankful that One Degree Capital has made a contribution to them on behalf of me. It was a great feeling to have the support and be able to give back!