Ashley Oakes – Blessed to Have Her Son, Her Family, and Her Life | Aplastic Anemia & MDS International Foundation
Skip to main content

Ashley Oakes – Blessed to Have Her Son, Her Family, and Her Life 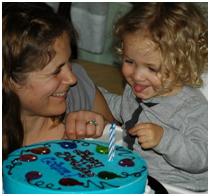 It has been two-and-a-half years since being diagnosed with aplastic anemia. In September 2010, my husband, Scott, and I moved home to Vancouver, British Columbia from Calgary, Alberta where we had been living for the previous three years. I was six months pregnant and so excited to be going back to the city where all our family lived to share this wonderful time with them. We moved into a little house a few blocks from my mom and settled in to await the arrival of our little one. A few weeks after we moved, it was Canadian Thanksgiving and we had my whole family over for a feast. Everyone was remarking at how pale I was, but I insisted I was feeling fine! I was a little tired, often out of breath, and it was difficult to go upstairs without needing a break. My assumption was that my fatigue was caused by my pregnancy and the baby must just be pushing on my lungs.

The day after the dinner, I dropped a piece of Tupperware on my foot and it left a very large bruise. I went to see my midwife that afternoon for our regular visit and she asked me what happened to my foot. So I told her and we had a good laugh over what a peach I was - always so quick to bruise! Two weeks went by and I was feeling more and more tired. At my next appointment, my midwife noticed my foot was still bruised. I also pointed out a rash that had formed on my legs. She sent me for a blood test that afternoon. I went for the blood test at 2 p.m. and at 5 p.m. my phone rang. It was the midwife advising me to get to the hospital right away; she would meet me there. She told me that something was wrong with my blood levels and that I should pack for at least three days in the hospital and that we would be delivering the baby right away. I was terrified! I called my husband and he rushed home from work and got us to Lions Gate Hospital in Vancouver.

We met the midwife in the maternity ward and she rushed us into a room. We were introduced to our nurse and advised that she would be our private nurse in order to avoid infecting me with anything. I still had no idea what was happening at this point. Within an hour of arriving at the hospital, we were introduced to an oncologist and an internal medicine specialist and were told they suspected I had leukemia. I was told that I was pancytopenic (red, white blood cells, and platelets are lower than normal) and that they would need to do a bone marrow biopsy first thing in the morning. I was given two units of platelets and red cells that night. Upon admission to the hospital, my blood counts were: platelets 9, hemoglobin 76, white blood count 2, neutrophils 0.4.

The next morning, the bone marrow biopsy was done and a number of tests were performed to ensure our baby was well. They would perform a c-section as soon as we had a diagnosis. It took another 36 hours to get the results of the biopsy, and once the results were in, I was diagnosed with severe aplastic anemia. That day I was given multiple transfusions to prepare for the c-section. They successfully delivered my beautiful son, Cohen, on October 30, 2010. He was four pounds, 15 oz and in really good condition for being born prematurely.

He was transferred to the neonatal intensive care unit (NICU) and I was transferred to the post-partum ward with strict instructions to not have too many guests and to keep my mask on anytime anyone was in the room or anytime I left the room. I was also told that I would be transferred to Vancouver General Hospital (VGH) within three days to receive treatment. VGH didn’t have a NICU so I would be separated from my son with limited access during my treatment. I was devastated to say the least and slipping into a deep sadness. Nothing was going as planned and I felt like the ground was falling out from under me.

On November 4, I transferred to Vancouver General Hospital to the Leukemia/Bone Marrow Transplant ward. At 10:30 p.m., the ‘vampires’ arrived (phlebotomist) and took 23 vials of blood for testing. I also received a second bone marrow biopsy. The next morning, I had a Hickman line (catheter inserted into the chest for receiving IV medications and taking of blood) inserted and finally met my hematologist. I was told I would be receiving horse ATG followed by cyclosporine. As I was over 30 and my sister wasn’t a bone marrow match they preferred to try immune suppression treatment first. My ATG treatment started three days later. I had terrible reactions to it and it was a daily struggle for them to manage the complementary therapies – steroids, Benadryl®, and Ativan® - to get me through each round of treatment. After a week and a half at VGH and two-and-a-half weeks total in the hospital, I was finally allowed to go home and began outpatient therapy every other day.

Cohen was still in neonatal intensive care after I was discharged and so began my daily vigil at Lions Gate. We finally brought him home on November 29. Thankfully, we had moved to Vancouver when we did, as it was with the support of our families that we managed to juggle a newborn, outpatient treatment, and my husband having to be at work. I knew I had to stay away from crowds and so we didn’t often leave the house except to go for short walks when I had the energy to manage it. Our families did the grocery shopping for us and looked after Cohen while I was at treatment.

Slowly things began to improve. My last transfusion was just before New Years Eve 2010. The Hickman line was removed right before my 32nd birthday at the end of January. By Spring 2011, I was only in treatment once every two weeks and by the summer I was going for weekly blood tests at the lab close to our home. By Cohen’s first birthday in October, I was starting to feel almost normal. That fall, I joined Team In Training and began training for my first half marathon which I ran in May 2012 and raised $4,000 in support of the Leukemia & Lymphoma Society. March 2012 saw me go back to work in my career as a professional fundraiser and last summer, I competed in my first downhill mountain bike race.

Just before Cohen’s second birthday in October 2012, I was declared in remission. Now, life is truly normal again! I feel awesome! I am fit and healthy and have a beautiful family. I know I am very blessed.

I would say my friends and family got me through this, especially Scott and Cohen. Scott was a rock throughout the whole ordeal. Because I was so tired all the time, he took on a majority of the late night feedings, and generally kept the house in order while I recovered. When I was still in the hospital, and Cohen was in the hospital across town, Scott slept at Vancouver General Hospital with me, got up and went to work, came back to VGH at lunch, went back to work, came back at the end of the day and would pick up anything I wanted or needed to go over to Lions Gate (where Cohen was) and would then head over there for the whole evening to tend to Cohen.

Being able to come home from treatment and see my beautiful, little baby boy made me feel like we were almost a normal family. Also, by nature, I am a pretty competitive person and I refused to allow myself to think that I wouldn’t be able to do the things I loved anymore, like mountain biking and running. I started off carefully. I would walk up the hill to get my blood test done, then I started walking up the hill while pushing the stroller. Eventually the hill wasn’t so hard to walk. I applied that same principle to everything that felt challenging or overwhelming. I would start off small and then push myself a bit further the next time.

Cohen is great now. He is running and talking and is so sweet, gentle, and happy. He will be starting pre-school in September and is excited to be going to school. We are very happy to say that he experienced no setbacks or health concerns as a result of the pregnancy or early delivery. Aplastic anemia is in my thoughts every day, but it no longer rules my world. I still go for monthly blood tests, and see my hematologist twice a year. I know that there is a risk of it coming back and that I must remain vigilant in going for regular tests and check-ups. That is part of my life and I accept it. I feel like a survivor and have a better perspective on what’s important in life. I look forward to many amazing adventures with my husband and son and enjoying each day as it comes.

In July 2013, I had been off cyclosporine for about ten months and was on a holiday in Ontario with my son, Cohen, and niece, when I got a small scratch that wouldn't stop bleeding. I knew something wasn't quite right and so when I returned home to Vancouver I went for a blood test. That test revealed what I had feared. My platelets had dropped from normal levels for me of about 155 down to about 100. In addition, my hemoglobin was low, as well as my netrophils and white blood cells. Nothing was truly alarmingly low, but it was a reverse of where I had been a month earlier. An appointment was made with my hematologist and I was sent for bi-weekly blood tests.

At my appointment it was decided to put me back on cyclosporine to see if that might help things come back up. After about six weeks of this, it became obvious cyclosporine alone wasn't going to work and so I was readmitted to the hospital for another round of ATG (equine), which is what I had in 2010. In late September 2013, I was readmitted to Vancouver General Hospital to start the process all over again. I had to quit my job, and my husband (Scott), son and I moved in with my in-laws for what looked to be a long road ahead. ATG was harder on me the second time and my recovery post treatment was much slower. I was an outpatient for seven months before I could finally have my Hickman line removed. It took nearly a year for me to start feeling normal again.

When I first relapsed I was just about to join the board of the Aplastic Anemia and Myelodysplasia Association of Canada (AAMAC), but put off my nomination to the following year. I am now thrilled to say that I am Vice Chair of AAMAC and I am looking forward to attending the San Francisco Patient and Family Conference in July.

Never one to sit still, while still working towards my recovery I have participated in the Tough Mudder (10-12 mile team obstacle course), begun running and mountain biking again, and started my own home-based consulting business. We have now moved to the town of Squamish, British Columbia to be closer to the mountains we love.

I continue to take cyclosporine and have recently achieved normal results across all levels of my blood. It's been a roller coaster ride, but we have weathered the storm once again and are looking forward to a health-filled future.