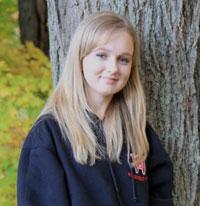 In March, Annette had the honor of singing a solo for her high school senior show. She chose to sing “I Was Here”, a song recorded by the group Lady Antebellum and others. The lyrics for the chorus start with “I wanna do something that matters – say something different – something that sets the whole world on its ear – I wanna do something better with the time I’ve been given.” She considers it her personal anthem. Nineteen-year-old Annette has overcome several obstacles since she was diagnosed as a toddler with MDS and had a bone marrow transplant at age two-and-a-half. Her challenges have only served to make her more determined to become a nurse. “I want to bring them the faith, love, and help that I was so lucky to get and what makes me a survivor,” she says.

In the fall, Annette will be starting at Curry College in Massachusetts where she has been admitted into the nursing school. The Wakefield, Massachusetts native was a strong student in high school and involved in several activities including marching band, drama club, and jazz band where she played flute. She sang in her school chorus the last three years of high school and served on the Boston Children’s Hospital Teen Advisory Committee which advocates for the unique needs of teen patients, specifically the transition from pediatric to adult health care. This summer she is volunteering at Boston Children’s on a surgical floor. She accomplished all that she did in high school despite having two open heart surgeries in her freshman and sophomore years to remove a benign heart tumor. “The tumor was found during my annual post-BMT cardiology check-up,” she says. “I think of the MDS and resulting transplant as a blessing because the tumor may not have been found in time otherwise.” In June, Annette’s BMT donor traveled from England to celebrate her well-earned high school graduation with her. This is her first Debono scholarship.

In Her Own Words
It's not a scar.  It’s my story. It looks like it has wings and is shaped like a butterfly. I think of it as my symbol of rebirth, a second chance after my diagnosis of myelodysplastic syndromes (MDS) when I was 13 months old. Of all my scars, the butterfly scar on my chest is my favorite because it has that special meaning. It symbolizes where I’ve been and where I am going. I want to be a nurse. I got my butterfly scar from the central venous line for my matched, unrelated bone marrow transplant (BMT) that I received at the age of two and one-half. After that, I got other scars on my knees and hips from orthopedic surgeries. Another scar is five inches long, runs down the center of my chest, and is from two open-heart surgeries.

My scars are symbols and are significant to my personal identity. I embrace them because they illustrate who I am, how far I’ve come, and my ability to persevere and feel compassion for other people. One side effect of the chemotherapy and total-body radiation for my bone marrow transplant that I had as a toddler, while my brain was still rapidly developing, is my learning disability that affects my brain’s processing speed and learning new, complex material. Because of it, I need to work harder in school, especially on math and science. Despite this, I’ve always been motivated to do the best I possibly can and to succeed in school and reach my goals. My reward has been the increased confidence and satisfaction that comes from overcoming a challenge. I accomplish anything I set my mind to and that will carry over to college. I won’t give up. I’ll push myself.