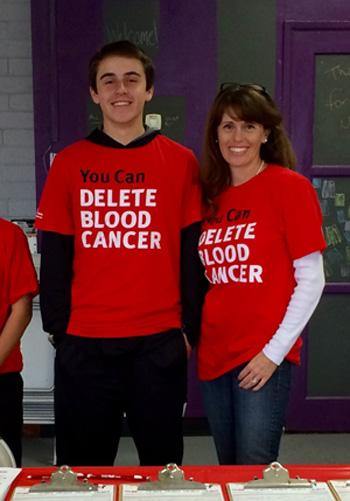 My husband David’s journey with MDS began in April 2014, when it was discovered almost by chance while we were on vacation. David was bitten by a brown recluse spider and had a very severe reaction to it. He had to be hospitalized, which is when he got his first blood test in years. The doctor noted that his blood counts were low and, while he didn’t rule out that the spider bite might have affected the counts, there was a possibility of myelodysplasia.

It was a ten-day hospitalization, during which he was also under the care of a rheumatologist because his joints were severely affected by the spider venom. When David’s blood counts did not improve, the doctor was certain there were other factors involved so she referred us to a hematologist at the Moores Cancer Center at University of California, San Diego. They did a bone marrow biopsy, which led to the official diagnosis of intermediate MDS, as defined by the revised International Prognostic Scoring System, also known as IPSS-R. David was only 52 at the time, younger than the average age of newly diagnosed patients.

Looking back, we began to recognize some of the clues that his condition had been going on for some time – like getting sick more often than us and taking longer to get over colds.

Next, the hematologist explained the three FDA approved drugs, azacitidine, decitabine, and lenalidomide – noting of course that the latter was on for the 5q deletion category of MDS, which David did not have – and he was put on azacitidine. We also learned a clinical study of oral azacitidine – taken by mouth, in pill form. We were interested in this but it meant another biopsy to see if prospective patients are qualified for the trial. However, because he remained in high-risk status he wasn’t qualified, as his blast count had actually increased. We thought things over for a month or two, but knew we had to get started.

In October of 2014 David began the treatment, getting the subcutaneous shots instead of intravenous administration – he was on the treatment cycle of seven days of 2 shots per day, and then three weeks of no shots. But he responded well to the treatment, and after about three months on azacitidine, he no longer needed transfusions.

A search for a stem cell donor had been started prior to this treatment. Because David is multiethnic, no matches were immediately found, so he was to have a stem cell transplant from cord blood {ADD statement about difference of cord blood and matched donor). Then right at this point a matched donor was found although was not available until August. Still we decided to wait for this matched donor transplant.

But then the donor fell through, and this was a disappointment. So we decided to go ahead the with cord blood transplant as we originally had planned. In September 2015, my husband had the stem cell transplant from cord blood, which was of course preceded by 3 days of preparation by chemotherapy, and then followed by radiation treatment. The actual transplant occurred at UCSD on September 25.

David was discharged and came home on October 20, and although it took a while for him to recover some significant side effects of treatment that began in the hospital and during his recuperation at home. We are watching things closely with subsequent biopsies and while results are encouraging, we’re being cautious as results still show what they are calling ‘residual disease’.

Right from the start of David’s diagnosis, we found AAMDSIF and have been getting information from the Foundation ever since. We saw an announcement that AAMDSIF was connecting with the National Council of Churches (NCC) to promote swabbing drives to tie in with Aplastic Anemia and MDS Awareness Week.

So I discussed it with our son Connor, who is 14, and he liked the idea of doing a swabbing drive through our church. He understands the importance of helping build the pool of potential donors, particularly because bone marrow failure has struck our family before. My husband’s mother passed away from aplastic anemia while waiting for a match that never came, so we are committed to doing what we can to help the community of patients like us.

The swab drive was held at Connor’s church school. He passed out flyers, spoke at church about it, and publicized it at school. He worked with the school administration so that not only students, but also the students’ families are aware of his drive. Connor is now ensuring that the entire congregation and local school community knows that he’s standing up to make a difference for bone marrow patients everywhere. “It was my decision to hold the drive,” says Connor. “I’m speaking about it in school and church about it.”