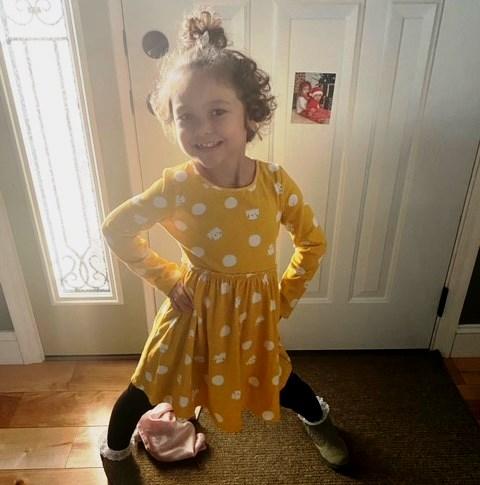 Alayna was a toddler when she was diagnosed with severe aplastic anemia.  The previous story described the journey of diagnosis and treatment with a bone marrow transplant.

Today, Alayna is attending preschool, three days a week. She has had no major “hiccups,” her mom said, after the transplant in September 2019. She’s even doing so well, a year later, that she doesn’t need any more post-transplant biopsies!

When does a mom quit worrying? Alayna’s mom, Ashley, continues to worry, especially during this time of the pandemic.  All the prognosis from the medical team is very positive in every way, so she is starting to breathe a little easier.

When Alayna had an opportunity to receive a “Make-A-Wish” gift, she had planned on going to Disney.  As the pandemic started, the family knew that would have to be postponed at least a year.

They discussed options with Alayna.  The animated characters, Max and Ruby, caught her eye as they went on camping adventures during their television series. Finally Alayna decided: she wanted a purple camper!

Even though the camper isn’t purple, it comes with complete kitchen and facilities, in addition to the bunks for sleeping.  Now that it’s cold in Ohio, they will wait until the weather is a little warmer to test it out beyond the back yard!  The family has had pizza and a family “sleepover” in it already.

Ashley is working on “paying it forward.” She connected with another mother of a pediatric patient, and so she’s organizing Christmas presents for the pediatric patient and sibling.  She hopes to continue to helping others through the challenges she had as a mother of an aplastic anemia patient, from diagnosis through treatment. This includes her new book, called AlaynaStrong.

What advice does Ashley share with other parents in a similar situation?  “Take it day by day,” she says.  Try not to stress about the future as well, she suggests.  But here’s what she says is most important, “Celebrate each victory, no matter how small!” 2020 has been rough, she says, but she is thankful for everyone’s health!