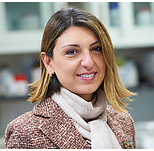 Progress in understanding the etiology and effective treatment of MDS is currently hampered by the scarcity of tools to study this disease. Our goal is to harness cutting-edge human pluripotent stem cell and genetic engineering technologies to establish new models of an MDS subset characterized by loss of chromosome 7 material and use them as a novel platform to identify genes on chromosome 7 that are critical for this disease. These models should provide a powerful resource to the MDS community to investigate the cell biology, molecular pathogenesis and genetic basis of MDS, identify new therapeutic targets and perform drug screens.

Read more about this study.

Myelodysplastic syndrome (MDS) is the most common form of bone marrow failure in adults.  Although a relatively common disease, we currently understand little about its etiology and we lack good models for its study. My laboratory is using a recent breakthrough technology which enables us to take cells from any individual and convert them into pluripotent stem cells, called induced pluripotent stem cells (iPSCs). These cells still contain all the genetic information of the individual they were derived from, including allpossible genetic abnormalities that may have caused or predisposed to disease. By using iPSCs derived from patient cells, we can develop new models of human disease. My laboratory was the first to generate iPSCs from patients with MDS and develop a “disease-in-a-dish” model of this syndrome.

In the project funded by the AA&MDS IF research grant we conducted the first studies to characterize the potential of blood formation of these cells and to compare it with this of normal cells derived from the same patients. These data demonstrate that our model indeed mimics hallmark characteristics of the disease and help us establish assays that we are now using to ask important questions about the genetic causes of MDS. This work will also provide us with a platform that we can use more generally in the future to study chromosomal defects implicated in myelodysplastic syndromes.

Induced pluripotent stem cells (iPSCs) -- adult cells reprogrammed back to an embryonic stem cell-like state--may better model the genetic contributions to each patient's particular disease. In a process called cellular reprogramming, researchers at Icahn School of Medicine at Mount Sinai have taken mature blood cells from patients with myelodysplastic syndrome (MDS) and reprogrammed them back into iPSCs to study the genetic origins of this rare blood cancer. The results appear in an upcoming issue of Nature Biotechnology.

In MDS, genetic mutations in the bone marrow stem cell cause the number and quality of blood-forming cells to decline irreversibly, further impairing blood production. Patients with MDS can develop severe anemia and in some cases leukemia also known as AML. But which genetic mutations are the critical ones causing this disease?

In this study, researchers took cells from patients with blood cancer MDS and turned them into stem cells to study the deletions of human chromosome 7 often associated with this disease.

"With this approach, we were able to pinpoint a region on chromosome 7 that is critical and were able to identify candidate genes residing there that may cause this disease," said lead researcher Eirini Papapetrou, MD, PhD, Department of Oncological Sciences, Icahn School of Medicine at Mount Sinai.

Chromosomal deletions are difficult to study with existing tools because they contain a large number of genes, making it hard to pinpoint the critical ones causing cancer. Chromosome 7 deletion is a characteristic cellular abnormality in MDS and is well-recognized for decades as a marker of unfavorable prognosis. However, the role of this deletion in the development of the disease remained unclear going into this study.

Understanding the role of specific chromosomal deletions in cancers requires determining if a deletion has observable consequences as well as identifying which specific genetic elements are critically lost. Researchers used cellular reprogramming and genome engineering to dissect the loss of chromosome 7. The methods used in this study for engineering deletions can enable studies of the consequences of alterations in genes in human cells.

"Genetic engineering of human stem cells has not been used for disease-associated genomic deletions," said Dr. Papapetrou. "This work sheds new light on how blood cancer develops and also provides a new approach that can be used to study chromosomal deletions associated with a variety of human cancers, neurological and developmental diseases."

Reprogramming MDS cells could provide a powerful tool to dissect the architecture and evolution of this disease and to link the genetic make-up of MDS cells to characteristics and traits of these cells. Further dissecting the MDS stem cells at the molecular level could provide insights into the origins and development of MDS and other blood cancers. Moreover, this work could provide a platform to test and discover new treatments for these diseases.

Loss of genetic material from chromosome 7 (del7q) is a frequent karyotypic abnormality in MDS that is associated with poor prognosis and increased risk of progression to leukemia. Although this abnormality has been recognized since decades, we still do not understand the mechanism and the specific genes implicated. One reason for this is that chromosomal deletions are much harder to study than gene mutations because a large number of genes are included in the deletion and significant differences in the organization of chromosomes between species hamper their modeling in the mouse. To overcome these obstacles, we took advantage of cutting-edge stem cell and chromosome engineering technologies to model this deletion in human pluripotent stem cells. Specifically, we derived induced pluripotent stem cells (iPSCs) with del(7q) from the bone marrow of MDS patients. In parallel, we engineered chr7q deletions of various lengths in normal iPSCs through chromosome engineering technologies. Thus we were able to show that the culprit is reduced gene dosage (haploinsufficiency) and to pinpoint candidate genes on chr7q that may be critical to the pathogenesis of MDS.

In this study we established the first (and currently the only existing) iPSC lines from patients with MDS and developed the first iPSC model of MDS. This model opens a new research avenue for the study of MDS. It should find broader use in basic research into the pathogenesis of MDS, as well as in translational studies to guide clinical decision-making. These iPSC lines can also provide a new platform for drug screens to discover new compounds or repurpose existing ones, as well as in personalized medicine approaches. This work also established for the first time technologies for engineering large-scale chromosomal deletions in human cells that can be applied to the study of other disease-associated chromosomal deletions.