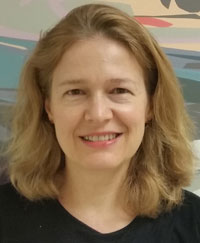 Summary
Our study involves the analysis of normal and abnormal cells in the bone marrow of patients with Paroxysmal Nocturnal Hemoglobinuria (PNH). In this condition, due to a gene mutation, some bone marrow cells and their progeny in the blood lack an important cell surface component that functions as an anchor for other proteins, some of which attach to blood cells and protect them from destruction by complement, part our immune system. The result of this deficiency is a breakdown of red cells. If large quantities of red cells are destroyed, people become very tired, or have pain in the belly, head or when swallowing, or develop blood clots. The cause of the gene mutation is unknown. Some patients with other conditions, such as aplastic anemia (AA, a disease where marrow stops producing blood cells), or myelodysplasia (MDS, a disease associated with a tendency to transform into leukemia), may develop PNH. It is not clear what makes this change occur, and when it happens, patient may not even be aware of it, because patients with AA and MDS usually have few cells of the PNH type. However, over time, the symptoms could worsen due to an increase in the number of affected cells, and patients may need treatment to prevent red cell destruction.

Tests for PNH
These tests include a complete blood count (the number of cells in blood), and tests assessing red cell breakdown. For detecting PNH, doctors use an instrument called flow cytometer, which detects and counts cells with anchor protein deficiencies on the surface of cells in blood. If PNH is present, it is important to know how many cells are affected and to what degree (they can be partially or completely abnormal), because patients symptoms vary according to these parameters. A new reagent, called FLAER, allows the detection of cells missing the critical anchor proteins in PNH patients and is widely used in the detection and counting of abnormal cells in blood.

Why study the marrow in patients with PNH?
In many patients with AA and MDS, we often detect PNH cells in the blood. In these patients, we plan to determine which marrow cells and how severe, they are affected. Using the power of flow cytometer in recognizing distinctive types of cells, we will use FLAER to study the presence and distribution of anchor proteins in the various populations of cells residing in the human marrow, in normal individuals and in patients with PNH. This information should provide unique insights into the biology of PNH and may help diagnosing PNH in patients with cytopenias in whom marrows are examined for diagnostic purposes without a clinical suspicion of PNH. Furthermore, since cells in both, normal or diseased marrows actively proliferate and many naturally die, we plan to measure the fraction of normal and PNH cells undergoing cell division and cell death in the same marrow. We expect that this information would allow us to predict changes in PNH clonal size over time that should have clinical relevance.

PNH is a hematologic condition caused by a genetic defect occurring in early, unspecialized cells called stem cells, located in the bone marrow. These stem cells, “mothers of all cells”, divide and generate daughter cells (called progenitors cells) which in turn, mature into functional cells that circulate in our blood: neutrophils, red cells, platelets, monocytes and lymphocytes. Therefore, the cells deriving from a sick stem cell such as a PNH cell, carry the PNH genetic defect and are found both in the bone marrow and blood. We can identify these PNH cells by flow cytometric analysis, because they lack or show decreased expression on their surface, of certain markers. Among different markers used for PNH testing, FLAER proved superior to most other markers, and has been used in peripheral blood analysis.

In order to have a reference, we initially studied FLAER binding to normal BM cells, and showed that FLAER receptors are expressed in all white BM cells, and at all stages of maturation.  We then studied cells in bone marrows from patients with aplastic anemia and myelodysplastic syndromes, two diseases in which the body produces an insufficient number of blood cells. Many of these patients also have detectable PNH cells in the peripheral blood, for which they are tested routinely in clinical practice. have shown that all BM white cells (including the progenitors of the mature cells) show defective FLAER binding. Red cell precursors showed deficient or absent CD55 and CD59, on their surface, similar to the mature red cells in blood.

Because the gold standard for PNH detection is the peripheral blood, we tested how our bone marrow results correlate with peripheral blood values that were pre-determined. Our data show that the PNH clone size measured in BM mature neutrophils, monocytes and immature (nucleated) red cells correlates well with that in PB neutrophils.  The clone size among mature lymphocytes is smaller than in other white cells, most likely due to differences in cell life span.

Bone marrow biopsies and aspiration are often performed to investigate the cause of low blood counts (cytopenias). In these marrows, we have shown that flow cytometric analysis of BM cells using markers routinely used for diagnosis purposes, can identify defects consistent with the presence of PNH. We then confirmed our findings with testing these marrows with specific markers for PNH (FLAER, CD55, CD59 and other surface markers that need the presence of the anchor protein in order to be expressed on cell surfaces.

The Flow cytometric analysis was performed on cells from anticoagulated bone marrow samples that were exposed to antibodies and FLAER after lysing of red blood cells.

Although the standard method of diagnosing PNH is flow cytometric analysis of the peripheral blood, we have proven that bone marrow is an adequate source of cells for the laboratory diagnosis of PNH.