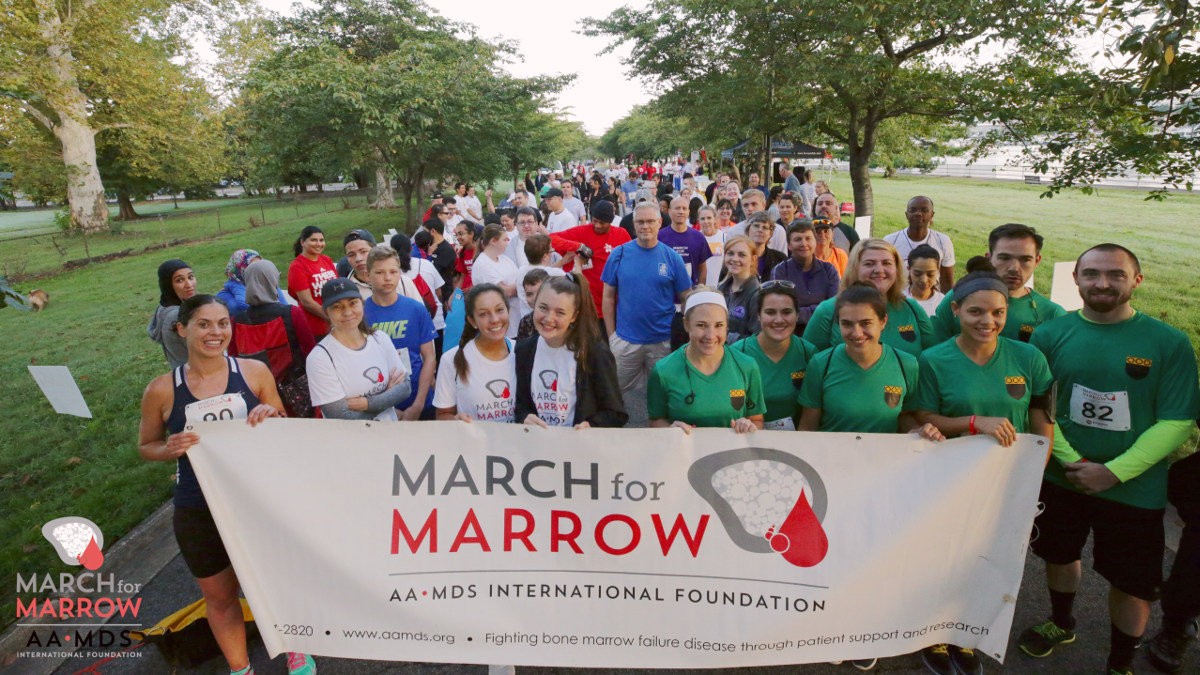 This section answers the most frequently asked questions about bone marrow failure disease.

What is aplastic anemia?

Aplastic anemia happens when your bone marrow stops making enough blood-forming stem cells. Most experts believe aplastic anemia occurs because your immune system attacks and kills your stem cells in your bone marrow. This causes you to have low blood counts for all three types of blood cells. Low blood counts result in symptoms such as fatigue, tiredness, risk for infections, bleeding and bruising. This disease can be classified as moderate (MAA), severe (SAA) or very severe (VAA) depending on how low your blood counts are.

How many people are diagnosed with aplastic anemia each year?

Aplastic anemia can strike people of any age, race, and gender. But it is more common among children, teenagers and older adults. It is also more likely to occur in people of Asian heritage. Between 600 and 900 people are diagnosed with aplastic anemia each year in the United States.

MDS (myelodysplastic syndromes) is a group of disorders in which your blood-forming stem cells are defective and fail to make enough healthy blood cells. These diseases happen because the bone marrow cells do not develop into mature blood cells. Instead, these blood cells stay within the bone marrow in an immature state. To be diagnosed with MDS, you must have low blood counts for at least one blood cell type and your blood cells must look abnormal under a microscope. Doctors must examine your bone marrow to give you a definite diagnosis of MDS. The symptoms and the course of MDS are different for each person depending on which blood cells are affected.

How many people are diagnosed with MDS each year?

While the exact number of people who have MDS is not known, about 10,300 new cases were reported in the U.S. in 2003. This number was taken from data collected by the Surveillance, Epidemiology, and End Results (SEER) Program of the Centers for Disease Control (CDC) and the National Cancer Institute (NCI). This program only started collecting data in 2001. The number of people may be higher than reported because some doctors are not yet aware of the need to report MDS cases to a national registry. Some doctors believe that there are as many as 12,000 to 15,000 new MDS cases each year in the U.S.

We know that people diagnosed with MDS are:

* Most often age 60 or older; the average age at diagnosis is 72

PNH (paroxysmal nocturnal hemoglobinuria) is a rare and serous blood disease that causes your red blood cells to break apart. PNH occurs because of a genetic change to some of your blood-forming stem cells. These defective stem cells become PNH blood cells that are missing an important coating that protects them from your immune system. If you have PNH, there will be times where your immune system destroys many of your red blood cells very quickly. This causes low red blood cell counts. This can also cause blood clots, muscle spasms and dark urine.

How many people are diagnosed with PNH each year?

PNH can strike people of any age, race, and gender. Only about 500 people are diagnosed with PNH in the United States each year. PNH tends to be more common in young adults – those in their thirties and early forties.

What is graft versus host disease?

Graft versus host disease (GVHD) is a common complication of bone marrow/stem cell transplantation. It is caused when the donor's immune cells (the "graft"), now in the patient, begin to see the patient's body (the "host") as foreign. Typically, GVHD attacks your skin (red rash, itching), liver (elevated liver test, yellowing of skin and eyes, abdominal pain) and gastrointestinal tract (diarrhea, nausea, cramping). GVHD can range from mild to very severe. In some cases, GVHD can be prevented or treated with immunosuppressive drug therapy. Symptoms should be reported to your doctor immediately.

AML (acute myeloid leukemia) is a cancer of the white blood cells. It is defined as having more than 20 out of 100 cells in your bone marrow being young white blood cells (blasts). About 30 out of 100 people with MDS will develop AML. Certain subtypes of MDS are more likely to become AML. If you have RAEB-1 or RAEB-2 subtype of MDS, you have a greater than 4 in 10 chance of developing AML. Both aplastic anemia and PNH patients have a small chance of developing AML later in their disease.