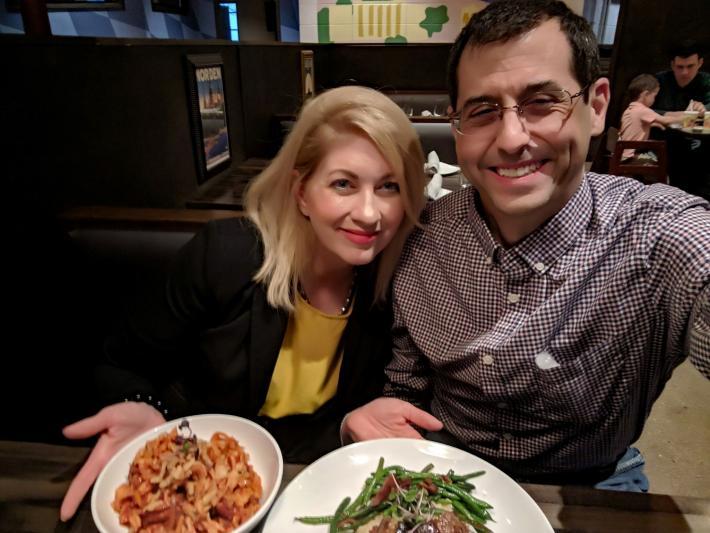 Derek was turning 45 and had noticed occasional swelling in his legs. Due to a family history of heart disease, his wife, Amy, was uneasy, noticing this symptom. She encouraged Derek to see his doctor for more thorough testing.

At the primary care physician’s office, Derek had a Complete Blood Count. The blood test showed he was anemic, but nothing else unusual. Derek’s family doctor referred him to a hematologist to look into his anemia. At the first appointment, the hematologist noted anemia, but didn’t see anything else of concern at the time. He encouraged Derek to come back in three months to re-check his values for any changes.

At the follow-up appointment, the next CBC alarmed the hematologist enough that he immediately called Derek to his office. Amy joined Derek and the doctor, who came in and said, “Derek, I think you have leukemia.” The hematologist explained that he might need to admit Derek to the hospital that same day a 30-day chemotherapy regime. In the office, he had more blood work and a bone marrow biopsy. Those results allowed Derek to go home, but he had to return the next day after genetic testing was complete.

When Derek and Amy returned, the hematologist shared that Derek’s diagnosis was high-risk Myelodysplastic Syndrome (MDS), likely to advance to Acute Myeloid Leukemia. He explained the brief life expectancy and the limited treatment options for these patients. At this point, Derek and Amy decided to seek a second opinion.

With recommendations from Amy’s colleagues, they found another hematologist. He offered to give Derek chemotherapy in an outpatient setting, for one week each month for five months. This plan, he explained, was based on studies that suggested patients who receive out-patient chemotherapy have similar outcomes to those who receive in-patient chemotherapy. He also discussed the possibility of a stem cell transplant with Derek, to provide an opportunity for a longer life.

The side effects of chemotherapy were manageable during his five months of Vidaza chemotherapy. He developed anemia, so he needed blood transfusions until his first transplant.

In June 2016, Derek was admitted to the hospital for a non-ablative stem cell transplant with stem cells from an unrelated donor. Following his transplant but while still hospitalized, Derek had a life-threatening reaction to one of the blood transfusions. By July, Derek’s CBC numbers had improved. He was discharged from the hospital, with the hope these numbers would continue to improve.

Derek didn't respond to the transplant as hoped.
During September and early October, he returned to the hospital for fevers many times. He became increasingly dependent on blood transfusions. Then, in late October, he developed a high fever. While at a routine transplant follow-up appointment, he was re-hospitalized for the third time. In November, while still hospitalized, he was diagnosed with bilateral fungal pneumonia. This illness can kill even healthy individuals. By then, it was obvious that Derek’s first transplant had not been successful, confirmed by another bone marrow biopsy.

During this time, Amy and their family and friends advocated with and for Derek. They sought a second opinion from other transplant doctors at the same hospital. These specialists recommended he have a second transplant, a more aggressive, myeloablative transplant. This would involve greater risks than the first transplant, due to his already weakened condition, but it was his only hope.

Derek remained hospitalized, receiving blood and platelets transfusions daily. November and December went by; he was still in the hospital. January saw him still hospitalized with daily transfusions. To prevent an allergic reaction like the previous one, Derek took strong medications. Between transfusions that took hours, these medications, and worsening illness, Derek was groggy most of the time. As a result, memories of his months in the hospital between transplants are indistinct to this day.

Derek notes this phase of his life by counting holidays. He re-entered the hospital with complications from his summer 2016 transplant before Halloween in 2016. Then he spent Thanksgiving and Christmas, and New Year’s Day 2017, in the hospital. He would end up staying through Valentine’s Day because his previous donor needed to rebuild her system. Though it was hard waiting, he was thankful she was willing to donate again.

During this time, the chemotherapy preparation gave Derek even more side effects. The weight loss from this course was dramatic--a total of 55 pounds – almost a third of his bodyweight! Faced with certain death if he did nothing, Derek persevered until his second transplant day.

While Derek was waiting for his second transplant, he had other symptoms. He had no platelets, so he suffered from a three-day nosebleed. He retained so much fluid in his lungs that he had trouble breathing. He had many procedures to drain liters of fluid from behind his lungs via a needle. He became too weak to walk one lap around the transplant unit. He had a GI feeding tube and a catheter, leaving him mostly bed-ridden. Yet he never gave up. Amy stayed nights at the hospital for 6 months (and had loved ones stay on nights when she could not,) while continuing to practice law. She found volunteers among their friends to sit with him from early morning until the evening when she came. Without a doubt, their friends’ support was essential to his survival during this difficult period!

Derek’s second transplant day finally arrived on a January 2017 afternoon. Derek did well enough following his second transplant that he was able to go home a few weeks after Valentine’s Day. What a long six months in the hospital! About a year after this transplant he developed Graft versus Host Disease. For treatment, Derek’s physicians enrolled him in a clinical trial before enrollment closed. The medication in the trial works in combination with other treatments to reduce the type and strength of GvHD symptoms. It worked so well that Derek returned to many of his pre-transplant activities, including his job as a technical writer, working from home.

What would Derek recommend to patients diagnosed with MDS? Derek says, “Do what the doctors recommend, listen to what they tell you to do.”