Resistance to Hypomethylating Agents in the Treatment of MDS

How common is MDS that is found to be resistant to treatment with the commonly used hypomethylating agents (HMA), azacitidine (Vidaza®), and decitabine (Dacogen®)?

The overall response rate to HMA based therapy is about 40% to 60%.  The landscape is changing slightly, particularly with the use of combination therapies, where we are getting closer to 60% to 80% overall response rates for MDS patients in clinical trials. But that still means about 25% or more patients are experiencing no improvement with these agents. This of course applies mostly to higher-risk MDS patients, because we don’t usually treat lower-risk category patients upfront with these agents. However, we have learned that patients that have not responded to HMA directed therapy (whether they are low or high risk MDS) have poor outcome/survival.

What is the difference between MDS that is refractory to hypomethylating agents and recurrent MDS that returns after successful or partially successful treatment?  Is there any understanding of why some MDS is initially resistant to these drugs and why other MDS shows an encouraging response at first, but becomes less effective later?

It is important to identify what we mean when use the words ‘refractory’ and ‘resistant’. My view is that there is a difference, and MDS that is refractory to hypomethylating agents means that patients do not respond to the treatment at all no matter how long they have been exposed to the therapy. In that scenario, we often refer to such patients as ‘primary refractory’ patients. If there has been some response to treatment with a hypomethylating agent with a meaningful benefit (such as transfusion independence) or a larger benefit (like complete remission) with subsequent loss of that response, that is defined as resistant MDS.  Biologically, there may be some difference in the MDS that is refractory versus that which initially had a response and then became resistant to treatment. I would say that the biology of refractory MDS dictates that those clinical situations are harder to treat and have worse clinical outcome(s).

Is it known why some MDS is resistant to these two quite similar drugs? Are there instances where one drug fails and the other does not?

We are trying to get a better understanding of this resistance. One of the ways I like approach this is to consider what the mechanisms of action is for the two HMA drugs.  Both 5-azacitidine and deoxy-azacitdine are thought to cause reversal of DNA methylation as well as disruption of DNA synthesis by disruption of the dNTP (deoxyribonucleotide triphosphates: dATP, dCTP, dGTP, and dTTP)  pool (building blocks of DNA).  One difference between the two agents is that azacitidine is known to preferentially incorporate into RNA, and as a result it has a direct cytotoxic effect by inhibiting protein synthesis. Both drugs enter the cell and require a special enzyme to cause phosphorylation that results in its activation For azacitidine, that enzyme is called uridine cytidine kinase (UCK), and for decitabine, it’s called deoxycitadine kinase (DCK). So these kinases causing serial phosphorylation are distinct. We have also learned that using high doses of these agents cause direct cytotoxicity and damage and using lower doses with longer exposure are optimal for the mechanism of reversal of DNA methylation.  This reversal of DNA methylation results in gene re-expression (re-expression of genes that suppress tumor growth) and directly results in killing cancer cells.

There are a few ways to envision the mechanisms of resistance to hypomethylating agents (HMA). One is that there is a decreased transport of either drug into the cell. The transporter used for this is a human nucleoside transporter, known as an hNT.  If a cancer cell wants to avoid the toxicity of the agent, then it will find a way to mutate the transporter and thus, decrease the ability of the agent to get into the cancer cell.  Another mechanism of resistance would be inactivation of the drug by disruption of key enzymes needed to activate the drugs when they enter the cell that we mentioned earlier (UCK and DCK). If the cancer cell inactivates that key enzyme (UCK/DCK) needed for drug activation, then the agent won’t be activated and therefore won’t be able to kill the cancer cell.

Cells can also learn how to increase the elimination of the HMA drug. If the cancer cell increases the ability to break down the active HMA by increasing cytadine deaminase (CDA) levels, the cancer cell can decrease its exposure to the drug by directly eliminating it, and then the cancer cell has a growth advantage and can avoid the threat from the HMA. There are some researchers that believe there are differences in men and women with regard to CDA activity and that gender affects the likelihood of response to these agents.

Other things to consider are epigenetic mechanisms of resistance. If there’s heavy methylation on the DNA strand, the HMA drug don’t work as well in that setting because it’s so cumbersome and hard to reverse the methylation burden. It is also thought that these agents can work through immune modulation through up-regulation of PD-1, PD-L1, and up-regulation of regulatory T cells. This may come into play, but is still an area of active investigation.

Is there a way to predict what patients may be refractory to treatment with hypomethlyating agents?

There’s one group of scientists that hypothesized that a cancer cell harboring mutations to decrease incorporation of HMA into the cells would be most likely to be refractory to therapy.  This group went on to examine the expression of genes encoding the nucleoside transporter proteins and metabolizing enzymes involved in the metabolism of 5-azacitidine  (5AC) in samples from primary MDS patients and correlated the data with response to 5AC and clinical outcomes.

The researchers wanted to know if the expression of the enzymes that activate azacitidine (UCK1 and UCK2) predicted clinical response(s) to azacitidine. They looked at a cohort of 57 MDS patients, and their data showed there was a higher UCK 1 mRNA expression in those patients who responded to azacitidine, as compared to those patients who did not.  They also found that patients with a lower UCK1 expression had a shorter median overall survival than high UCK 1 expression -- 19 months compared to 49 months. This seemed to be a valuable way to evaluate and predict who may have a longer response or improved survival to HMA directed therapy. Confirming this hypothesis in a prospective manner will help support this research and may help us direct therapeutic choices for our future patients.

It would be great to have markers that help us identify which patients are going respond to specific therapies. We need to do more research with regard to this. We currently have tools like the International Prognostic Scoring System (IPSS) and (IPSS-R), which help with the prognosis for a patient with MDS. Mutation status of specific genes is another tool that is coming to the forefront for evaluating patients with MDS.  For example, MDS that harbors a p53 mutation has a worse prognosis than those without a p53 mutation.

We are incorporating these molecular tools in prospective studies for our MDS patients so we can better understand prognosis and hopefully better guide treatment selections for our patients.

What follow-up treatments are there for MDS that resists therapy with hypomethylating agents, and does the next type of treatment selected depend on the risk category or classification of the MDS?

We know that for patients who fail treatment with hypomethylating agents (HMA), there aren’t great options at the moment.  This is an area of high investigational interest in pharmaceutical research and for many researchers – as it is a current unmet need. The most important thing for these future studies is to accurately define ’failure with hypomethylating agent’. We have to be able to demonstrate that the first line HMA therapy has not been effective. One important reason is that, as mentioned earlier, we think there are some differences between azacitidine and decitabine. For some patients that remain on HMA therapy but ’switch agents’ (i.e., from 5AC to DAC), it is very challenging to understand if patients have truly ’failed’ the first HMA therapy rather than the fact that they simply had continued prolonged exposure to any “HMA” therapy.

We know that high risk patients have poor outcomes after failing hypomethylating agents, and poor outcomes in the low and intermediate categories have also recently been demonstrated. For those patients, what can we do? Some patients go to a higher dose of HMA therapy, or just switch to the “other HMA” hoping that using a different kinase pathway (UCK/DCK) will help. Some patients are progressing from MDS to AML and they move to a more aggressive approach like intensive induction chemotherapy with the hope to get to bone marrow transplant.  And for other patients, enrolling onto a clinical trial is available to them and offers a therapy that they would not otherwise have access to.

Clinical trials that are focusing on novel combinations may be the best options for patients with refractory or relapsed MDS. (i.e.; PD1 inhibitor plus an HMA or single agent PD1 inhibition). All the options should be discussed with each individual patient if appropriate. It is really the patient and his/her physician’s choice to figure out what is best to for that individual patient.

What is most important for patients to remember if hypomethylating therapies aren’t successful?

First, be sure that HMA therapy is really not effective and isn’t working. Be sure that it truly has gotten its best chance, so don’t stop HMA therapy too soon. Hypomethylating agents take a while (four months) to have an effect, but patients want to know right away if it’s working. Patients should stay on the schedules exactly as prescribed and for the full duration -- don’t settle for an educated guess. The mechanism of action of the HMA is different than classic cytotoxic agents that have far fewer rounds of therapy where treatment stops much sooner. Hypomethylating therapy can go on for four, five, or six months before any improvement is seen, and if there’s a clinical response, we keep giving the HMA as long as it working. It we stop too soon, there will likely be relapse. We know that response is less likely and less robust when therapy is restarted a second time. It may work, but not as well -- so it’s really a lost opportunity if you stop your initial treatment early.
Interviewee: 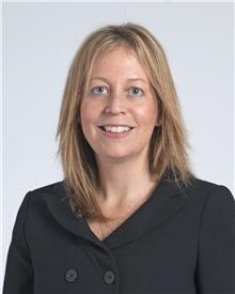 Dr. Hetty Caraway received her medical degree from the University of Massachusetts Medical School in Worcester, Massachusetts. She completed her internship and residency in internal medicine, and her fellowship in medical oncology at Johns Hopkins University in Baltimore. In addition to her medical training, Dr. Carraway earned an MBA from the Carey Business School at Johns Hopkins University in the Business of Health. She is currently a Staff Physician at the Taussig Cancer Institute in the Division of Hematologic Oncology and Blood Disorders at the Cleveland Clinic.

Dr. Carraway is American Board of Internal Medicine certified in medical oncology and internal medicine. She is a member of numerous professional organizations including the American Society of Hematology (ASH), American Association for Cancer Research (AACR), American Society of Clinical Oncology (ASCO), Eastern Cooperative Oncology Group (ECOG), SWOG, and the America College of Physicians, among others. Dr. Carraway has co-authored numerous peer-­reviewed publications, review articles, editorials, abstracts and book chapters. She is nationally sought for her expertise in hematologic malignancies. As a translational clinical scientist, Dr. Carraway’s research is focused on experimental therapeutics of acute leukemias and myeloproliferative diseases.