Although even rarer than aplastic anemia or myelodysplastic syndromes (MDS), paroxysmal nocturnal hemoglobinuria (PNH) can occur in patents having these diseases. In this interview, Dr. David Araten discusses the rare, and often complex scenario of a dual diagnosis. Here’s what patients and their doctors need to know.

Overlap Syndromes: When PNH Appears with Aplastic Anemia or MDS

How common is PNH appearing in patients with MDS or aplastic anemia?

PNH can present with MDS, but that is a much rarer occurrence. There are some features of PNH that can be confused with MDS, such as the fact that patients with PNH often also have a hypercellular marrow, and 25% of patients with PNH can have a chromosomal abnormality. So by just looking at these features, one can see how PNH and MDS could be confused with each other.

However, the PNH/MDS category should be limited only to those who have significant increase in blasts (leukemia cells), a complex cytogenetic (chromosomal) abnormality or those with monosomy-7 if they are not responding to immunosuppression.  Those would be the three types of patients that I would think have PNH/MDS, and I have seen patients like this only rarely.

There are two other overlap syndromes to mention: one is PNH/AML, which is even rarer than PNH-MDS. This would be a patient who probably had PNH/MDS, where the MDS transformed to acute myelogenous leukemia. Then there’s the very rare PNH/MPN category, only seen in a handful of patients, where the MPN stands for ‘myeloproliferative neoplasm’. In my view, this only applies to patients who have myelofibrosis (scarring in the marrow), a chronically high white blood cell or platelet count, especially if they have the JAK2 mutation.

Does PNH appear concurrently with the other diseases or does it manifest after the other diagnosis has been made?

It can be either way. With aplastic anemia/PNH, PNH can occur before, at the same time, or after the aplastic anemia is detected. With MDS/PNH, usually it’s PNH occurring beforehand, or maybe at the same time. PNH does not generally develop after an MDS diagnosis, if they didn’t already have PNH to begin with.

Are there any areas where the boundaries or definition of one disease appears to overlap with another?

Is PNH treated any differently when it appears in a dual diagnosis?

Patients with either overlap syndrome would be treated differently from a patient with only PNH. Patients having classic PNH may need eculizumab (Soliris®) or anticoagulants to prevent blood clots. Aplastic anemia patients need immunosuppression, generally being horse ATG followed by cyclosporine.

But patients with PNH/aplastic anemia overlap maybe not respond as well to eculizumab if they have a low reticulocyte count. They may need immunosuppression first, and may not be not be able to receive anticoagulants if their platelet count is low.

Conversely, for a PNH/aplastic anemia patient, there can be problems with ATG treatment. The reaction patients get with ATG can trigger hemolysis.  In patients a with large PNH red cell population who need aplastic anemia treatment, one thing to do is give them enough red cell transfusions, in order to dilute their PNH red cells so there are very few of them still there that can hemolyze when they receive ATG.  This might be two units of red cells a week every week for three weeks, for example. This could be enough to prepare someone with many PNH red cells to get ATG.

In the PNH/MDS overlap syndrome, at least in the very narrow definition I use, those patients should generally be treated with a stem cell transplant, if they have a donor. To prepare them for the transplant, it may be necessary with to treat them first with methyltransferase inhibitors to normalize their marrow, before going into a transplantation.

Are there possible complications from these treatments?

Another consequence of the overlap syndrome is the effect of the combination of eculizumab and cyclosporine. In practical terms, if a patient is on either drug, they must go immediately to the hospital if they develop a fever. For cyclosporine, this is to make sure that they do not have one of many possible infections. For patients on eculizumab, in general this would be to make sure that they do not have meningococcal infections. For patients on eculizumab who are also on cyclosporine, there is always a theoretical concern that they might not be able to make antibodies in response to a vaccination because of the effects of the cyclosporine, and that they would be doubly immunosuppressed. However, if one uses this type of caution, patients who need both can be on both.

There are rare cases where patients have a triple diagnosis – PNH, aplastic anemia, MDS. Is there anything different about these?

These are exceedingly rare, at least when the narrower definitions and criteria for overlap syndromes are applied. In the case of PNH/aplastic anemia/MDS overlap syndrome, when the criteria for MDS is excess blasts, complex cytogenetic abnormalities, or monosomy7 with lack of response to immunotherapy, these cases should be considered for a stem cell transplant. But this only applies if this criteria is used. If you have a patient with PNH/aplastic anemia, and trisomy 8, this does not give a triple diagnosis according to the strict criteria that I would use. Trisomy-8 can be seen in PNH or aplastic anemia, but it doesn’t secure a diagnosis of MDS.

Should patients with an aplastic anemia or MDS diagnosis be concerned about the possibility of also having PNH?

Then conversely, patients with PNH should be monitored for MDS, which would require a different treatment. The way to do this is to monitor blood counts. If patient with PNH has stable blood counts or is responding well to immunosuppression, then they’re presumed not to have MDS.  However, if they have falling blood counts, or if they’re responding initially to aplastic anemia treatment and their counts are coming back down, then those patients should have a repeat bone marrow biopsy because the reasons for the low blood counts could be MDS.

A falling blood count in a patient with PNH should also prompt a workup for an enlarged spleen as that can be a consequence of blood clots in the spleen or liver. A falling blood count in PNH doesn’t always mean aplastic anemia or MDS – it could be a blood clot causing an enlarged spleen. So a patient with PNH who is doing well, whose platelet counts have fallen, should have a bone marrow biopsy and a sonogram of the abdomen to check the spleen and blood flow in the abdomen.
Interviewee: 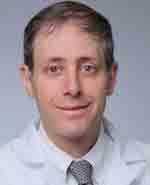 Dr. David Araten is an assistant professor in the Division of Hematology at the NYU School of Medicine in New York City. Prior to holding this position, he worked as an assistant professor and instructor in hematology at Memorial Sloan-Kettering Cancer Center, also in New York City. His residency was in internal medicine at Columbia-Presbyterian Medical Center and received his medical degree from Harvard Medical School in Boston. Dr. Araten’s research has focused largely on PNH and he has published in a wide variety of peer reviewed journals on this topic. He is also a recipient of the 1997 New Researcher Award & Vernille Family Fund Research Grant awarded by the Aplastic Anemia and MDS International Foundation.