Please explain what is meant by genomics and genomic navigation, and how genomics differs from genetics.

“Genomics” is the umbrella term for any study of chromosomes, genes, and DNA in a cell. “Genetics” is a more specific term that pertains to the study of just the 23,000 genes in a cell. The term “genomics” is a better fit when talking about MDS because MDS doctors look at whole chromosomes and specifi c genes when trying to understand each patient’s disease. DNA, housed in the nucleus of each cell, acts as the software program directing how cells grow, divide, sleep or die. Sometimes DNA gets damaged after exposure to toxins or as a normal consequence of aging. If a blood stem cell suffers DNA damage involving a gene important for blood production, then this can result in MDS. By using new machines that read DNA, we have discovered that MDS cells contain multiple genomic problems and that there is great variability from patient to patient on which genes are damaged.

We compare the DNA of MDS cells to the DNA of normal blood cells, and then we notice where the MDS cells have changed or mutated from their normal state. Depending on what DNA in the MDS cells have mutated, this can tell us how aggressive or responsive to treatment the MDS cells will be. Genomic “navigators” such as genetic counselors and doctors with specialized knowledge of cancer gene mutations help patients and other doctors understand the clinical significance of the genomic mutations. They provide information about disease origin, prognosis, treatment options, and risk of passing on blood problems to children.

In the past with MDS, the way we approached it was like taking a trip with a poorly detailed paper map showing only major highways and cities and vast expanses of blank space. Making a decision on which of the few roads to take was simple, but the small number of roads rarely took us where we needed to go. However, with the new genomic information we have, our MDS map is fi lling in, much like what you see with detailed online maps. We now have “street view” images, where we are seeing MDS gene mutations, chromosome breakages, methylation patterns, and other molecular level details like we have never been able to before. Our new MDS maps are much more detailed, specific to the patient, and prompt us to talk about more than the few approved drugs that are available for treating MDS. Another impact of new molecular information is the power it brings in cinching the diagnosis of MDS. In the MDS clinic, we often have a very basic question: does the patient actually have MDS? A simple blood draw could help confirm the diagnosis when using the new DNA reading machines. Finally, this new understanding of MDS genomics is helping predict aggressiveness of the disease and chances of responding to treatment. Certain MDS mutations in genes (like the gene TP53 that is buried in chromosome 17) indicate more aggressive disease and may call for more aggressive treatment such as allogeneic hematopoietic cell transplant.

What specific advantages are there when genomics is applied to MDS?

There are situations where patients and doctors aren’t completely sure if the patient has MDS or not. The patient may have low blood counts, and their physician has ruled out a list of all other possible causes, such as bleeding and deficiencies in vitamins and minerals. The bone marrow biopsy may suggest MDS, but the chromosome testing may not detect an abnormality, which happens in half of MDS patients. In this common situation, patients and doctors are rightfully frustrated about whether MDS is present or not.  Using the new DNA reading machines can help patients and doctors decide whether the patient actually has MDS. Sometimes a simple blood test can pick up MDS gene mutations, and this will confirm the diagnosis.

Once we identify the MDS genetic mutations for each patient, at that point, the enemy is marked and we can follow those enemy clones by looking for their markings in subsequent blood and bone marrow specimens. Enemy identification and tracking is one important facet of ‘personalized medicine.’ Genomics is personalized in MDS because each MDS patient’s DNA damage is different than that of other patients.

The current MDS classifi cation system, which is largely based on older light microscope technology, tries to lump together the many presentations of MDS into groups that doctors and patients can talk about in a clear manner. The number of classifications has grown steadily over the past several years out of frustration by MDS doctors in trying to honor the newly appreciated personalized nature of MDS with a continuing need for an organized system to clearly communicate the many subtypes of MDS. In the coming years, we will see more MDS genomic information included in the MDS classifi cation system and this will bring even greater value to the MDS classification systems.

Can a patient see the results of this progress in the office/treatment setting?

If an MDS patient has certain genomic mutations in their blood cells that predict for aggressive disease, then those patients will be treated diff erently in the clinic. They may be seen more often in the clinic, have labs drawn more frequently, possibly require more blood transfusions, and may be offered chemotherapy or possibly an allogeneic hematopoietic cell transplant. A patient with lower-risk MDS genomics may be seen less often initially and is provided supportive care until evidence of disease progression. The intensity and activity of the care will be more proactive because of what was learned from the MDS genomic landscape.

What is important for health professionals treating MDS to know about test results from genomic cell analysis?

The fi rst thing they should know is that there are now several pathology laboratories that just in the last few months have created new genetic testing panels for patients who are suspected to have or currently have MDS. I recommend that referring physicians consider sending a patient’s bone marrow aspirate or peripheral blood sample to one of these labs, in the event they want to rule in or rule out an MDS diagnosis. In addition, doctors may find helpful the extra information that MDS genetic testing brings to define prognosis or actionable mutations. As examples, genetic mutations in TP53 portend for a more therapy-resistant MDS, and if a patient has mutations in IDH1 or IDH2, then the patient may qualify for ongoing clinical trials of IDH inhibitors.

If hematology-oncology physicians receive a genomic report that is confusing (and many of them can be), I encourage the physician to contact an MDS specialist at one of the specialized MDS centers. The specialist will help clarify the genomic mutations and help determine if they are clinically meaningful. As an MDS specialist, I’m happy to help interpret reports because it gives me the satisfaction of making sure patients have as much information as possible to make their best treatment decision. I see a day soon when community hematologists-oncologists will be able to access MDS and leukemia specialists from afar for quick online consults and assistance in identifying relevant clinical trials. This could help patients by opening access to the latest data on molecular testing and pointing to cutting edge treatments.

What is most important for MDS patients and families to know about the present and potential applications of genomics in MDS?

It’s important for patients to ask their doctor for their MDS genomics report. Also, they should ask their doctors to spend time explaining how that information informs their diagnosis, prognosis, and treatment. Patients should ask questions to understand at least the broad brush strokes of what these reports mean and how that information forms the basis for a treatment strategy. Many patients are reticent to ask for this time because chromosomes, genes, and DNA can be confusing, and it takes time to explain normal function, let alone mutation, and we respect our doctors’ busy schedules. But patients need to know this information and its significance before they leave the doctor’s office.
Interviewee: 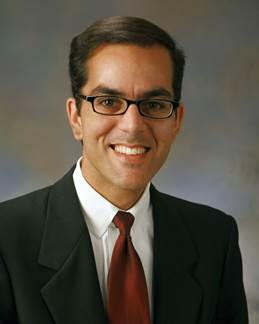 Dr. Cogle is an associate professor of medicine at the University of Florida, Gainesville. He has clinical and research expertise in myelodysplastic syndromes (MDS), acute myeloid leukemia (AML), and allogeneic hematopoietic cell transplant. Dr. Cogle leads a research laboratory that studies the biology of MDS and AML, and his group has successfully translated his discoveries into new treatments for patients. Dr. Cogle’s goal is to fi nd cures for MDS and leukemia, educate patients and providers about the distinct heterogeneity of these diseases, educate policy makers that blood cancers are a public health concern, and advocate for patients to get the best care possible.